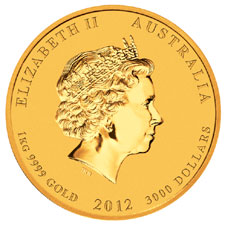 The latest monthly sales figures are available for gold and silver bullion sold by the Perth Mint of Australia as coins and minted products. The sales for gold showed an increase from the prior month, while silver showed a decline.

The Perth Mint has only been reporting monthly bullion sales figures since March of 2012, so year over year comparisons are not available.

Gold bullion sales measured 37,196.86 troy ounces, representing an increase of 9.32% from the prior month.

Silver bullion sales were 338,945.22 troy ounces, representing a decline of 25.13% from the prior month. This was also the second lowest monthly sales level since the start of reporting.

Rather than an indication of slackening demand for silver, the lower sales may be related to the release of the 2013-dated gold and silver bullion coins which took place on September 3, 2012. On that date, the Year of the Snake and Australian Kookaburra coins went on sale. It is possible that purchases may have been delayed in order to acquire the newer designs. The next available sales figures should be revealing.

The Perth Mint has indicated that just days after the official release, the one ounce gold and silver bullion Year of the Snake Coins were on pace for a rapid sell out.