The Perth Mint is releasing a 1 oz Silver Proof Coin Set to celebrate the 200th anniversary of the historic Australian Holey Dollar and Dump. The two coin sets have a limited mintage of just 4,000 worldwide.

The Holey Dollar and Dump were the first coins struck in New South Wales. They were created as a solution to the short supply of coinage in the colony in the early 1800’s. Governor Macquarie authorized the issue of the colony’s own currency which was created by punching the centers out of 40,000 Spanish dollars that the British Government had purchased in Madras through the East India Company. The outer ring (Holey Dollar) and the center (Dump) were counter-stamped with the name of the colony and their new monetary values of five shillings and fifteen pence. The coins were created in 1813 and remained in official circulation until 1829 when they were demonetized. 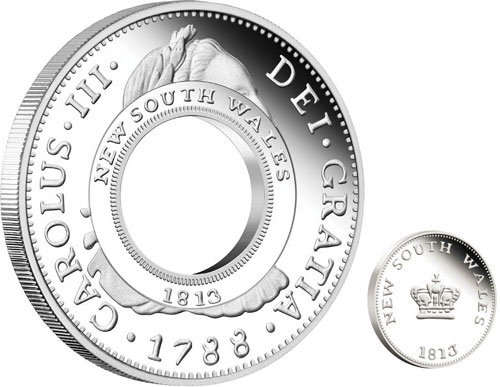 The 200th Anniversary of the Holey Dollar & Dump Silver Proof Coin Set includes coins with designs which replicate the originals. The reverse of the Holey Dollar replicates the original dollar including the outer inscription “Dei Gratia 1788 Carolus III” and inner inscription “New South Wales 1813″. The obverse carries the Ian rank Broadley effigy of Queen Elizabeth II with the “2013″ date and legal tender denomination of “1 Dollar”. This coin measures 40.60 mm in diameter and has a weight of 25.188 grams.

The Dump replicates the original dump carrying a crown and inscription “New South Wales 1813″. The obverse features the portrait of Queen Elizabeth II with the date and denomination of “25 cents”. This coin measures 17.60 mm in diameter and has a weight of 5.947 grams. 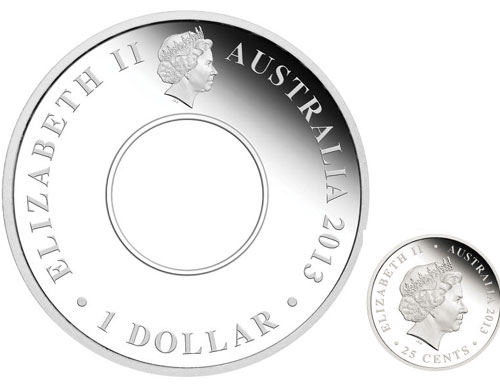 Both coins are struck in 99.9% pure silver to proof quality and together contain 1 troy ounce of silver. With a mintage of 4,000 worldwide, the sets are presented in a display case with illustrated shipper and numbered certificate of authenticity.

For more information or to place an order, please visit the Perth Mint product page.