The Perth Mint of Australia has created a special 2012 Year of the Dragon Silver Coin for the World Money Fair held in Berlin. The coin has a limited mintage and features a water dragon reverse design. 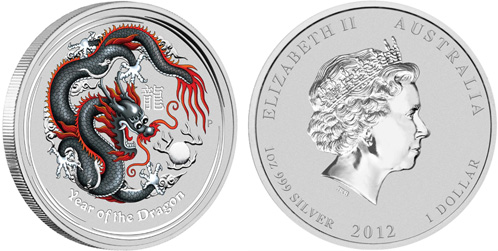 People born between the dates of January 13, 2012 and February 9, 2013 are said to be born in the Year of the Dragon. The dragon is the only mythological creature included within the Chinese zodiac. People born in dragon years are said to be confident, enterprising, independent, self-assured, brave and passionate.

The 2012 Year of the Dragon Silver Coin released for the World Money Fair features a black dragon with red detailing. The color black is regarded as highly spiritual and has a significance and connection to the element of water. The reverse inscriptions include the Chinese character for dragon and “Year of the Dragon”.

The obverse of the coin features the Ian Rank Broadley effigy of Queen Elizabeth II, along with the “2012” date, silver content, and legal tender face value.

The present release is limited to 5,000 and carries an order limit of one per customer. Each coin contains one ounce of 99.9% pure silver and comes in special coin show packaging with a numbered certificate of authenticity.