The Perth Mint of Australia has launched a new five-coin series featuring mystical creatures. The first one ounce 99.9% silver proof coin features the Griffin, which is part eagle, part lion and known for its bravery and strength. 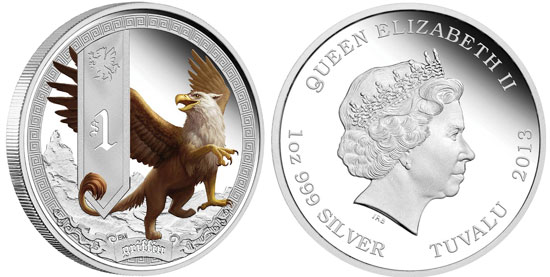 The 2013 Griffin 1 oz Silver Proof Coin features a colored description of this mythical creature with the head and wings of an eagle and the body of a lion. The griffin is known for its courage, strength, and speed, and often represented as a guardian of priceless possession, justice, and divinity. A backdrop of mountains and sky appears in the background of the design, with the denomination of “$1” and “griffin” inscribed.

The obverse of the coin features the Ian Rank Broadley effigy of Queen Elizabeth II, along with the silver purity, content, and “2013” date. The coins are issued as legal tender in Tuvalu.

Each coin is housed in a presentation case and illustrated shipper with a numbered certificate of authenticity. The mintage is limited to 5,000 pieces and Coin Club Australia will make a donation of $1.00 to UNICEF-Australia for each coin purchased under the program. The next release of the series will feature the Unicorn.