The Perth Mint has started accepting orders for the 2015 Australian Sovereign Gold Proof Coin. This is a customized version of the original Sydney Mint Sovereign, representing a modern adaptation of an important part of Australia’s history.

Following the discovery of gold in the colony of New South Wales, the Sydney branch of the Royal Mint would be opened on May 14, 1855. The first Type I sovereign featuring a unique colonial design was produced on June 23, 1855 beginning an unbroken 76 year history of gold sovereign production in Australia. More than 400 million coins were created in Sydney and the branch mints later opened in Melbourne and Perth. During this period, the Perth Mint alone produced more than 106 million of the coins.

After a 78 year hiatus, production of coins bearing the sovereign title was resumed at the Perth Mint in 2009, with proof quality coins struck for collectors in limited mintages. 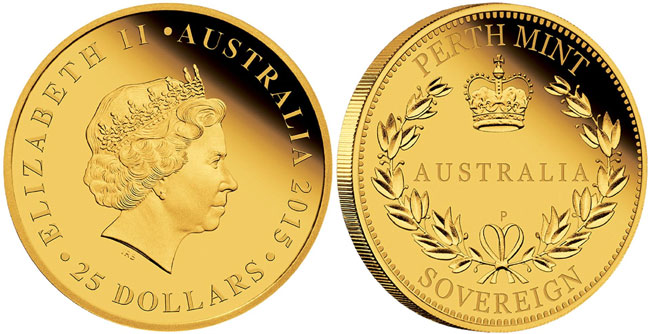 The reverse design of the 2015 Australian Sovereign portrays St. Edward’s crown and a laurel wreath surrounding the word AUSTRALIA. The modern tribute also includes the additional inscriptions PERTH MINT and SOVEREIGN. The obverse of the coin features the Ian Rank-Broadley effigy of Queen Elizabeth II with the denomination of 25 DOLLARS and the 2015 date.

Coins are housed in a prestigious wooden presentation case with an illustrated shipper and numbered certificate of authenticity. For additional information or to place an order, please visit the Perth Mint product page.