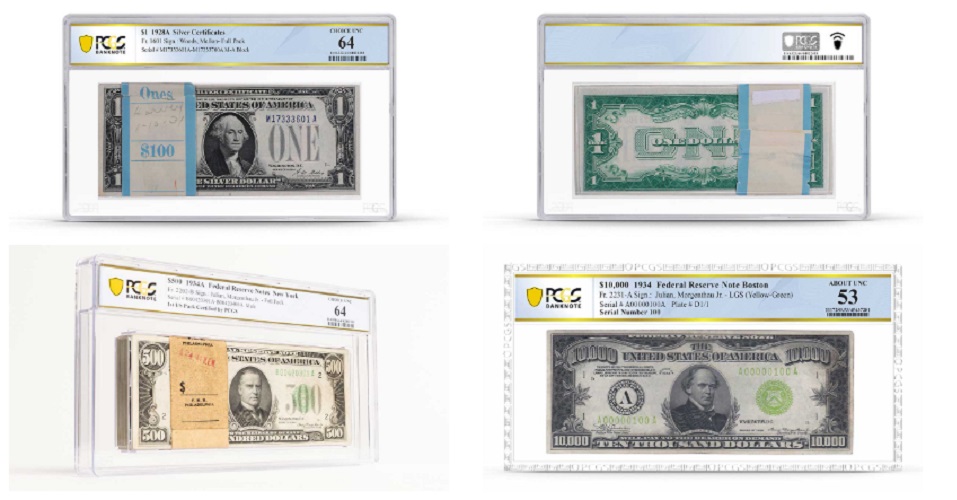 PCGS begins grading full and half packs of U.S. small-size notes and unveils a new holder for smaller notes

(Santa Ana, California — June 7, 2022) Professional Coin Grading Service (PCGS) has officially launched pack grading for those who wish to submit their banknote packs for encapsulation. The innovative PCGS pack holders, which allow for half (50) or full (100) consecutive serial-numbered banknotes to be encapsulated in a single holder, are ideal for grading banknote packs whose historic or collectible significance is better maintained by keeping the notes physically together.

“The benefit of grading an entire pack of banknotes rather than individual notes has a lot to do with certain collectible characteristics that are unique to packs of banknotes, such as keeping together a run of notes with consecutive numbers, consecutive Star Notes, and the like,” explains PCGS President Stephanie Sabin. “There are even cases where a pack of notes may be historical or collectible for other reasons, such as having an origin associated with a bank hoard, a notable collector, or other numismatically significant factors.” She adds, “pack grading is similar to how some people collect sealed packs of trading cards and how those are often holdered in a single pack — it preserves their collectability in a way that might be lost if the items are separated and encapsulated individually.”

In addition to the rollout of pack grading, PCGS also unveils its new small-size note holder.

“Collector and dealer feedback led to our decision that we should provide a holder specifically designed for these notes,” remarks Sabin. “So many of the submissions we received are U.S. small-size notes, Fractional and postage currency, and other notes from around the world that are smaller than the large-size notes our holders were designed to accommodate. With these new holders, PCGS offers a right-sized solution for a wide variety of banknotes.”

Director of PCGS Banknote Joe Pielago explains, “PCGS is always looking for the best solutions to provide the ideal holder for some of the smallest and most unusual notes. We are proud to innovate our offerings to the market to continue providing premium products. We are always listening to customer feedback, and this was another offering the market requested that we are excited to provide.”

All PCGS Banknote holders will continue to include anti-counterfeiting Near-Field Communication (NFC) technology, which PCGS introduced to the numismatic industry to ensure future buyers and collectors that the contents of their holders are as stated on the labels.

Since 1986, PCGS has proven a successful track record for introducing new products and solutions to the market, and the pack holder is no exception. Earlier this year, the very first pack to be encapsulated in the new multi-note holder was a full 100-note consecutively numbered pack of Series 1934A $500 Federal Reserve Notes. Submitted by U.S. Coins of Houston, Texas, and pedigreed to the prestigious Taylor Family Collection, it is one of the oldest-surviving packs of banknotes and presumably, the only pack of $500 notes known in existence. Before being submitted to PCGS for crossover service, these notes were each encapsulated and graded individually by another grading service.

Currently, pack grading is available for U.S. small-size notes in the quantities of a complete full pack of 100 notes or half packs of 50. All notes in the pack are examined by graders, and a single grade is granted as a composite for the entire pack. However, the stated grade does not guarantee that any single given note within will grade at that level if it were submitted individually. Each pack is a single grading fee based on the declared value of the pack with an additional $60 fee for the unique new pack holder. More information and guidelines for submitting packs are available here.

Professional Coin Grading Service (PCGS) is a third-party coin and banknote grading company that was launched in 1986. Over 35 years, PCGS has examined and certified nearly 50 million U.S. and world coins, medals, and tokens with a combined value of over $48 billion. For more information about PCGS products and services, including how to submit your coins for authentication and grading, please click here or call PCGS Customer Service at (800) 447-8848.