The 1899 $1 Silver Certificate a survivor of the S.S. Titanic had in his pocket a century ago when he was rescued from the Atlantic Ocean, and then was later inscribed by him, has been certified by PCGS Currency (www.PCGSCurrency.com).

“Just being able to handle this note that was carried by a survivor of this disaster through what must have been terrifying circumstances was as exciting as any moment in our company’s history,” said Laura A. Kessler, Vice President of PCGS Currency. “Examining the note brought to mind how much significance was involved in its survival.  It was literally ‘history in our hands.'” 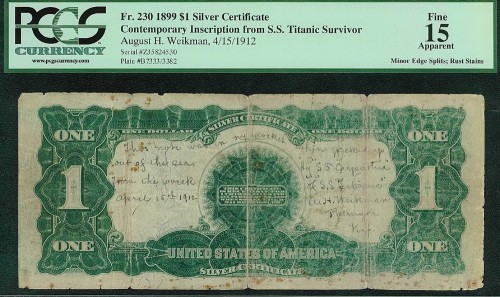 The dollar bill was carried by 50-year old August (Augustus) H. Weikman of Palmyra, New Jersey, a barber on the ship, who was helping crew members launch lifeboats from an upper deck when one of the ship’s boilers exploded and he was blown into the water. Weikman survived and later wrote on the back the dollar bill: “This note was in my pocket when picked up out of the sea by ‘S.S. Carpathia’ from the wreck of ‘S.S. Titanic’ April 15th 1912/A.H. Weikman/Palmyra, N.J.”

It was submitted to PCGS Currency by RR Auction company of Amherst, New Hampshire (www.rrauction.com) which is offering it in a public auction of Titanic items that closes on April 26, 2012.

“The note is circulated as expected, but its historical significance far outweighs its grade,” Kessler explained.  “This is the first time any Titanic-related paper money has been independently certified by one of the third-party currency authentication services.” 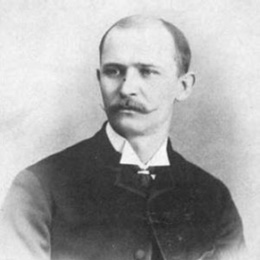 Contemporary newspaper accounts captured the horror and drama of what happened when the Titanic struck an iceberg late on the night of April 14, 2012 and sank a few hours later in the dark on April 15.  Weikman was quoted in some of those stories, and told how he survived.

The Camden (New Jersey) Daily Courier newspaper reported on April 20, 1912: “The barber stood with the rest of the brave men on the ship and expected to go down with the rest of them, when the explosion threw him into the sea with scores of other men.”

A story in the April 19, 2012 edition of the Camden Post-Telegram quoted Weikman on how he survived: “A bundle of deck chairs, roped together, was blown off the deck with me, and struck my back, injuring my spine, but it served as a temporary raft.”

“The water was too cold for me to swim and I was hardly more than 100 feet away when the ship went down.  The suction was not what one would expect and only rocked the water around me.”

The newspaper also reported that Weikman “…was one of those who heard the ship’s string band playing ‘Nearer, My God, to Thee’ a few moments before she went down.”

He was on the make-shift raft for two hours until he was rescued by the crew of the Carpathia.  He told a U.S. Senate committee on April 24, 1912, “While on the chairs I heard terrible groans and cries coming from people in the water.”

Weikman died in November 1924.  The note he carried and later inscribed was sold at a 1999 auction conducted by Butterfield and Butterfield.

“PCGS Currency is honored to authenticate and grade this piece of history, but even more important we are delighted to be able to protect and preserve this note for future generations by sealing it in our fully inert and archivally safe holder. Whether it’s a note from the Titanic, a Disney Dollar, or a ‘Grand Watermelon’ worth millions of dollars, There is no safer way to store any collectible note than in a PCGS Currency holder,” said PCGS President Jason W. Bradford.

Since its founding in 2005, PCGS Currency has authenticated and graded more than 400,000 notes. For additional information, call (309) 222-8200 or visit online at www.PCGSCurrency.com.