“It is always exciting when major new discoveries are made. There may still be many great things yet to be found and enjoyed in numismatics,” added Willis. 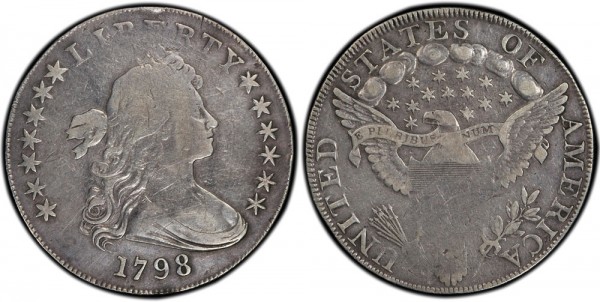 PCGS attributes early U.S. dollars, 1794 to 1804, by both Bolender (B) and Bowers-Borckardt (BB) reference numbers.

In 1950, Milford H. Bolender published The United States Early Silver Dollars from 1794 to 1803, a reference book based on his own specialized collection of Bust dollars. The book was revised by Jules Reiver in 1998.

A second, widely used reference book, Silver Dollars & Trade Dollars of the United States: A Complete Encyclopedia, Vol. One, was authored in 1993 by Q. David Bowers and Mark Borckardt. Borckardt, Senior Numismatist and Cataloger at Heritage Auctions, assisted PCGS with the attribution of the discovery coin, and believes it was struck during the early die state of both dies.

The coin now has been certified as PCGS Cleaned With VF Details. It immediately attracted attention in the grading room at PCGS headquarters in Orange County, California.

“Some in the grading room were fascinated! It is not every day something new is discovered in U.S. numismatics, and there was a bit of a buzz,” recalled Steven Poliquin, PCGS Grader/Variety Attributor. “It is a good feeling to be a part of something that is new and exciting. I hope this coin fits well into someone’s collection.”

There was speculation for decades that this die combination might exist, and now that conjecture has become fact.

Colorado collector and early American dollars researcher W. David Perkins, who also assisted PCGS with the coin’s attribution, stated: “It is somewhat important to note that the strike on the reverse of this new 1798 B-34, BB-126 die marriage is very similar to the strike on the 1798 B-18, BB-103. There are only six specimens of the extremely rare B-18, BB-103 die marriage known to me. All six are in lower grades, and have a similar strike and look. All are in lower grades with the finest known graded PCGS F15.”

“Although we don’t have a new die state showing massive die failure for 1798 B-10, BB-109 die marriage, as was anticipated, we now know that this reverse die was used at least one other time, in striking the new 1798 B-24, BB-126 die marriage,” said Perkins.

For additional information about PCGS and its services, visit www.PCGS.com or call PCGS Customer Service at (800) 447-8848.