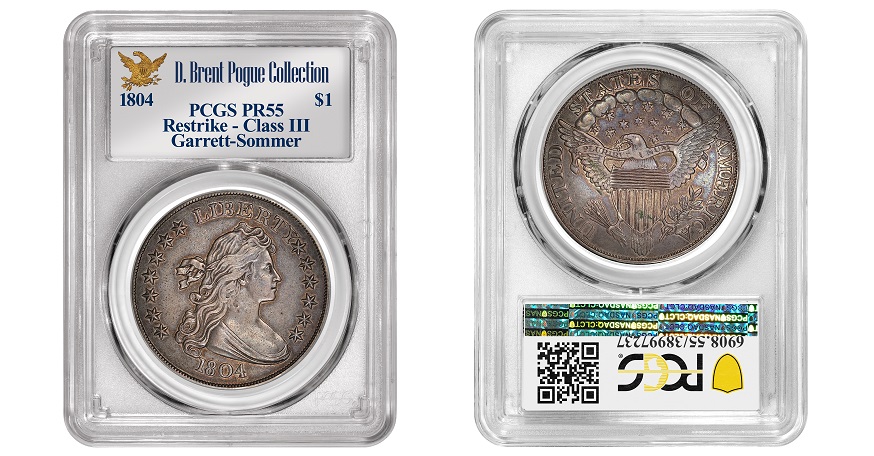 (March 25, 2020) — Known as “The King of American Coins,” an 1804 United States Draped Bust dollar certified by Professional Coin Grading Service (PCGS) as PCGS PR-55 was sold for $1,440,000 by Stack’s Bowers Galleries on March 20, 2020. The Class III 1804 silver dollar was from the estate of the prominent late collector D. Brent Pogue and previously had been in a dozen other great collections, including those of the Garrett family and Johns Hopkins University in Baltimore.

The buyer is Blake Duncan of Houston-based U.S. Coins, who bought the coin for a client who wishes to remain anonymous.

“The 1804 dollars are well-known for their rarity and historic significance among collectors as well as many non-collectors,” PCGS President Brett Charville remarked.

Because of the health concerns due to the virus pandemic, the auction was relocated from the planned site of the Spring Whitman Expo in Baltimore, Maryland, to the Stack’s Bowers Galleries headquarters in Santa Ana, California. “Even with virtually no bidders physically present on the auction floor and the sudden economic uncertainty — things nobody could have predicted just a few weeks earlier — the outstanding sale of this 1804 Draped Bust dollar unequivocally demonstrates that collectible coins graded by PCGS have perennial value, security, and liquidity,” stated Charville.

Although dated 1804, the coin was struck sometime between 1859 and the late 1870s, according to researchers. There are only 15 known genuine 1804 U.S. dollars, and only six of them are Class III examples. One of those six is permanently housed in the National Numismatic Collection at the Smithsonian Institution in Washington, D.C.

The 1804 Draped Bust dollar first gained prominence after a handful of Class I examples were included in special coin sets given to heads of state as diplomatic gifts on behalf of President Andrew Jackson during the 1830s.

While the 1804 Draped Bust dollar stole the spotlight at the Stack’s Bowers Galleries March 2020 D. Brent Pogue Collection Part VII auction, it wasn’t the only PCGS-graded coin to cross the seven-figure threshold. The 1854-S Liberty Head half eagle, a gold coin with a face value of five dollars and the first such coin struck at the San Francisco Mint, realized $1.92 million at that same sale. Graded AU-58+ by PCGS, the gold coin was once in the famed Louis Eliasberg Collection and had not been offered for sale for nearly 40 years.

Professional Coin Grading Service (PCGS) is the premier third-party coin and banknote grading company that was launched in 1986. Over nearly 35 years, PCGS has examined and certified some 43.3 million U.S. and world coins, medals, and tokens with a combined value of more than $37.2 billion. For more information about PCGS products and services, including how to submit your coins for authentication and grading, please visit the website of PCGS or call PCGS Customer Service at (800) 447-8848.