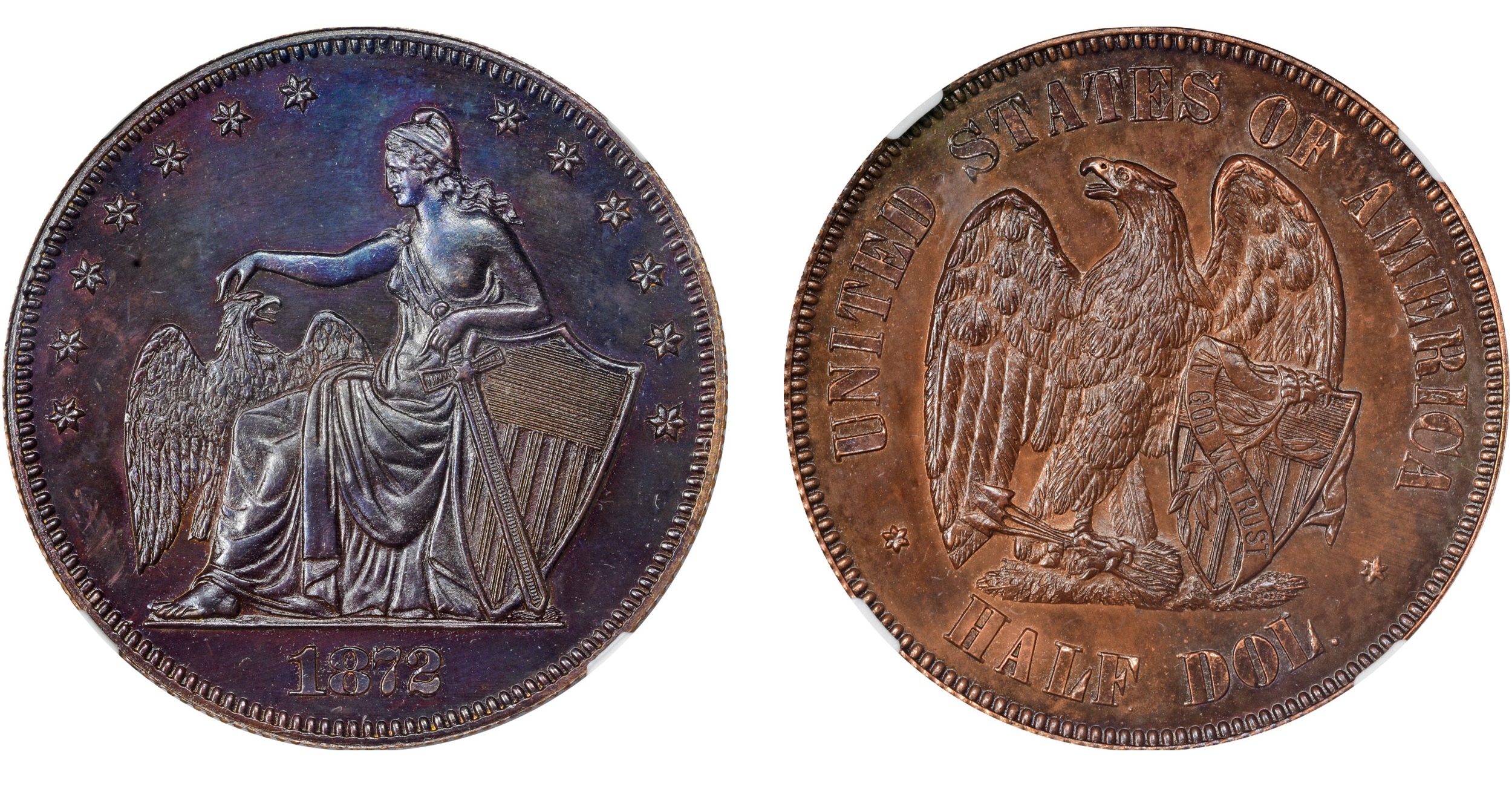 Image by the Professional Coin Grading Service. Hover to zoom.

“Once again our official ANA auction provides something for everyone who collects American numismatics,” declared Don Kagin, president of Kagin’s Auction. The auction is held in conjunction with the American Numismatic Association’s National Money Show in Irving, Texas March 8-9, 2018.

The sale commences with the Colonial series featuring a number of early issues from Massachusetts, Maryland, and Connecticut highlighted by the Finest Known 1737 Higley Three Hammers.

Other tokens and medals, including a set of Norse pieces, precede the federal coinage. The latter includes many popular types of coins such as a 1793 chain cent, over 40 two-cent pieces, a 1792 half dime, an 1844 Orphan Annie dime and a 1796 25c — all of which are well within the means of the average collector. High-end rarities include an 1818/5 Gem off-centered quarter from the Boyd/Stack collections and the Proof 1842 half dollar. A small but interesting assortment of gold coins, including a Proof-64 Ultra Cameo 1898 $2 1/2, will also be offered.

One of the featured collections of this sale is over 50 patterns from the Dr. George Barber collection. The star of this series is possibly the finest 1872 copper Amazonian half. These are followed by Dr. Barber’s So-Called Dollar collection.

No Kagin Auction sale would be complete without some pioneer gold and selections from shipwreck treasure. This series is highlighted by two gold ingots from Kellogg & Co. and Harris, Marchand & Co from the S.S. Central America shipwreck. Miscellaneous California gold and Hart tokens close this session.


The auction includes a number of fractional currency notes and several errors. These are followed by the Michigan Collection of Encased Postage Stamps which offers 145 different varieties of this intriguing series that bridges both the numismatic and philatelic world. All the rare merchants including Miles, Claflin, and Sands Ale are represented as well as all denominations including one of four known two-cent “Blackjacks.” Many are the finest specimens known.

The final session features the Carlson R. Chambliss collections of Federal Reserve bank notes. There are fully 84 FRBN varieties including the ever popular St. Louis $50. The Federal Reserve section includes 175 individual variety lots as well as several multiple lots. Every note is a distinct variety and believed to be part of the most extensive collection of these series offered since the Jim Thompson sale over a decade ago. Many of the notes, including the scarce red seals, are among the finest known and some may be the only collectible example available.

All lots are unreserved.

Besides free online memberships to the ANA for all who register and other free reference books to successful purchasers, Kagin’s offers a Loyalty Program of 1% of your purchases back in credit toward their next two auctions.