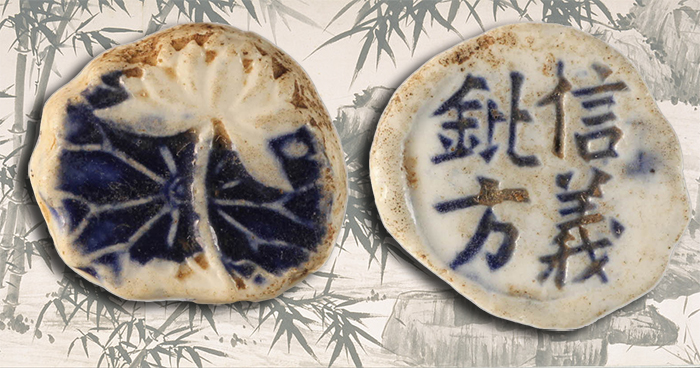 A porcelain token, called a “pee,” with a design in the shape of a lotus leaf. (Photos courtesy of the British Museum)

Times of emergency such as war, recession, or other economic crises, often result in shortages of metal. Occasionally, this has led to the use of non-metal materials for coins and tokens, such as the wooden nickels of Depression-era Washington. One of the most interesting materials used in lieu of precious metal was porcelain. The two most famous instances of porcelain coins are the gambling tokens of 18th and 19th century Siam and the German notgeld of the early 1920’s.

Siamese gambling tokens were produced in the mid 18th century and in use until 1875. They were made in China (hence the use of Chinese characters on the coins) for use in private gambling establishments in Siam. However, the locals began to use the tokens as legal tender.

According to a post on the Collectors Society website, “the gambling houses were ‘tax farms’ where every year, or some say every three years, the government accepted bids for the right to operate the gambling monopoly for the next period. There were between 500 and 1,000 different firms called ‘hongs’, that issued tokens. To reduce counterfeiting, issues were recalled frequently, and new pieces were issued to replace them. More than 10,000 different varieties are known. They were issued in denominations of from one Att to one Salung. It is believed that between 2,000 and 6,000 pieces of each design were minted.” The tokens were created in a stunning array of colors, shapes, and patterns.

In his monograph, Siamese Porcelain and Other Tokens (available in full online from the Cornell library), H.A. Ramsden quotes Joseph Haas’ book Siamese Coinage: “These counters being issued under authority granted in the gambling licence or concession, they rapidly became a medium of exchange, and were found to fill a long felt want of small money so well, that the circulation went much beyond its legal sphere.” …

To read more about the Siamese gambling tokens, or about the German notgeld, head over to the Past and Present blog, which also has a link to an incredible collection of token images.   ❑