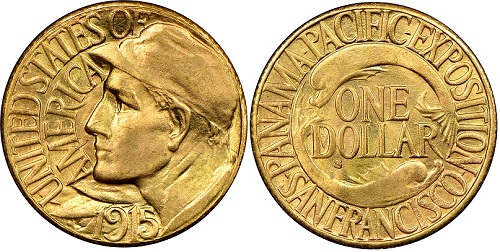 We covered the 1915 Panama-Pacific Commemorative Half Dollar in a previous article, and now it’s time for the gold coins that were struck in honor of the same event. Four of gold issues were struck, ranging from a tiny gold dollar to two massive fifty-dollar pieces, with a quarter eagle produced as well. The gold commemoratives celebrated the completion of the Panama Canal and were struck in conjunction with the Panama-Pacific International Exposition. They are among the most popular of all of the thirteen gold commemoratives issued between 1903 and 1926. In this article we will discuss those four coins, which celebrated their 100th anniversary last year.

The 1915 Panama-Pacific International Exposition was held in San Francisco, California, from February 20, 1915 to December 20 of the same year. In those 10 months more than 19 million people visited the showing, making it one of the most successful expositions ever. The Panama Canal was completed in 1914 and drastically shortened the sea journey from the East Coast to the West Coast of the United States.

Five different coins of four denominations were authorized by the Act of January 16, 1915, something that had not been done before. A souvenir medal was also issued. The coins were to be issued by the Panama-Pacific International Exposition Coin and Medal Department, and were the first commemoratives to be struck at a branch mint — the San Francisco Mint in this case .

The smallest of the four gold denominations was the fifth commemorative gold dollar struck in the 20th century. Twenty-five thousand pieces of this denomination were struck at the San Francisco Mint starting in June of 1915.

Designs for the gold dollar were created by Charles Keck. The obverse shows a head of one of the workers of the Panama Canal, facing left. In front of him, curved, is UNITED STATES OF AMERICA in two lines, and 1915 is below. The fields have a somewhat worked look. The reverse features ONE DOLLAR in two lines in the center. Above and below are two dolphins. This design is circled by the text PANAMA-PACIFIC EXPOSITION SAN FRANCISCO. A small “S” indicating that the coins were struck at the San Francisco Mint is located below the left part of the O in DOLLAR.

The original envelope in which many of the pieces were distributed noted that the head on the obverse represented “labor through whose efforts the Panama canal became a reality,” and the two dolphins on the reverse represented “the meeting of the two oceans.”

The gold dollar was offered to the public at $2 each, or in sets with several of the other denominations for various prices (more on those later). When sales came to a standstill, 10,000 coins were returned to the San Francisco Mint for melting, leaving a net mintage of 15,000 coins.

Today this issue is one of the more available gold commemoratives, but high demand for the coin keeps prices high. High grade pieces up to MS-66 are generally available, and even pieces grading as high as MS-67 are occasionally offered. At those grades, however, this proves to be a very difficult coin to acquire. A re-punched mint mark is noted for completeness, but since few collectors collect early (gold) commemoratives by variety, there is little-to-no premium for those pieces. 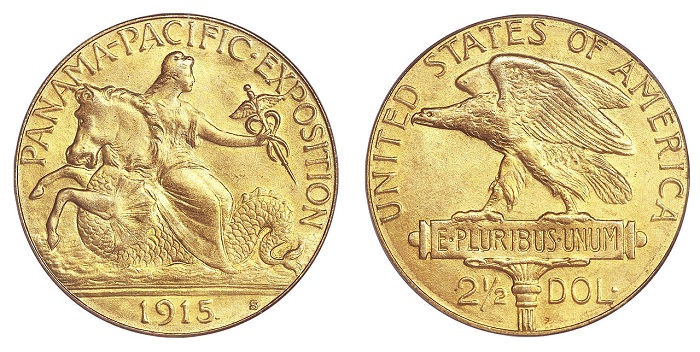 One of only two gold commemoratives of this denomination (the other is the 1926 sesquicentennial commemorative) the 1915-S Panama-Pacific quarter eagle is a very popular issue that was designed by Charles E. Barber (obverse) and George T. Morgan (reverse).

On the obverse is one of the most elaborate designs that ever appeared on a United States coin. It features Columbia seated on a hippocampus, a mythical sea horse, holding a caduceus, regarded as an emblem of trade and commerce. According to the original envelope, this scene was meant to “invite the nations of the world to use the new way from ocean to ocean.” The scene is surrounded by the words PANAMA-PACIFIC EXPOSITION.

The reverse shows an eagle, standing with its wings spread, facing left. It’s placed on a standard, which is inscribed with the motto E PLURIBUS UNUM. Next to the standard is the denomination 2 ½ DOL. Surrounding the scene from approximately 9 to 3 o’clock is UNITED STATES OF AMERICA.

Morgan had first used this particular design as early as 1877 on pattern half dollars that would eventually result in the design of the Morgan silver dollar, first released for circulation in the following year. The design also appeared on a very rare 1879 silver dollar pattern known as the “Schoolgirl” dollar, as the depiction of Liberty on the obverse.

The quarter eagles were offered for sale individually for $4 per coin; 10,000 were struck at the San Francisco Mint (the mint mark is in the lower right field of the obverse) in June of 1915. Like the gold dollar, not all were sold, and 3,251 coins were returned to the mint and melted, leaving a net mintage of 6,749.

This issue is very popular with modern-day collectors, and it appears that much of the original mintage has survived in Uncirculated condition. High demand, however, has driven up prices, and with the majority of coins peaking at the MS-64 level it should not come as a surprise that coins graded MS-65 and MS-66 are much in demand. Grading companies have also labeled a sizable number of coins as high as MS-67; demand for those coins is strong, perhaps fueled by the intricate design.

The two fifty-dollar gold pieces struck to commemorate the Panama-Pacific Exposition are the crème de la crème of United States commemorative coinage. They are the largest in size, the lowest in mintage, and the rarest, with the highest face-value, only surpassed by rare pieces dating back to the California gold rush and modern commemoratives. At the time of issue, they contained $49.99 worth of gold each, which amounts to 2.68 ounces of gold. Designed by Robert Aitken, they are often excluded from even advanced collections because of their high cost. Those who can afford these pieces, however, will often make them a centerpiece of their collections.

Two different varieties where struck: round and octagonal, sharing the same basic design. On the obverse, within a circle is Minerva, the Roman goddess of wisdom and sponsor of the arts. She is facing left, with IN GOD WE TRUST placed in the field directly above here. In front of her is the upper portion of a shield, inscribed with the roman year, MCMXV (1915, the year of issue). Surrounding this design is UNITED STATES OF AMERICA and the denomination, FIFTY DOLLARS.

The octagonal version was inspired by the fifty dollar gold pieces that were issued by the United States Assay Office in San Francisco in the early 1850s. The unique design, not found elsewhere in American coinage, proved to be relatively popular, despite the high cost of these pieces ($100 each if purchased individually).

Of course, these issues don’t come cheap. The round coin is somewhat higher-priced than the octagonal version, simply because of a lower supply. Even though the majority of the mintage survives in Uncirculated condition, bag-marks and other post-striking imperfections are common, and true gems are very rare. In grades as high as MS-66, the price difference becomes minimal, simply because certified populations of both varieties are so small.

Besides coins that could be purchased on an individual basis, there were also a number of sets available, sometimes accompanied by purple boxes (individual fifty-dollar coins and three-coin sets) and in a purple frame, which are presently highly prized by collectors, even without the coins included.

Complete sets of the half dollar, quarter eagle, and one of the fifty dollar gold pieces were available for $100 each. Sets that contained both of the fifty dollar gold pieces (5 coins total) cost $200 each; this was a huge sum of money at the time, so many collectors skipped the massive gold pieces, buying only the smaller denominations. Three-piece sets of the half dollar, gold dollar, and quarter eagle were available for $7, usually offered in one of the purple cases. Contemporary buyers who only bought the $7 sets would be amazed at the prices they are now bringing in the current market.