The latest issue within the Marine Life Protection series is entitled Rainbow of the Sea and features the shell of the Haliotis tuberculata, or green ormer, a maritime snail species which is mainly found in the Mediterranean but also in the Eastern Atlantic. The coins are issued by Coin Invest Trust on behalf of the Micronesian island state Palau and feature a concave shape, vibrant colors, and a freshwater pearl.

The animal’s scientific name reflects its appearance: Haliotis is derived from the Greek word hali, meaning salt or sea, and otis for ear. Tuberculata refers to the small tubercles on the shell, which reaches a size of up to 15 cm.

The animals can live up to 20 years and usually inhabit a water depth of up to 50 m. In order to resist the current, they hold onto the ground with a muscular foot, the flesh of which is considered a delicacy in many countries. Overharvesting has drastically reduced the population of the green ormer to a point where it is seriously endangered today. 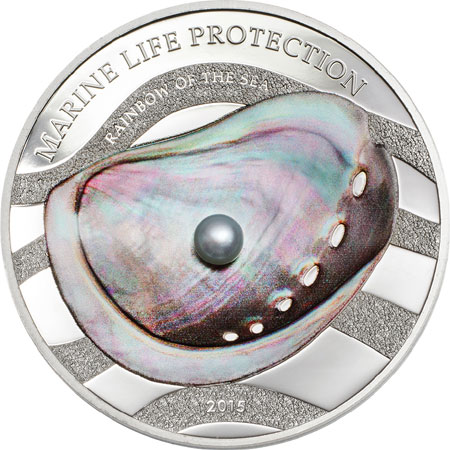 The reverse design depicts the inner surface of the shell of the green ormer with a concave, mother-of-pearl like surface and a real pearl inserted at center. The inscriptions include “MARINE LIFE PROTECTION”, “RAINBOW OF THE SEA”, and the date of issue “2015” at the lower edge. 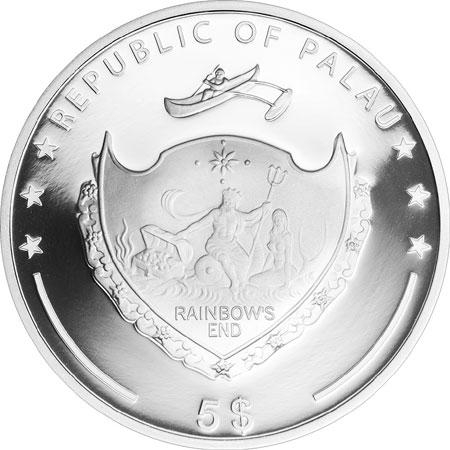 The obverse depicts the coat of arms of the issuing state Palau with a canoeist in an outrigger canoe above. The inscriptions include “REPUBLIC OF PALAU” and the nominal face value “5$”.

Each coin is struck to proof quality in .999 silver with a weight of 1 oz and diameter of 38.61 mm. The mintage is 2,500 pieces. The coins are minted by B.H. Mayer’s Kunstprägeanstalt GmbH and can be purchased through specialty coin dealers.