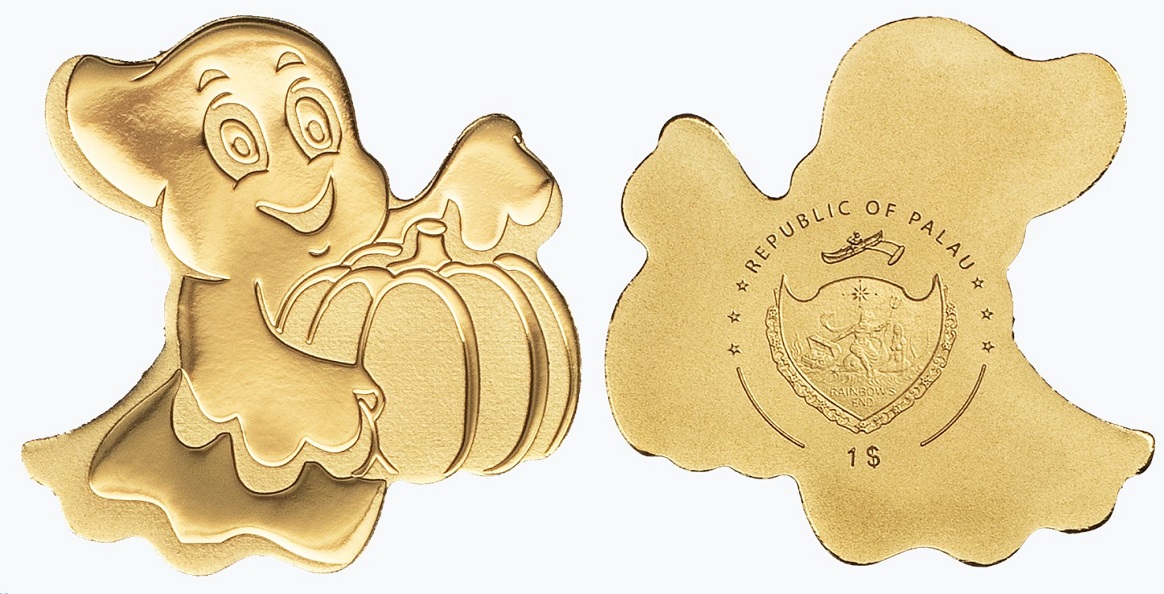 The government and treasury of Palau have released new gold coins which are just in time for the entertaining and eagerly celebrated “All Hallows’ Eve,” more commonly known as Halloween. With its origins predominantly in North America, the tradition actually can be traced to about 1745 and is of Christian origin. The word itself, “Halloween,” (or Hallowe’en) essentially means “Saints’ Evening,” and is derived from a Scottish term for “All Hallows’ Eve” (or the evening before All Hallows’ Day). Over time, All Hallows’ Eve simply evolved into Hallowe’en and has been observed on the 31st October.

Celebrations of Halloween have come into their own, especially in North America, which has a variety of Halloween symbols and traditions. The practise of trick-or-treating has become customary for children who travel house to house in costume asking for treats such as candy or sometimes money, with the question, “Trick or treat?” The word “trick” implies a threat to perform mischief on the homeowners or their property if no treat is given. However, the mischief is usually light-hearted.

For newer Americans originating from Ireland and Scotland, turnips were traditionally carved during Halloween. Arriving in North America, they began to use the native pumpkin, which is both much softer and much larger — making it easier to carve into jack-o’-lanterns.

Of course, the best part of the holiday is the ability to scare your friends and family in some of the most elaborate costumes, or even the simplest, with the most common being a ghost. Over time, ghosts have been portrayed as either frightening or friendly, but for the most part, they remain essential in Halloween symbolism.

The Mayer’s Kunstprägeanstalt Mint produces the new coin at their facilities in Munich, Germany, on behalf of the treasury of Palau. The undated coins are crafted in the shape of a small ghost, which is depicted as a friendly little ghost holding a pumpkin. The reverse side features the national coat of arms of Palau with the inscription REPUBLIC OF PALAU, and below is the denomination 1 $.

The coin is part of a wider special shapes gold coin collection, which is specially commissioned from Coin Invest Trust. The coin is available directly from them by clicking here, along with the 27 other coins in the collection.