The Fall of the Berlin Wall in 1989 was one of the most significant events of the past century. It was the turning point at which the Cold War ended and the reunification of the two German states began. Two men were the driving force behind the developments. German Chancellor Helmut Kohl and General Secretary of the Communist Party of the Soviet Union, Mikhail Gorbachev. A new Palauan coin designed by Coin Invest Trust features brand new 3D laser technology to produce a latent image on the coin surface. From different angles, the coin renders visible the two major protagonists from 1989: Helmut Kohl and Mikhail Gorbachev. 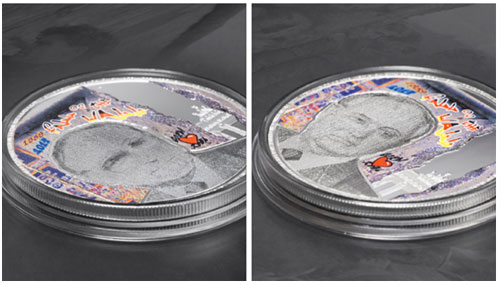 Since 1985, Gorbachev had been reforming the communist Eastern states under the slogan of Glasnost (transparency) and Perestrojka (reorganization). By granting the Eastern Bloc greater autonomy, he signalled the West that he was welcoming change. Helmut Kohl, who was hoping for a reunification like so many other German politicians, was able to turn these signals into concrete concessions for a reunified Germany. Unlike in 1953, the peaceful demonstrations of discontent citizens were not put down violently. Instead, the two statesmen advanced the reunification of FRG and GDR and in this context emerged Kohl’s ten-point agenda, which he presented during a speech to the German Bundestag in 1989.

In 1990, Gorbachev was awarded the Nobel Peace Prize for his active involvement in promoting the reunification. He in turn nominated Helmut Kohl for this distinction in 2007.

The obverse design of the coin features a latent image created with newly developed 3D laser technology. Depending on the viewing angle of the coin, either Helmut Kohl or Mikhail Gorbachev becomes visible. The background carries an image of the Berlin Wall with colored graffiti including “Fall of the Wall”, the dates 1989 and 2014, and the names “Gorbi” and “Kohl.” A gap in the wall opens up to a view of the Branenburg Gate with a micro-circumscription reading: “Berlin’s Wall was torn down during the night of Thursday 9th November 1989, leading to hopeful thoughts throughout the whole world and to a new era of confidence, that everything can change not only in Berlin.”

The reverse of the coin contains the coat of arms of Palau with the official state name “Republic of Palau” and the face value “5$”.

The coins are minted by B.H. Mayer’s Kunstprägeanstalt GmbH and may be purchased through specialty dealers.