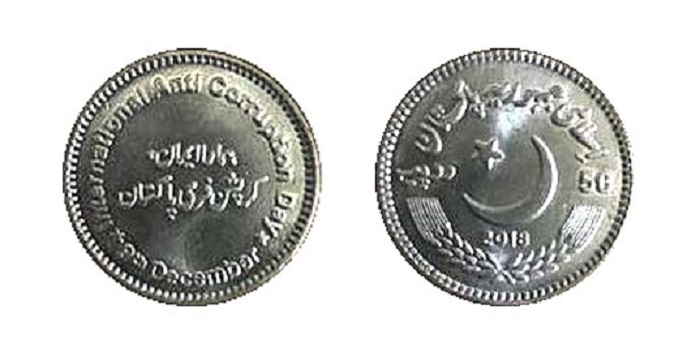 The State Bank of Pakistan issued (9th December) new commemorative coins which are minted in support of and mark International Anti-Corruption Day. On the 31st October 2003, the United Nations General Assembly adopted the United Nations Convention against corruption and also designated the 9th December as International Anti-Corruption Day to raise public awareness for anti-corruption. The convention entered into force in December 2005 and the Pakistani commemorative coin is believed to be the first issued carrying this message.

Corruption is a complex social, political, and economic phenomenon that affects many countries, with some nations placed on the international index that denotes the level of corruption at a higher rate than others. Corruption undermines democratic institutions, slows economic development, and contributes to political instability. In developing countries, the level of corruption is generally greater than it is in developed countries. Region is also a clear factor in the degree of corruption, which can be a substantial cause for concern in economic and political life. Currently, Pakistan ranks 117 out of 180 countries in terms of transparency regarding business and governance, with no change in 2017 from the year previously. This information was published by the Corruptions Perception Index of 2017 and released by Transparency International.

The reverse side of the coin includes the text International Anti-Corruption Day in English along with 9th December at the bottom of the coin and “Hamara Emaan, Corruption Free Pakistan” in Urdu script that is placed in the centre of the coin.

The federal government has authorised the central bank to issue the coin, which has been available at the exchange counters of all field offices of the State Bank of Pakistan Banking Services Corporation since Monday, 10th December.