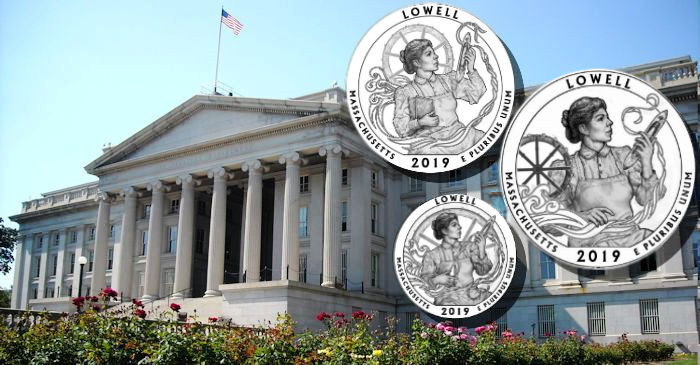 This past Tuesday, September 19, 2017, I enjoyed a leisurely breakfast with fellow Citizens Coinage Advisory Committee (CCAC) members Thomas Uram and Erik Jansen on H Street in downtown Washington, D.C. We were in the nation’s capital for a meeting of the CCAC. The committee’s main agenda item: to review design proposals for five upcoming America the Beautiful quarter dollars and one Congressional Gold Medal. 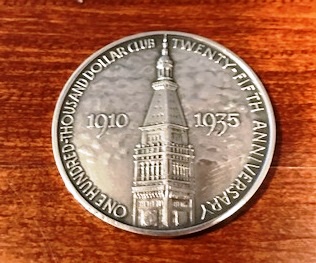 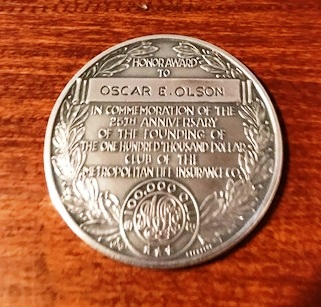 Breakfast was relaxed because we’d started the morning early, well before our 8:30 administrative meeting, giving us time to visit and catch up over eggs, bacon, and steel-cut oats. Tom, a financial adviser by trade, showed us photos of a large silver 1935 Met Life medal that he’s going to research. It was awarded to a life-insurance agent who sold a remarkable $100,000 worth of policies six years into the Great Depression. 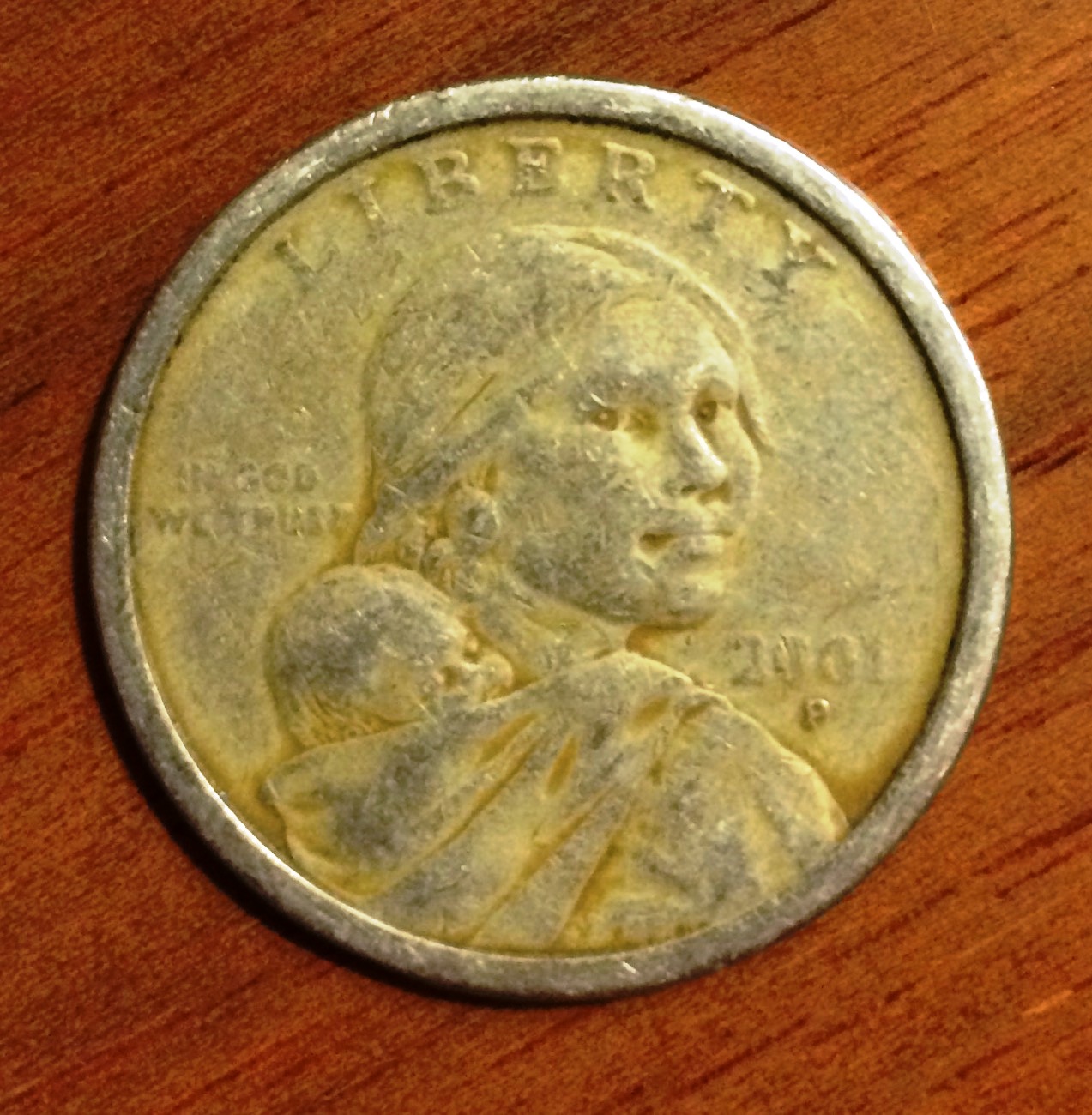 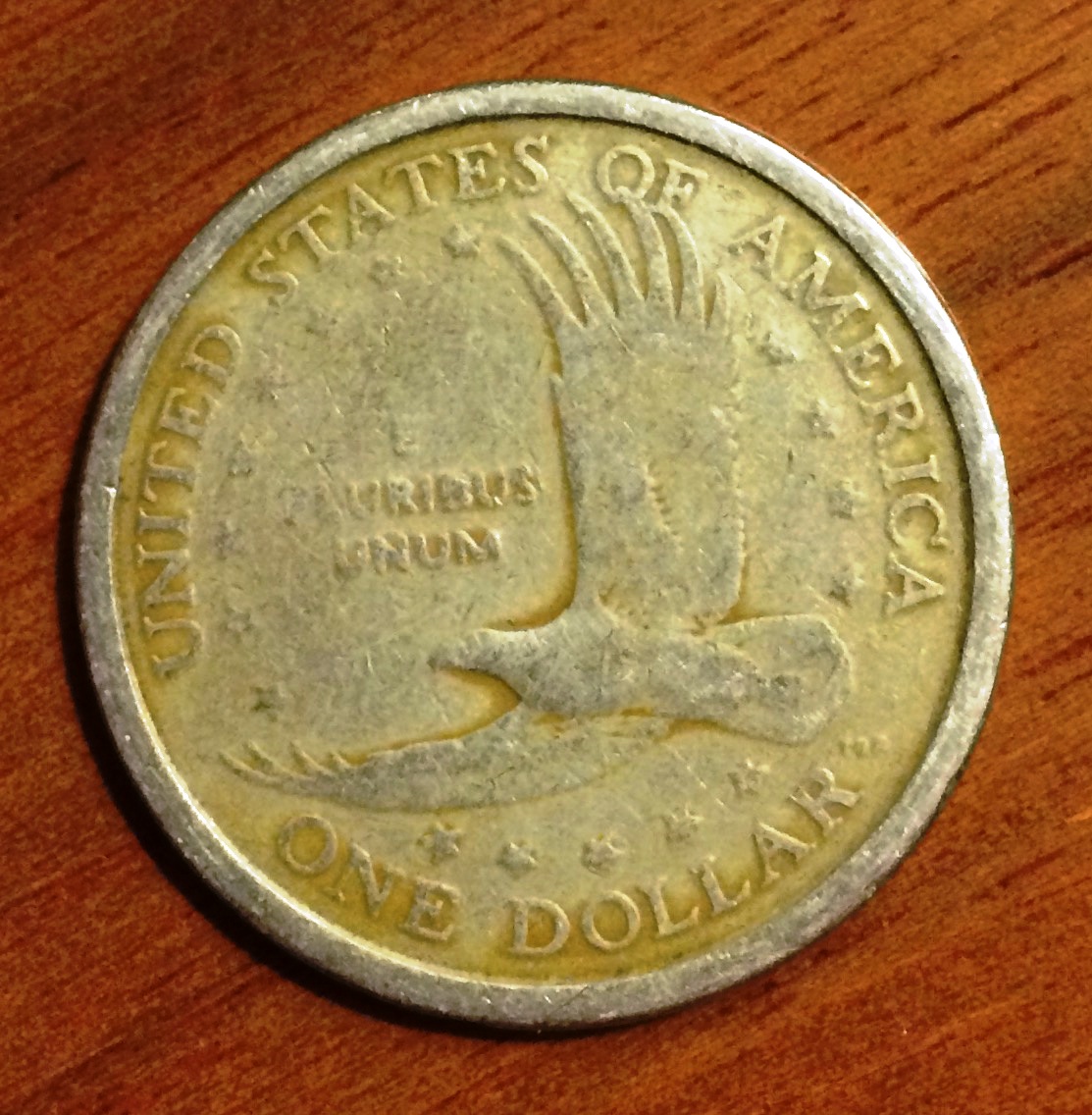 Erik had shown us some “condition rarities” from Ecuador—U.S. Presidential and Sacagawea dollars in very worn circulated grades. These coins are rarely spent as cash in the United States, so here we typically see them in nothing less than lustrous Mint State or About Uncirculated condition. In Ecuador and El Salvador they’re actually used as day-to-day currency, so they get worn down like any other pocket change. I shared with my breakfast companions the story of a small collection of Franco-Prussian War satirical tokens I recently bought. They lampoon the defeated French emperor Napoleon III, showing him wearing a German spiked helmet, or chained with a collar marked SEDAN (the scene of his military defeat and capture). Some of the tokens depict him with a cigarette in his mouth—the emperor was a notorious chain-smoker, said to have been seen nervously puffing tobacco as his armies were routed by the Germans.

After coffee we walked a couple blocks down to United States Mint headquarters on Ninth Street. The entire committee (except for member Kareem Abdul-Jabbar, who had a schedule conflict) assembled with Mint acting deputy director David Motl, Mint counsel, program managers, and others in the eighth-floor board room, for our 8:30 to 9:30 admin meeting. At 10:00 we moved to the second-floor conference room where we were joined by members of the press and public, with Mint medallic sculptors Phebe Hemphill and Joseph Menna on the phone line from Philadelphia, and several National Park Service and other liaisons present as well.

After some introductory business, we jumped right into our review of the America the Beautiful coin design proposals for 2019. The sketches were made by Mint artists (and Artistic Infusion Program artists) based on earlier guidance from the CCAC, the U.S. Commission of Fine Arts, and liaisons from the national parks and other sites involved.

The first portfolio we reviewed was for Lowell National Historical Park in Massachusetts.

This site was established as a national park in 1978 to protect local history and interpret Lowell’s important role in U.S. industry. In the 1820s and 1830s the recently incorporated mill town grew into the cradle of the American Industrial Revolution. Its waterways and canal systems provided the power to run textile mills—innovative “integrated” factories that housed their entire operations under one roof, instead of spread out in several buildings or locations. New machinery was developed. Cloth manufacturing was revolutionized at Lowell, moving away from its cottage-industry origins into a new world of mass production. Providing the manpower—or womanpower—to run the machines were the so-called Mill Girls, most of them from the nearby farms of New England, recruited to Lowell to work in the factories. They stayed in company-owned boarding houses, with supervised educational and cultural opportunities and organized living. The Mill Girls became a social force in America, encouraging labor reform and education for workers.

Interpretive Park Ranger David Byers, who joined us in person at the meeting, discussed three important components for the coin design: It should include the human element, telling the story of the Mill Girls; it should capture the idea of technological innovation; and it should feature the “built environment” of the mills. The National Historical Park’s preferred design was MA-04. 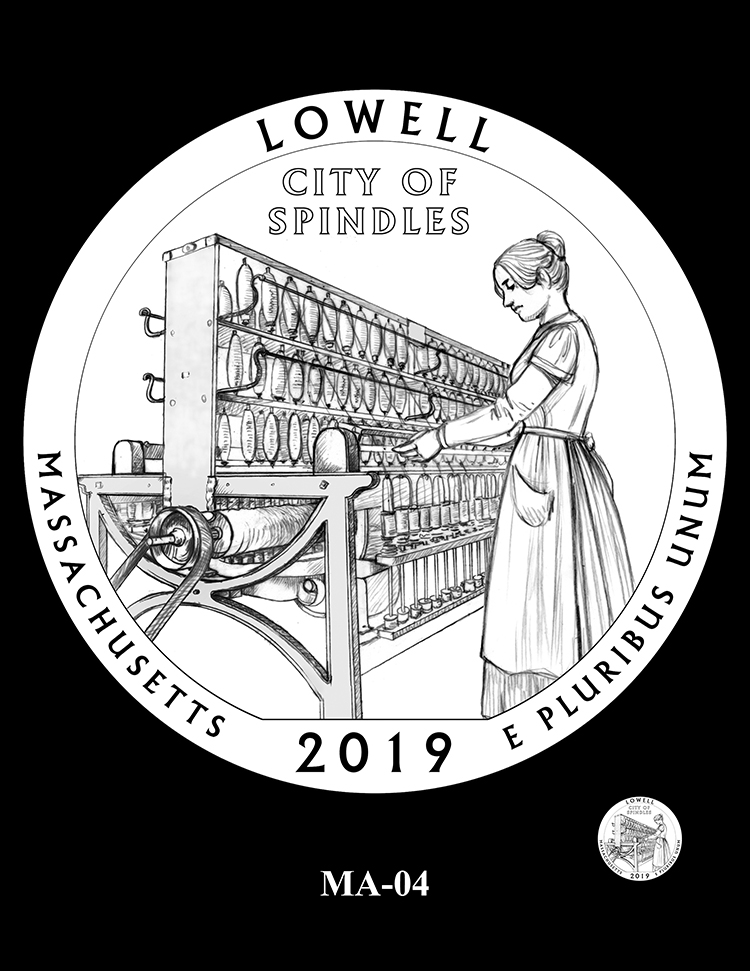 In my own review of the Lowell portfolio, which included 18 sketches, I discounted those designs that don’t feature the Mill Girls, because their specialized labor was such an important transition from the artisanal hand-work of the past to the full automation of today. That took MA-02, 03, 05, and 06 off the table. They each have their strengths and weaknesses; these are the notes I made as I studied them: 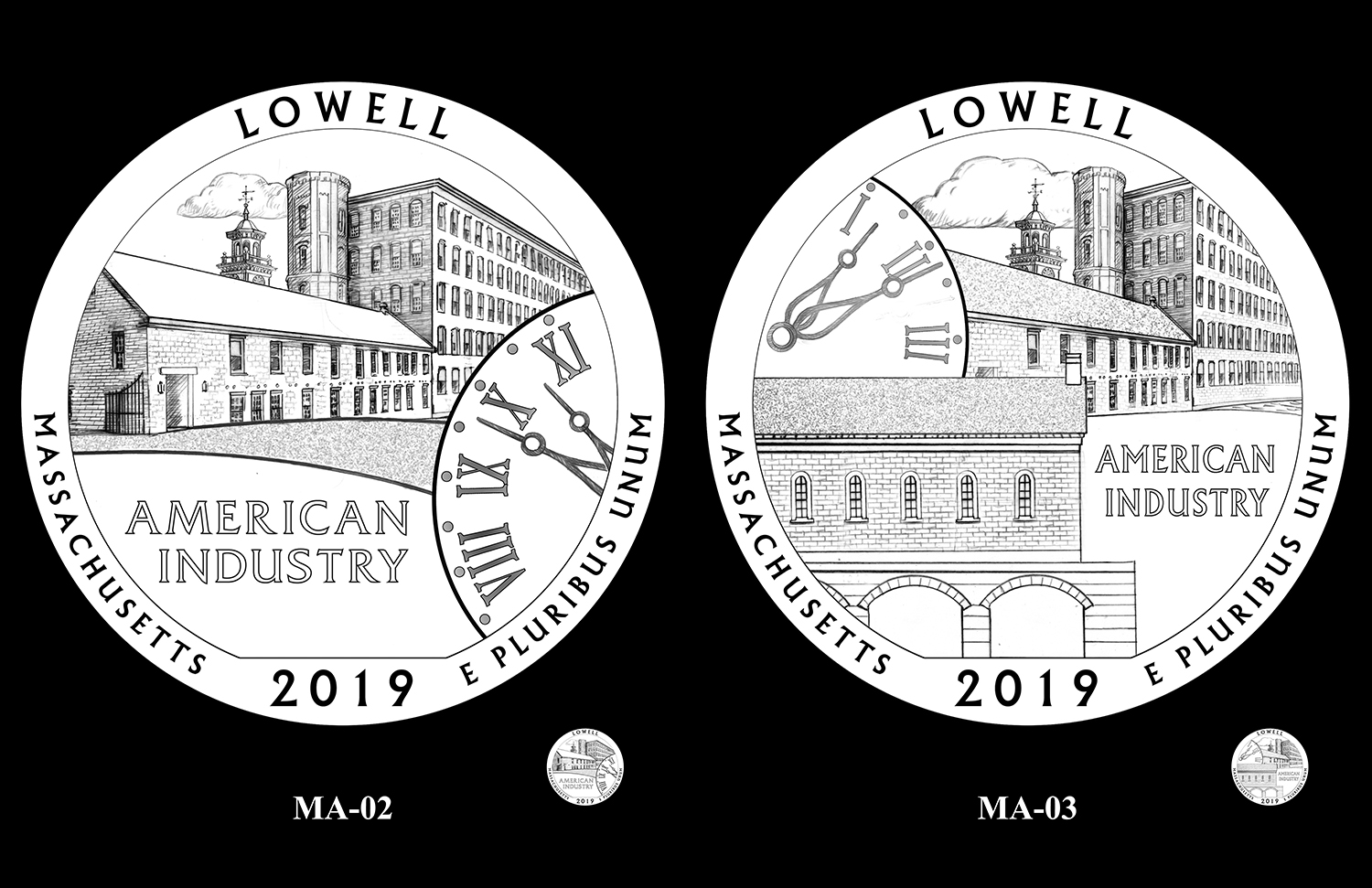 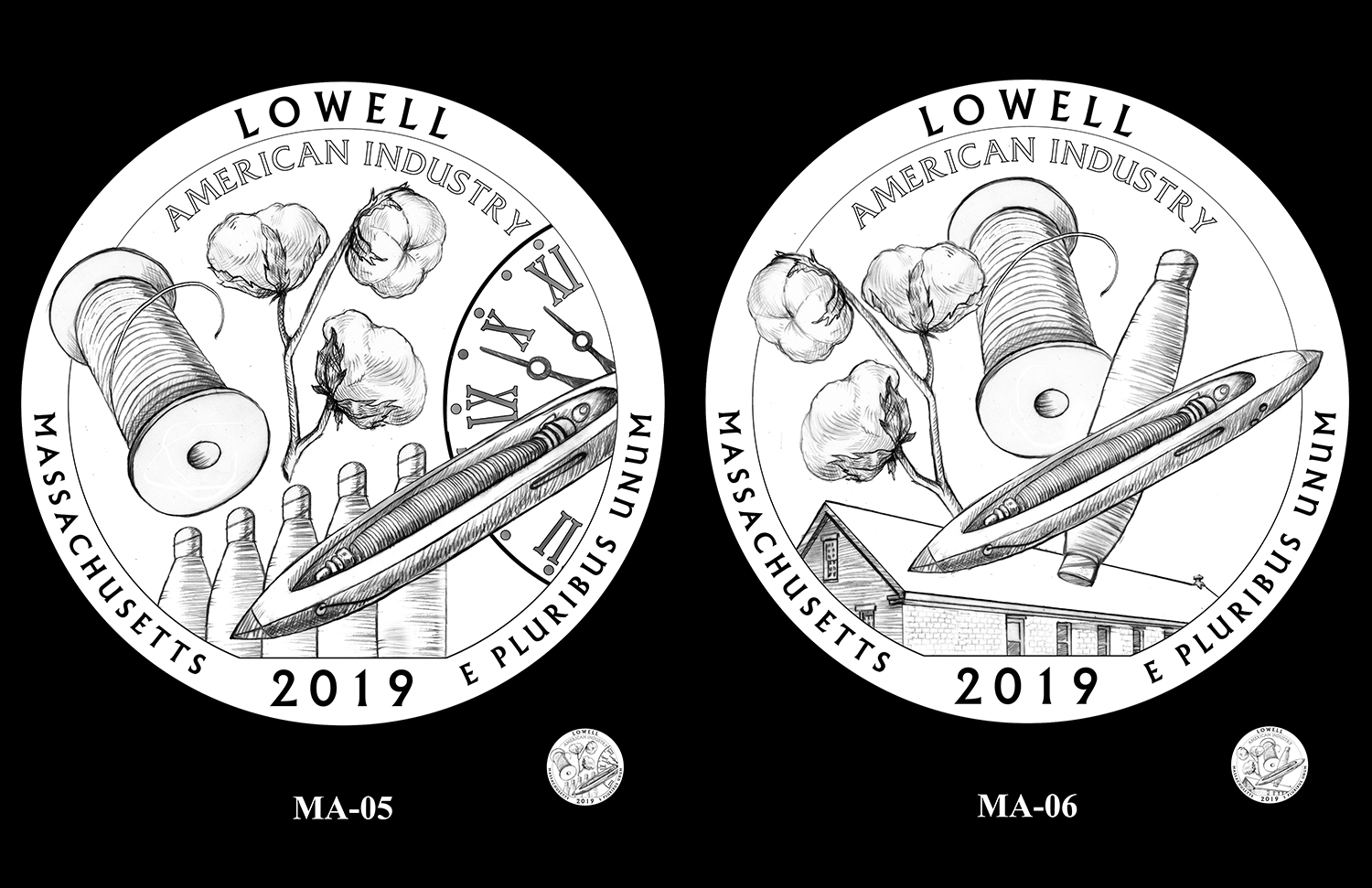 Among those designs that do feature the Mill Girls, I preferred those that give an expansive view of their work in the mills, showing more of the textile machinery (rather than focusing on individual elements such as shuttles and bobbins).

MA-01 and 01A feature a Mill Girl, and also textile machinery, but to my eye her stance is too posed and static. She appears to be displaying the loom, rather than working at it. The design looks like an old-fashioned museum diorama and not a living, breathing activity. There has been a lot of CCAC discussion recently about avoiding “pictures on coins” and moving toward more symbolism in American coinage art. 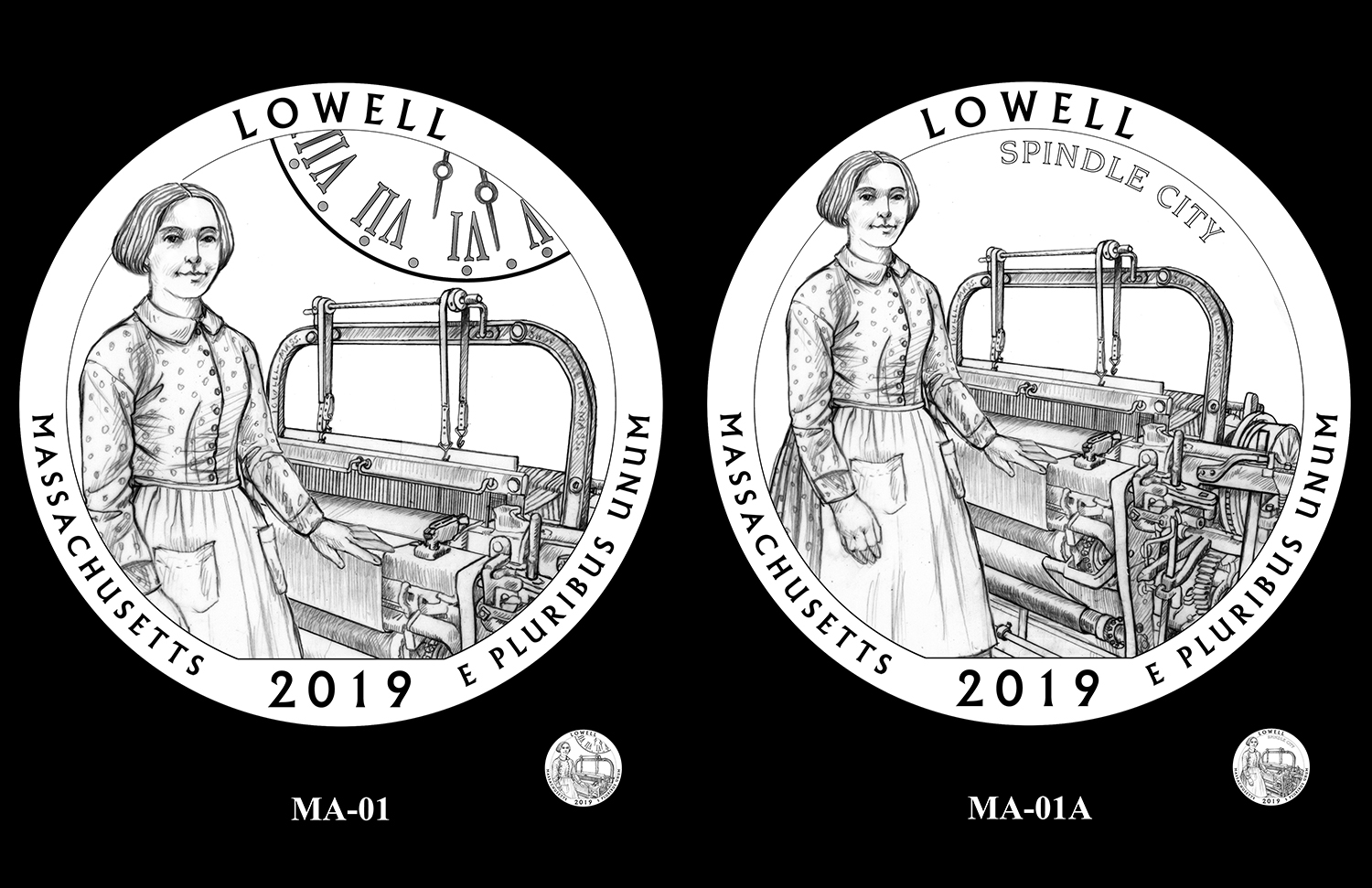 Design MA-04 has a storytelling combination of machinery and humanity. It’s also one of only two designs that include a text reference to spindles, which adds another layer of understanding for 21st-century viewers looking at 19th-century technology. My only concern was that the spinning machine might be too finely detailed for a quarter-sized coin. On the silver three-inch coin the design would enjoy greater depth and more visible detail, but the circulating quarter offers less than a one-inch canvas.

MA-07 and MA-08 use the same Mill Girl figure—07 as the coin’s main motif, and 08 as part of a bigger scene. The figure of the woman handling a bobbin and shuttle is well drafted, but without a legend to accompany it (as with AMERICAN INDUSTRY in some of the other designs), it would be ambiguous and mysterious to a 21st-century viewer. Modern Americans won’t recognize the threaded bobbin or the shuttle, especially reduced in size to fit on the quarter dollar. On a one-inch canvas, it would look like the Mill Girl is shucking an ear of corn. Design MA-08, however, is an improvement with its combination of the human and machine aspects of Lowell’s textile industries. The loom gives context. Also, the Mill Girl isn’t just pressing levers, but she’s interacting with the machinery in a very intimate, literally “hands on” way. This is a good depiction of the transition from artisanal cottage-industry work to mass production. The machinery might be finely detailed, but we’ve seen fine detail work in some recent America the Beautiful quarters, for example, the 2017 Frederick Douglass and Ellis Island coins. It would be up to the Mint’s engraver to make MA-08 work, but I think it could be done. MA-08 was my #1 preference from the Lowell portfolio of designs. 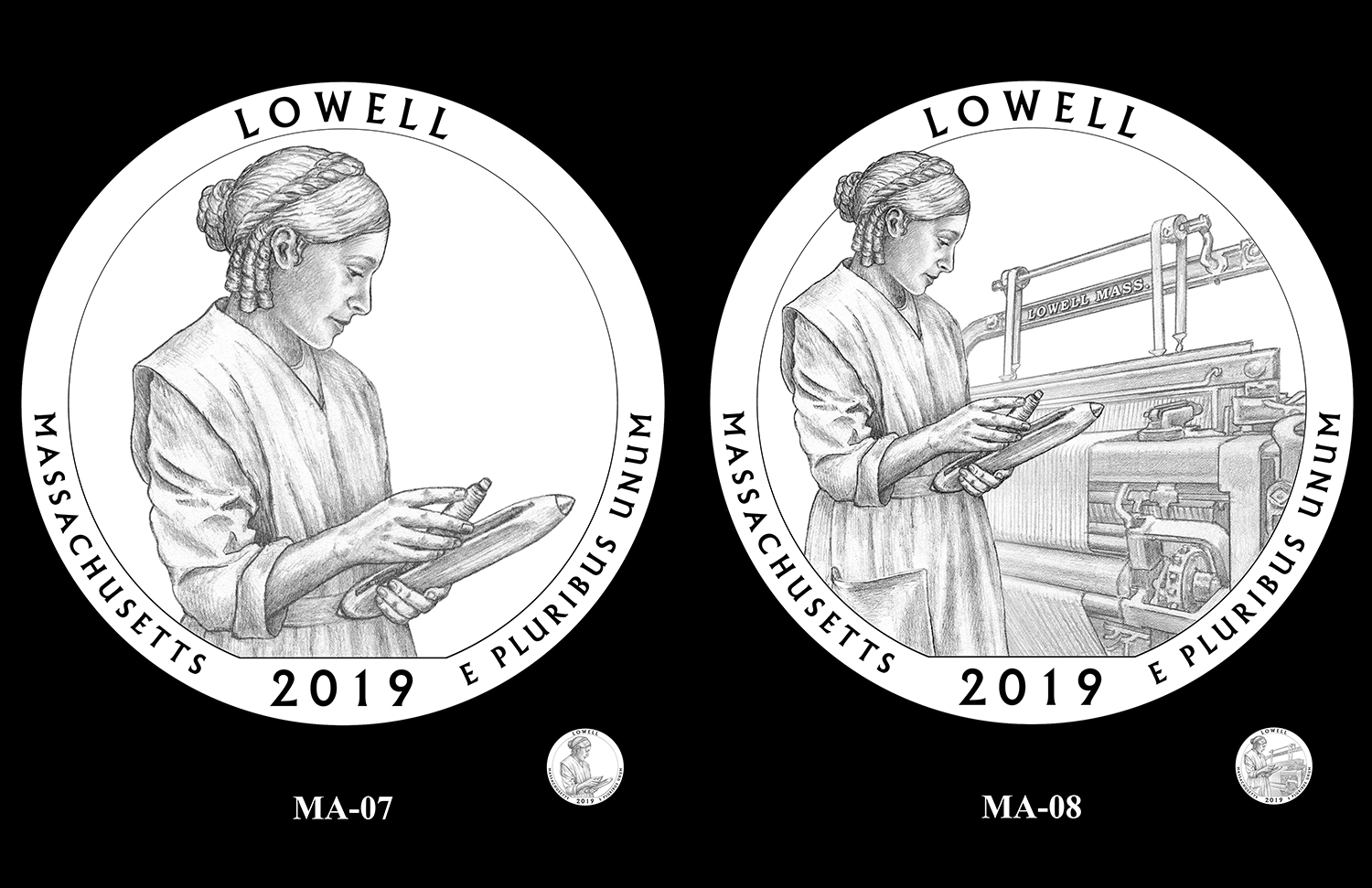 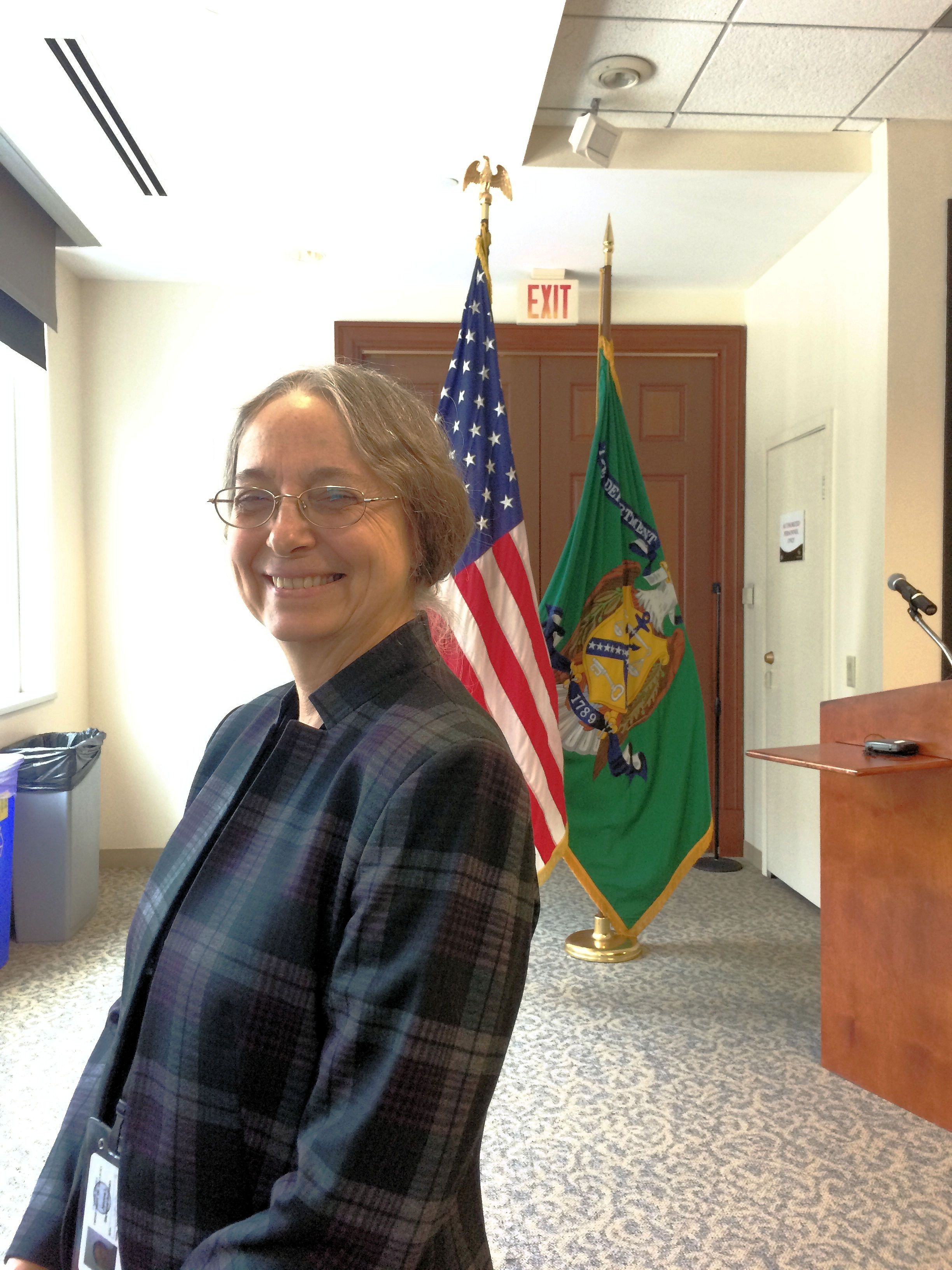 CCAC member Jeanne Stevens-Sollman, from Pennsylvania, a leader in the field of medallic sculpture with work exhibited throughout the United States and in the collections of museums here and in Europe, as well as in numerous private collections.

Committee member Jeanne Stevens-Sollman (representative of the general public, and herself an accomplished sculptor) noted the importance of showing Lowell’s architecture, and called out designs MA-16 and 17A. Member Dr. Herman Viola (specially qualified in American history) supported our liaison’s preferences and brought attention to the quote in MA-14: “Art is the handmaid of human good.”

Conversation quickly centered around MA-10, 11, and 12. These designs (three variations of the same motif) show a Mill Girl with thread stylized as if it were being spun from water, symbolic of the importance of Lowell’s canal system in powering its textile mills. These eye-catching designs ultimately were the ones that won the committee’s recommendation. Personally, I appreciate the artistry of the water being turned into thread, and I like the intervening force of the Mill Girl in that transformation (she’s literally the central figure in the designs), but to me this is too stylized of a depiction of the textile production process. It captures the importance of the waterworks, but reduces the loom machinery to a single element (the bobbin and shuttle). I feel that reduction goes too far. Committee member Robert Hoge, our member specially qualified as a numismatic curator, agreed, saying that “the water and thread doesn’t work” and critiquing the halo or nimbus effect of the water-wheel in MA-12.

Other committee members, however, were quite taken with the artful nature and symbolism of MA-10, 11, and 12. Mike Moran, a numismatic researcher and published author, said he was drawn to them as a civil engineer who appreciates that “water power drove these mills.” He did rhetorically ask, though, if they would resonate with the man on the street.

Heidi Wastweet, our member specially qualified in sculpture and medallic arts, called this suite of three designs “what we’ve been asking for” in the CCAC’s recent push for more symbolism and less literalism. She called them “beautiful, symbolic, but representational.” In contrast, she addressed design MA-04 as one that is “adequate, informative, very literal, utilitarian,” and asked, “Is that the bar we want to set?”

Member Thomas Uram also spoke about MA-10 and 11 as being among his preferences, noting that they would “really let you see more than just a machine.”

Member Erik Jansen noted that “the face imparts emotion on a coin,” and for that reason MA-17 and 17A can be discounted, since the Mill Girls’ faces are turned from the viewer. MA-10, 11, and 12 don’t have that problem.

Member and former committee chair Mary N. Lannin, an expert in ancient coinage, was emphatic: “My heart is with number 11.” She praised the way MA-11 actually shows the water turning the mill wheel, and spoke about the stance of the Mill Girl: “She’s proud. This is her work.”

Acting Chair Donald Scarinci, a specialist in art medals, called MA-11 “clearly the nicest.” “It gives us everything we’ve been asking for” in terms of a movement toward artistic symbolism on American coinage. “The artists are listening to us.” He pointed out that the design has all three elements desired by our liaisons at Lowell National Historical Park. It focuses on the individual Mill Girl, it makes use of negative space, and it has a hint of abstraction in the thread depicted as water. It shows motion rather than photography, Scarinci said. 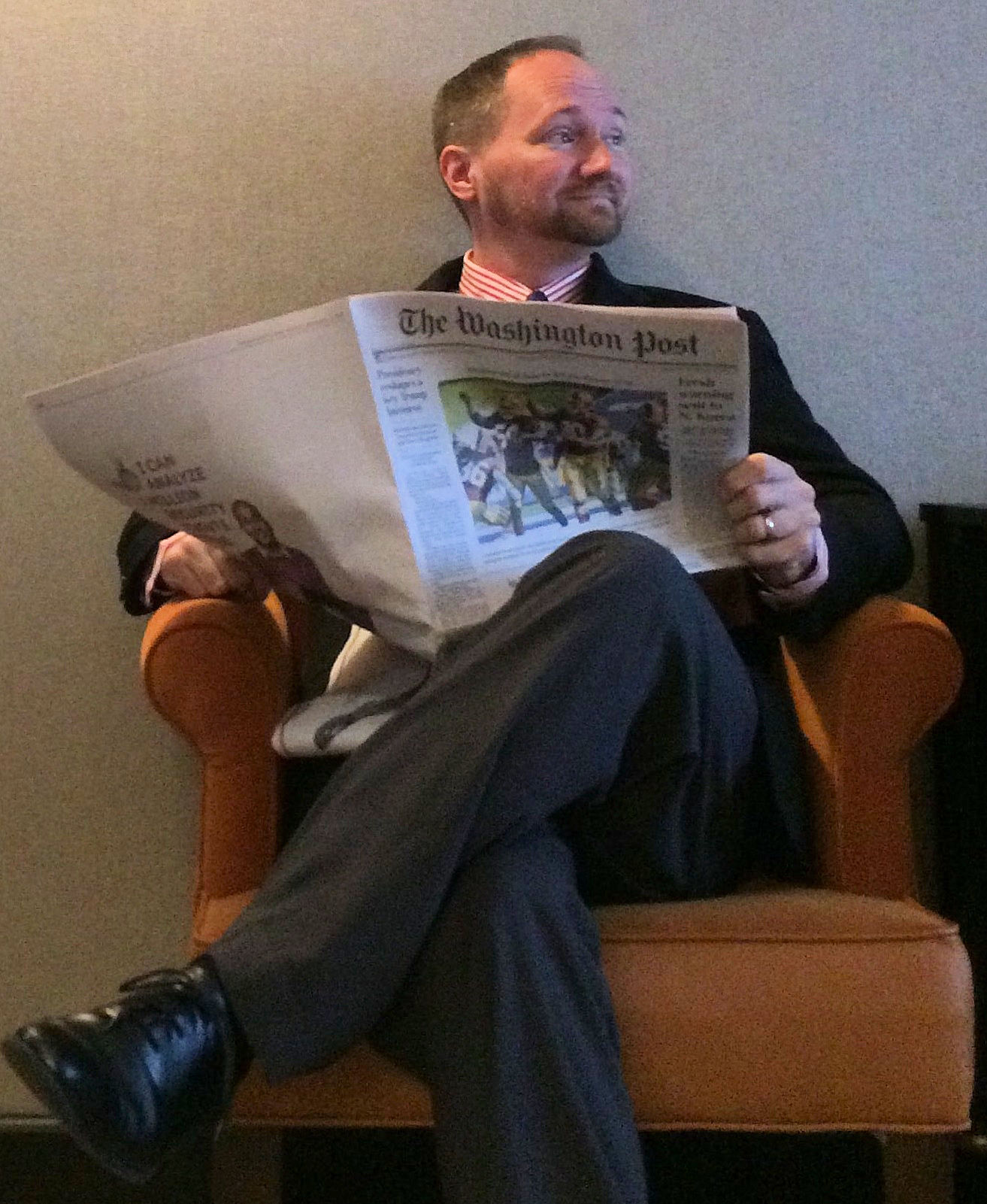 Our Vote for Lowell, and Our Recommendation to the Treasury

The mission of the CCAC is to study and review coinage design proposals and make our recommendations to the Secretary of the U.S. Treasury, who ultimately decides what designs will be used. In our first round of voting for the Lowell sketches, each candidate could earn up to 30 points—10 members of the committee were present, and each member could assign 1, 2, or 3 points to each design. Our voting was thus:

Since our most points were voted in a block, to MA-10, 11, and 12 as a general motif, we voted in a second round among the three. In the second vote: 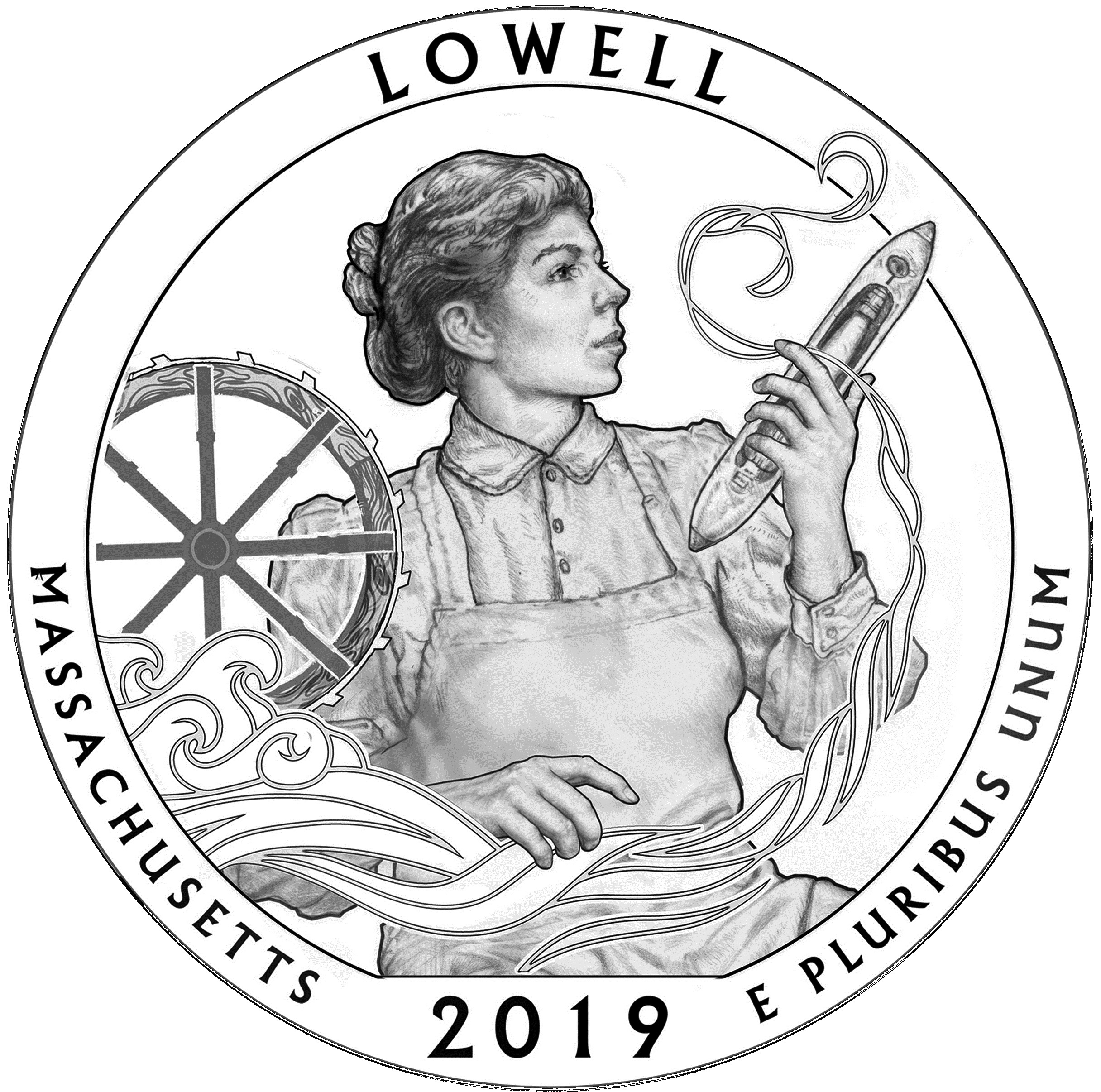 This voting is not a final act itself, but a springboard for further conversation as we circle in on “final.” A bit more discussion led to a closer study of the wheel buckets shown in MA-11’s machinery, at the left of the design. Our recommendation to the Secretary of the Treasury: adoption of MA-11, with the wheel buckets modified, as the reverse of the 2019 Lowell National Historical Park quarter.

Mr. Byers from Lowell agreed with our recommendation, appreciatively noting that MA-11 interprets the textile story from left to right, starting with the force of moving water, then the Mill Girl holding machine parts, and finally to woven thread.