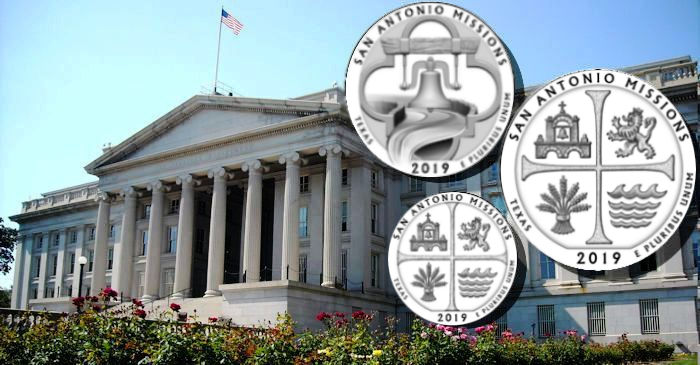 Another souvenir I bought during my September visit to United States Mint headquarters in Washington was an Uncirculated five-ounce version of the Ellis Island America the Beautiful quarter. The Philadelphia Mint strikes these large (three-inch–diameter) coins in 99.9% pure silver. Regular bullion versions are sold through the Mint’s network of Authorized Purchasers, while numismatic versions are sold directly by the Mint to collectors. The latter are specially made with an Uncirculated (also called Burnished) finish, encapsulated, and packaged in a sleeved box with a certificate of authenticity. The Ellis Island coin “depicts an immigrant family approaching Ellis Island with a mixture of hope and uncertainty. The hospital building can be seen in the background.” This is a design with important significance to many American families whose ancestors traveled to a new life through Ellis Island. It was composed by Artistic Infusion Program designer Barbara Fox and sculpted by U.S. Mint sculptor-engraver Phebe Hemphill.

The reason I was in Washington in September was to attend the Citizens Coinage Advisory Committee’s review of upcoming coin and medal proposals, including those of the America the Beautiful quarter program. The designs we review in 2017 will be the coins we spend and collect in 2019 and beyond—assuming the secretary of the Treasury accepts our recommendations. He has the final say on all coin designs.

The fourth in our slate of 2019 design reviews was a portfolio of sketches for San Antonio Missions National Historical Park in Texas. This park is a network of four Catholic missions (not including the famous Alamo). It was established to educate people about Spain’s successful effort to extend its territories north from Mexico in the 1600s and 1700s. This was before the “United States” existed as a nation when North America was made up of British and other colonies, unclaimed wilderness, and contested lands. 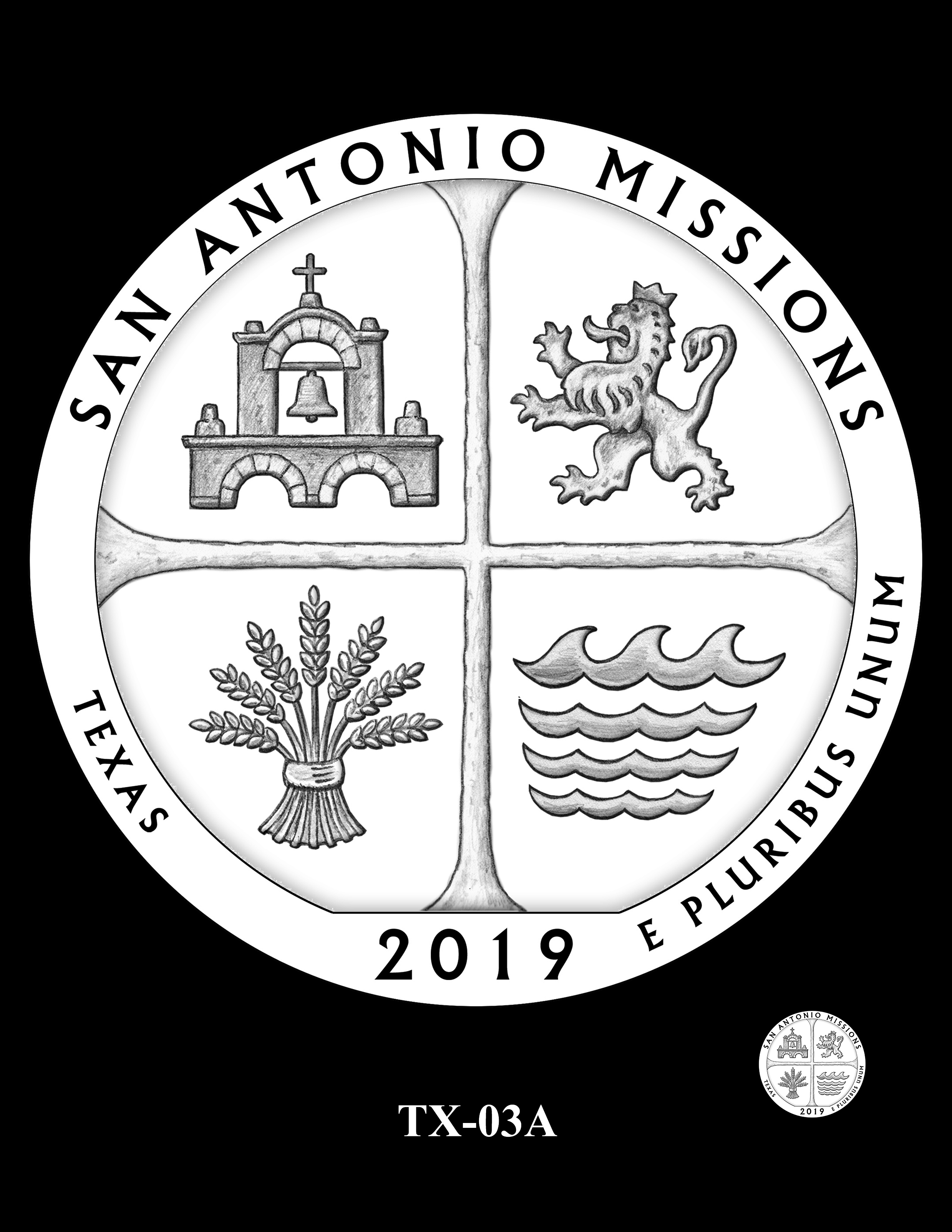 We were joined by phone in our discussion by Lauren Gurniewicz, the missions’ chief of interpretation. She told us the National Park Service’s choice from the selection of 15 designs was TX-03A, calling it “fantastic” and saying “it represents what we’re about.”

CCAC members don’t arrive in Washington with a blank slate for these America the Beautiful coin-design reviews. Several months before our meeting we discuss the national parks and other sites that will be under consideration. We talk with National Park Service liaisons who have already worked with U.S. Mint staff to flesh out their thoughts and ideas and identify important potential themes. These liaisons typically are high-level NPS managers and historians; for example, chiefs of interpretation, such as Ms. Gurniewicz. (The chief of interpretation, as defined by the Service, is “a senior leader in the NPS and has a major impact on the organizational effectiveness of the park in meeting mission goals for stewardship, relevance, education, and workforce. The Chief serves on the park management team, works collaboratively with park partners, and is the critical organizational link between tactical action in the field and strategic park planning.”) CCAC members give our guidance to the Mint’s artists on what we recommend, design-wise, for each coin. Then, several months later, the Mint mails each CCAC member a package of design portfolios—usually 10 to 20 proposals, by several artists, for each coin. We get these packages a few weeks before our scheduled design-review meeting, which allows us time to study and critique each proposal, weighing its artistry, its appropriateness for the subject, its coinability, and other factors. Then we convene to discuss the designs in the committee’s public forum. 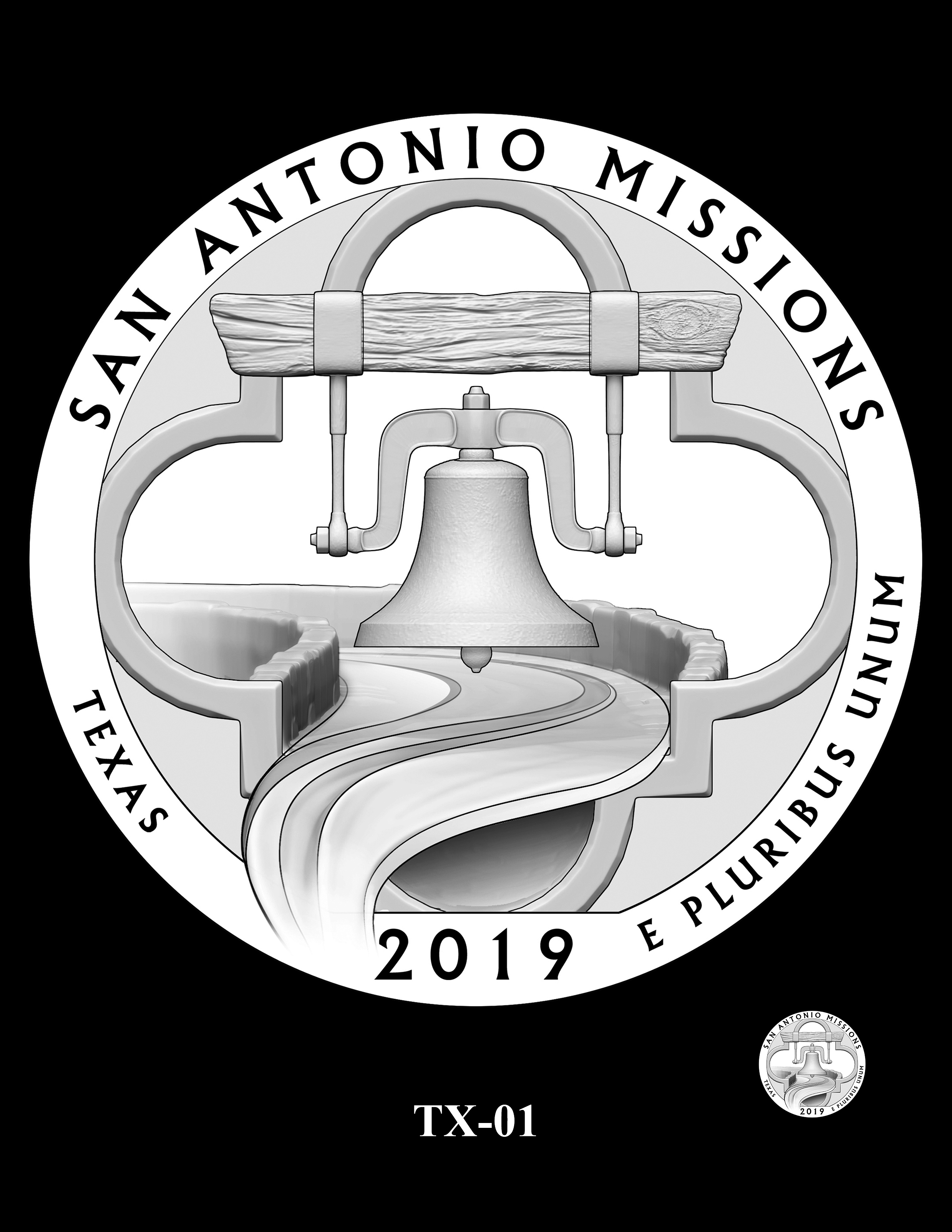 To my eye, the portfolio for San Antonio Missions National Historical Park started off strong with TX-01. This design incorporates architecture from the missions, symbolizing their civilizing aspect (in the Western European mode), along with flowing water. The quatrefoil subtly represents the Christian cross, and it also has ancient Mexican significance, having been incorporated in water rituals, symbolizing rain and fertility.

Meanwhile, the architectural designs, TX-04 through 11A, are all beautifully drafted.

The true standouts in this portfolio, though, are the trio of TX-03, 03A, and 03B. These are the symbolically strongest and most numismatically significant designs of the Texas group. They hark back to the Spanish-American coinage of reales dating from the founding era of the San Antonio missions. The quadrants illustrate symbols of wheat (farming and cultivation of the mission lands); arches and a bell tower (fortress, community, and home); a heraldic lion (Spain); and water (the San Antonio River and its life-sustaining resources). I was drawn to these designs because of their artistic connection to Spain’s colonial coins. TX-03A and 03B, in particular, stood out for me, since they show the church tower and the lion in the top quadrants. These represent the most significant and pervasive elements of life in the missions. The native Americans who sought shelter there (from Apache raiders, from disease, and from drought) were compelled to embrace, in the words of the National Park Service, “a new god and a new king.” They had to convert to Christianity and swear loyalty to the Spanish monarch.

CCAC member Tom Uram praised the artists who worked on this portfolio, commending them for well-thought-out designs. He mentioned that he’s a member of the 1715 Fleet Society (a group that promotes public awareness and scholarly study of all facets of the hurricane destruction of Spain’s 1715 treasure fleet off Florida’s coast). As such, he couldn’t help but be attracted to the coin-inspired designs, and he called out TX-03B, with the cross free-floating, as his favorite. 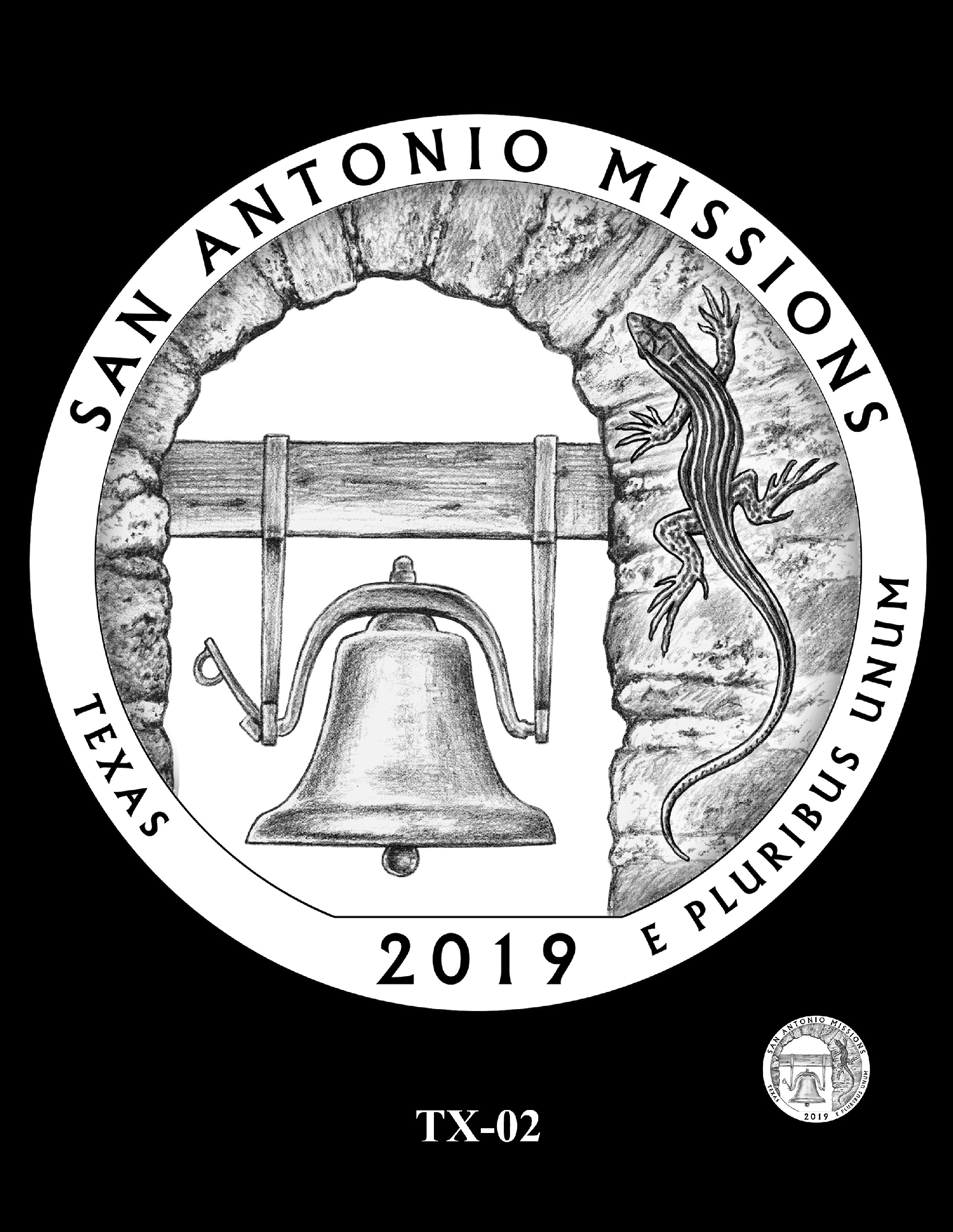 Member Heidi Wastweet, too, gave thanks to the Mint’s artists, calling this portfolio “a fantastic packet.” The well-known sculptor said TX-01 is “very good,” and she appreciated the addition of wildlife in TX-02. 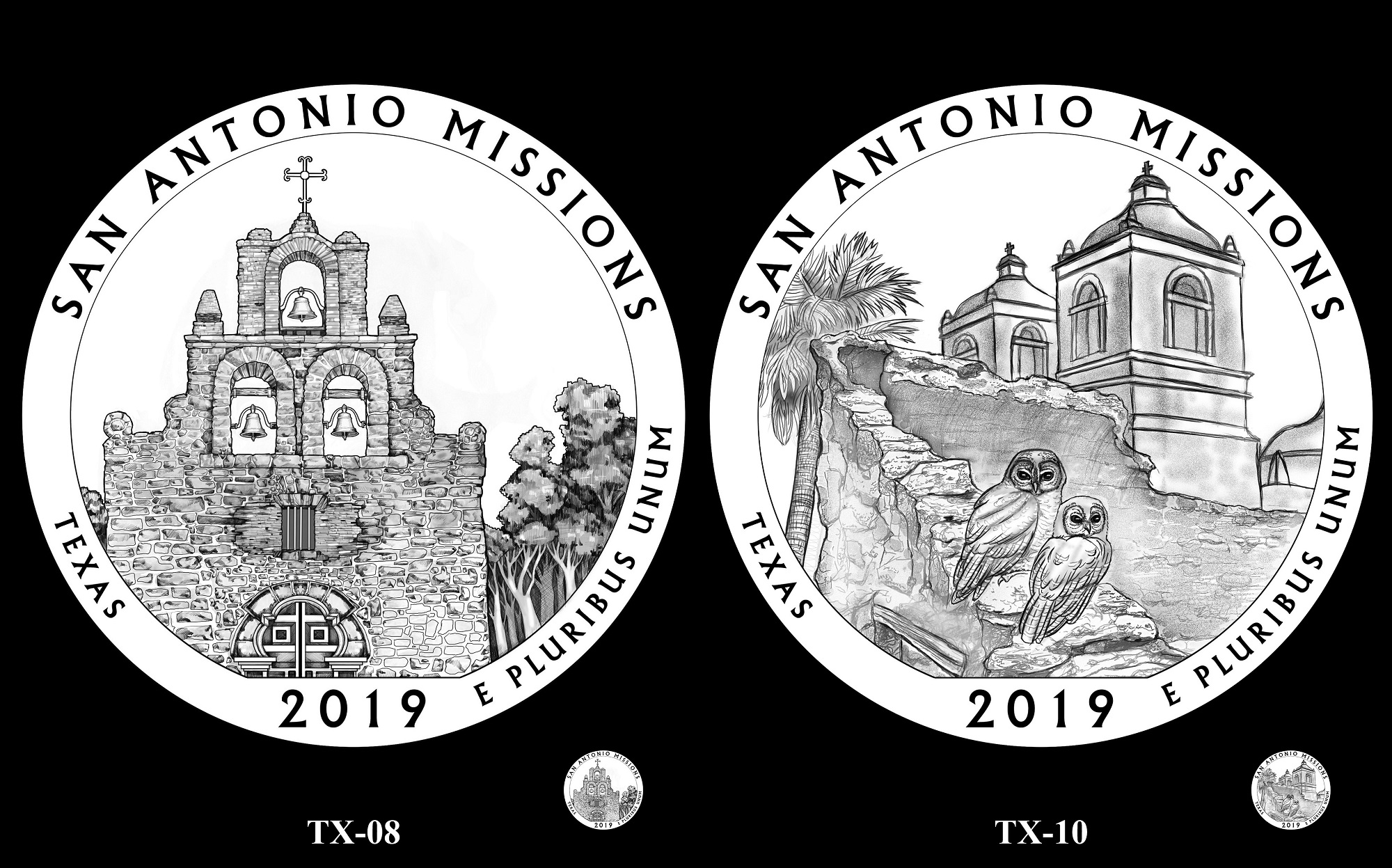 “The stylization of the trees is remarkable” in TX-08, she noted, and TX-10 would be good for a medal. Her preferred design from the portfolio of 15 was TX-03B.

Member Erik Jansen, a longtime numismatist, concurred, noting TX-03 and 03B as his favorites. 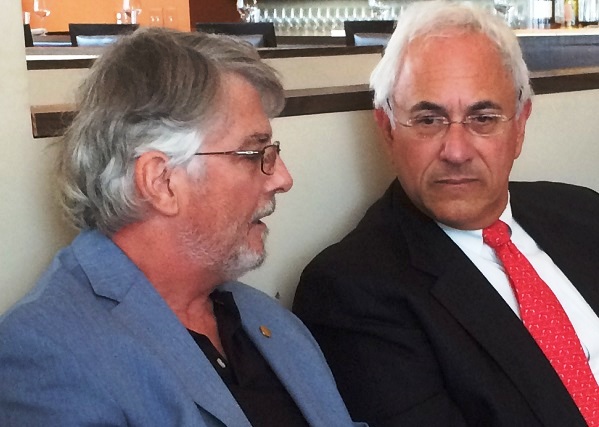 Member Mike Moran, author of Striking Change and 1849, two books that study the history of gold in United States coinage, observed that “Before 1857, Mexican and Spanish coins were what everyday Americans used in change.” They were legal tender in the United States until shortly before the Civil War. Moran identified TX-03B as his preferred design.

Member Herman Viola, an expert in Native American history, called TX-01 “a great work of art,” while giving his approval “wholeheartedly” to TX-03B.

Member Jeanne Stevens-Sollman—like Heidi Wastweet, an artist and medallic sculptor—called TX-01 “powerful” and said it would make a great coin. Her strongest support went to TX-03B, which she described as “wonderful.” 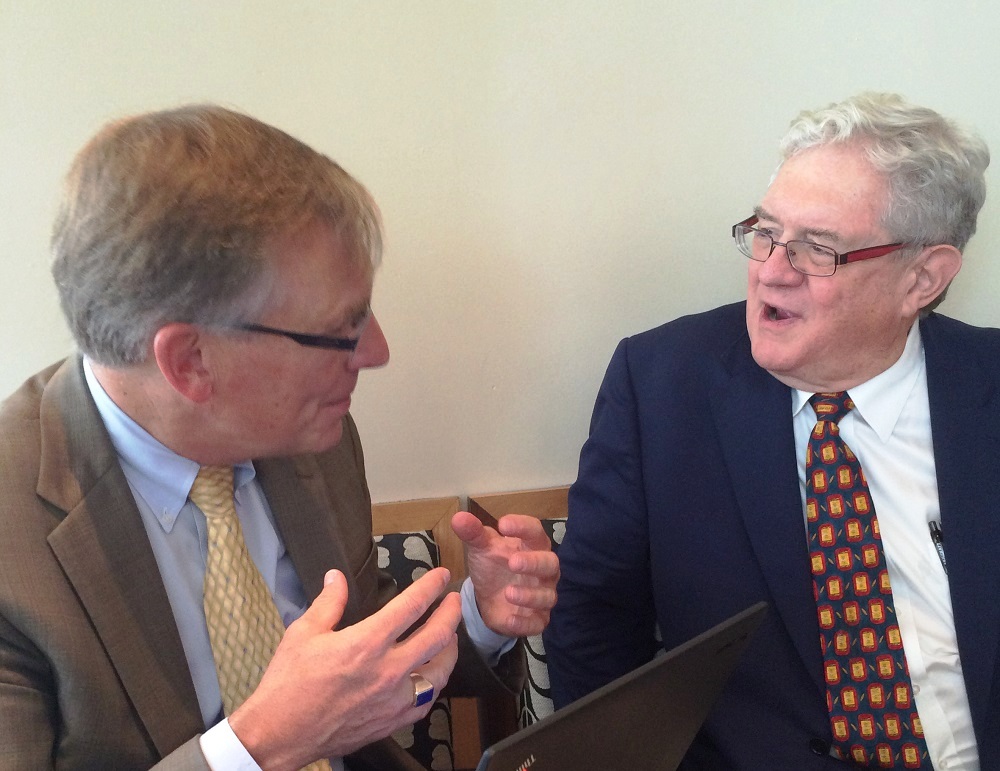 CCAC members Erik Jansen and Robert Hoge, September 2016. Jansen is CEO of a medical-device firm he co-founded in Washington State. He brings his knowledge of engineering to technical questions of U.S. coinage. Like Hoge and many other members of the committee, he is a longtime coin collector.

Member Robert Hoge also was enthusiastic about the portfolio: “We can’t go wrong with this group.” He pointed out that the quatrefoil, an element of design TX-01, also appears in gold Spanish-American coins. He gave his preference to TX-03B while noting that the symbology is not fully Spanish—”the lion is León, but nothing represents Castile.” Hoge’s understanding of Spanish and Spanish-American coins comes from long study and experience. He is the former curator of North American coins and currency for the American Numismatic Society, and his wife is art historian and University of Barcelona professor Immaculada Socias i Batet.

At the time of our September meeting, Mary Lannin’s nomination for continuing in the CCAC’s chairmanship was under consideration by the Treasury Department, so member Donald Scarinci, the committee’s senior member in years of service, acted as chair for this meeting. As did other members, he praised the Texas portfolio. “The artists listened and they heard us,” he said, noting that the only reason TX-01 doesn’t win is because the 03 grouping is so strong. Otherwise, he said, 01 is “what we’re looking for.” 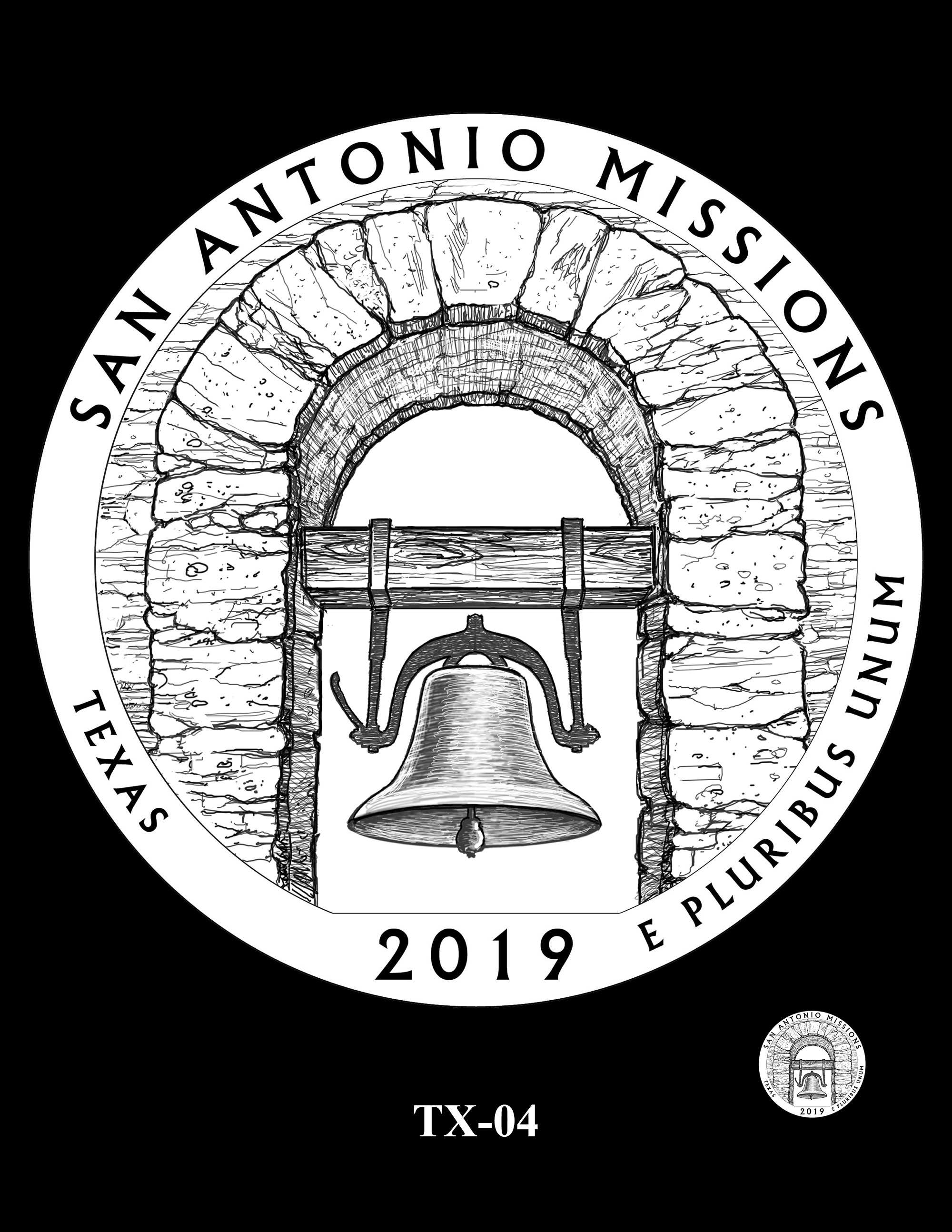 04, he said, “uses the coin in a really nice way to show the architectural importance” of the missions. 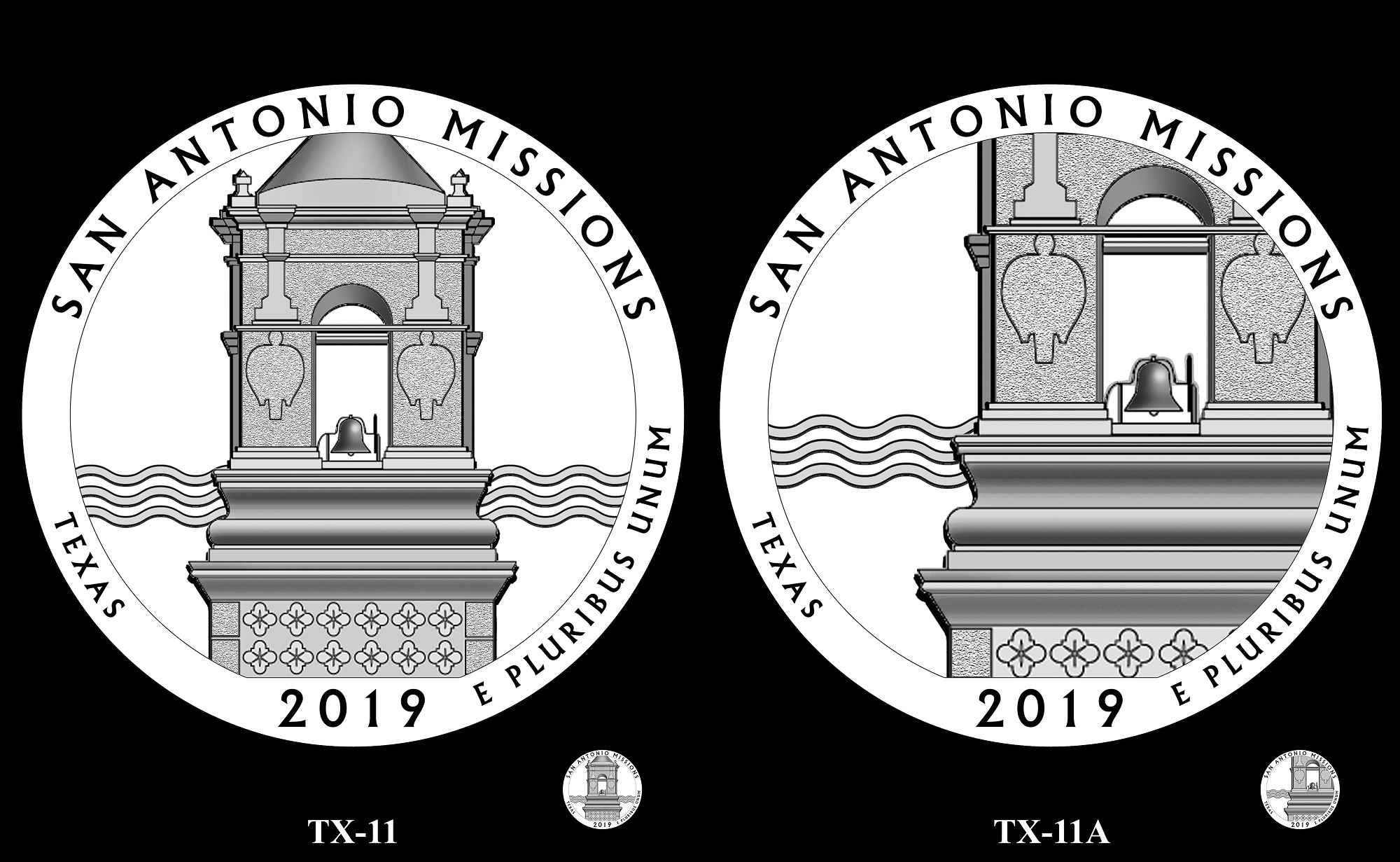 He gave encouragement to the artist who created TX-11 and 11A, calling them good designs. Ultimately his strongest support went to 03B, which he praised for its sense of history combined with symbolism important to Spanish Mexico.

Mary Lannin was the final committee member to remark on the San Antonio designs. She, too, voted for 03B in particular, noting the importance of showing the cross in its entirety, rather than extended to the interior perimeter. Lannin, a retired television producer and winery owner who now edits and volunteers for numismatic groups, said, “It’s wonderful to have the luxury of choosing from such a great group” of designs.

Our Vote for San Antonio Missions National Historical Park, and Our Recommendation to the Treasury

The Citizens Coinage Advisory Committee was set up by Congress as a public body qualified to advise the secretary of the Treasury on themes and designs for circulating coins, bullion, and medals. Each of our 11 members is either specially qualified in a particular field, recommended by a member of Congress, or chosen to represent the general public.

Part of our process of making recommendations is to take a vote after we discuss and analyze each coin’s design proposals. The vote results lead to final discussion, which generates our recommendation to the Secretary of the Treasury. In our voting for the San Antonio Missions National Historical Park coin, each design candidate could earn up to 30 points. (10 members were present, and each could assign 1, 2, or 3 points to each design.) This is how our voting went: 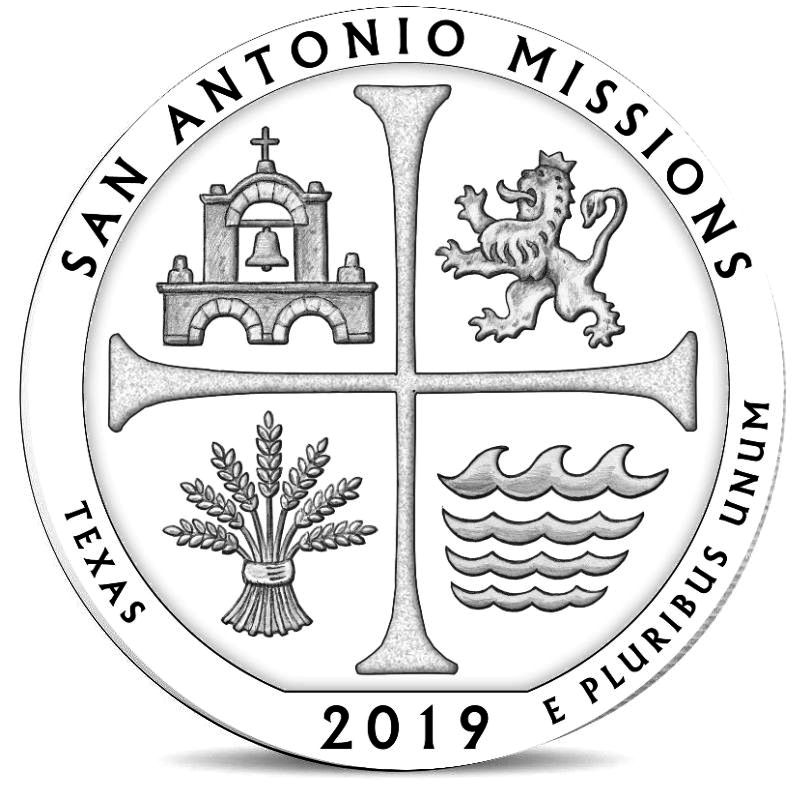 With TX-03B coming in just one point shy of a perfect ranking, it will be our formal recommendation to the Secretary of the Treasury for the design of the San Antonio Missions quarter in 2019.

Next: the Frank Church River of No Return Wilderness (Idaho) quarter.