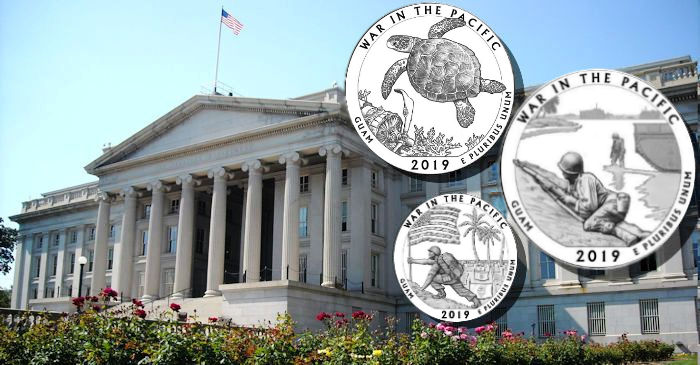 Every time I go to Washington for a meeting of the Citizens Coinage Advisory Committee, I visit the gift shop on the ground floor of United States Mint headquarters at 801 Ninth Street. Most of the facility is closed to the public, but the lobby gift shop (they call it a “sales counter”) is open from 10:00 a.m. to 5:45 p.m. during the week and anyone can stop by and browse the latest Mint products, as well as older pieces. 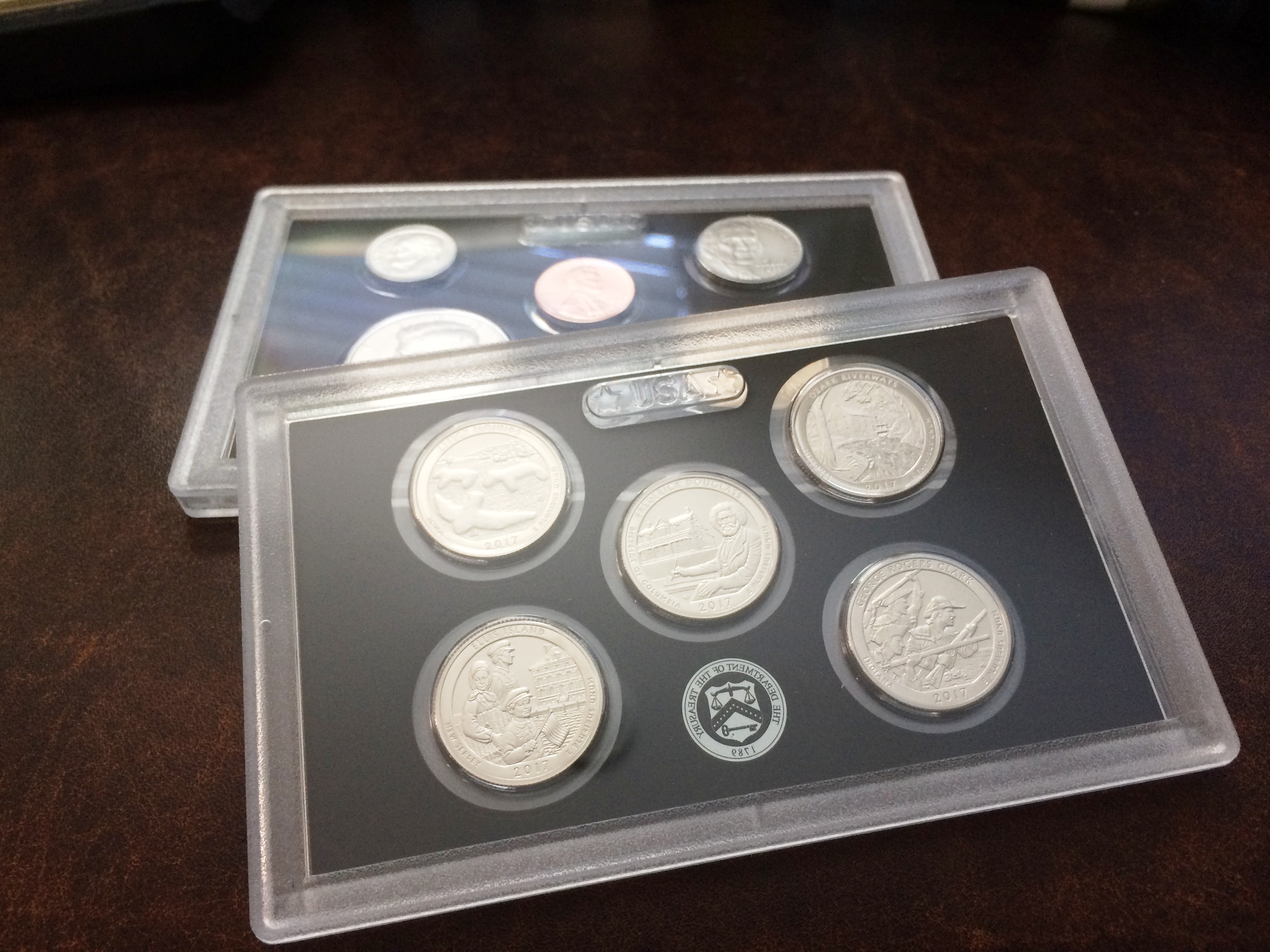 After our September 19, 2017, CCAC meeting I stopped by and bought a 2017 Enhanced Uncirculated coin set. This is a special set made for the Mint’s celebration of the 225th anniversary of American coinage. It contains 10 coins with “Enhanced Uncirculated” finishes, each bearing the S mintmark of the San Francisco Mint. It’s an attractive collection of the Mint’s current coinage, including the year’s five America the Beautiful quarters.

Designs for the 2019 America the Beautiful quarters were among those the CCAC convened to study in our September 19 meeting. The first two portfolios of quarter dollar designs were for Lowell National Historical Park (in Massachusetts) and American Memorial Park (in the Northern Mariana Islands). The third was for War in the Pacific National Historical Park in the U.S. territory of Guam.

Guam’s only official national park was created to remember the bravery and sacrifice of everyone who participated in the campaigns of the Pacific Theater of World War II—including, interestingly, the Japanese.

The National Park Service’s acting superintendent for Guam, Mr. Paul Scolari, was on the phone line for our meeting, despite it being well past 1:00 in the morning in his time zone. He described War in the Pacific as being a historical park (including two important landing-beach battlefields) more than a living park, although it does include natural and scenic areas. 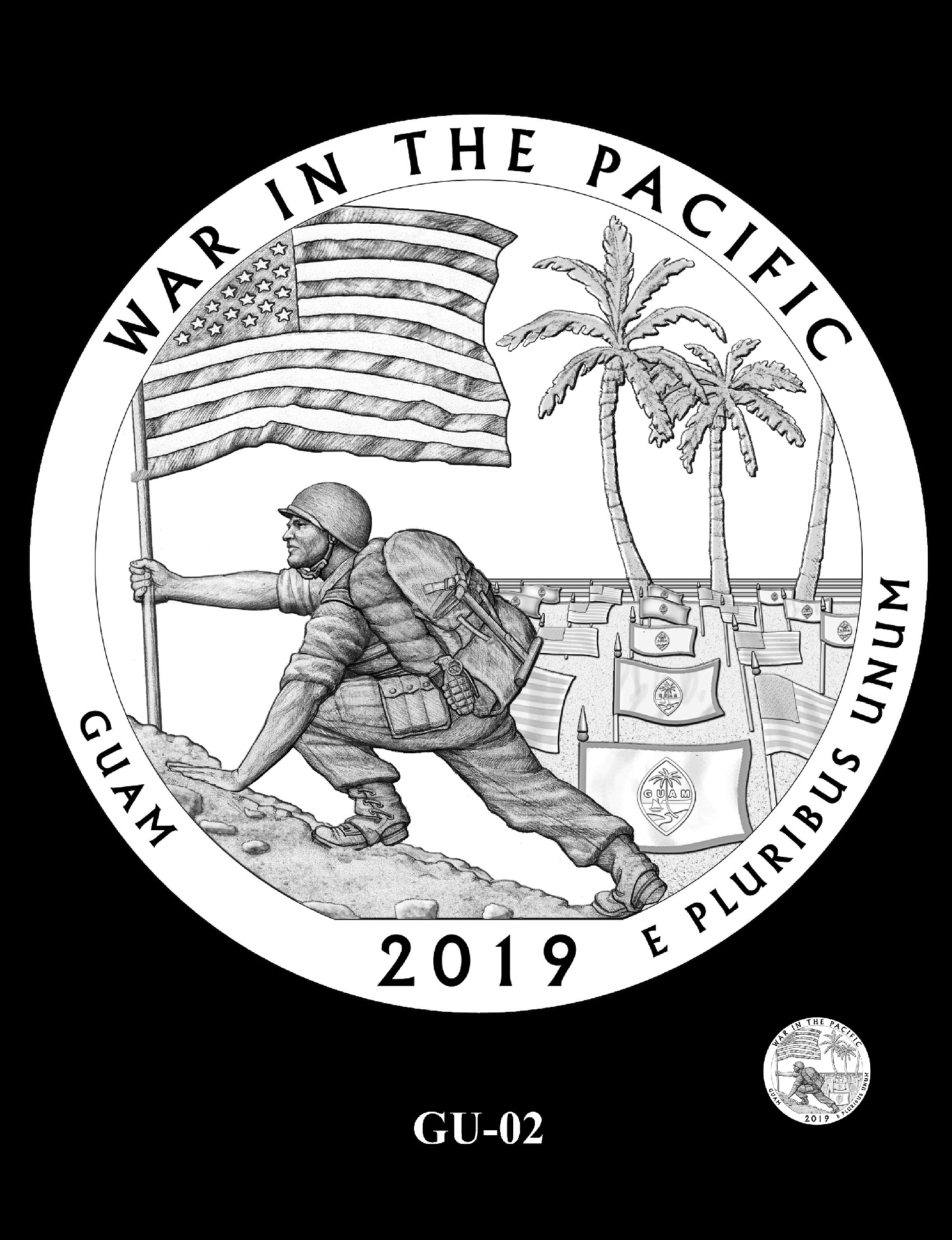 The 1944 liberation of the island is very important, he said, and the Park Service’s preferred design, GU-02, commemorates it in a very active way. Scolari noted that Memorial Day is a significant celebration on the island, with traditional displays of U.S. and Guam flags, as seen in the right-hand portion of the design. 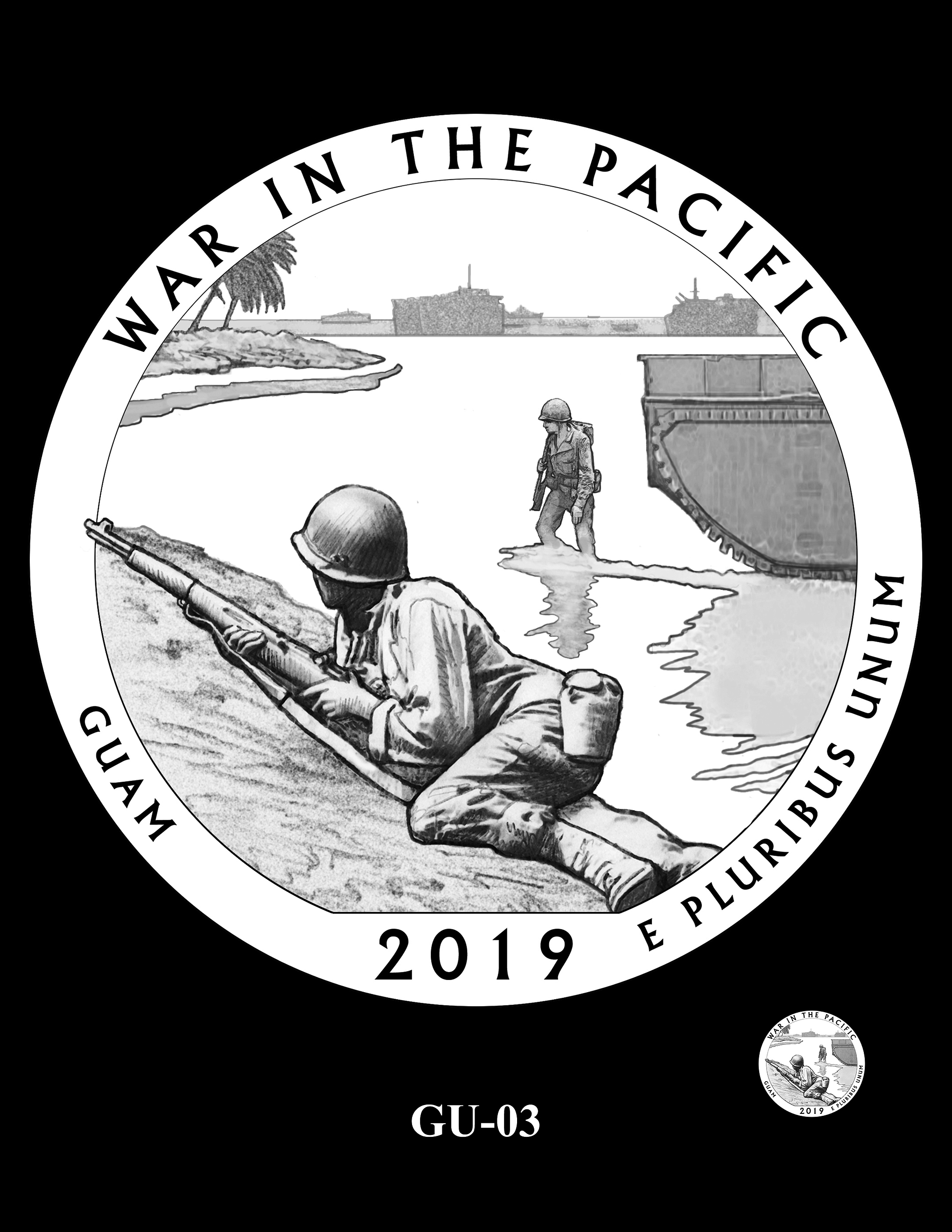 Another military-action design, GU-03, was developed with a lot of input from park staff based on photographs from World War II.

Scolari called GU-03 “compelling and raw,” and “a very realistic portrayal of the assault on Guam.”

To me, GU-02 is the design that most dynamically illustrates the military action of the war along with the scenery of its locale. It would translate well to the three-inch diameter of the five-ounce silver bullion version. My only concern is the angle and position of the Marine’s right foot: it appears to be to the foreground of his left foot and simultaneously twisted to the right, which would throw him off balance. This is the type of thing the Mint’s artists can review and either decide to keep (for dramatic tension) or modify. To me, GU-03 lack the energy and sense of urgency of GU-02, although it meets what I consider a crucial requirement of this coin: it shows World War II military action.⤵️

There was a general—though not unanimous—sense among the committee that showcasing the wildlife and flora of War in the Pacific National Historical Park would diminish the park’s war-memorial purpose (and, by extension, the purpose of its quarter dollar). We did, however, appreciate the artistry of the designs that incorporated green sea turtles, Moorish idol fish, coral, and underwater plant life. 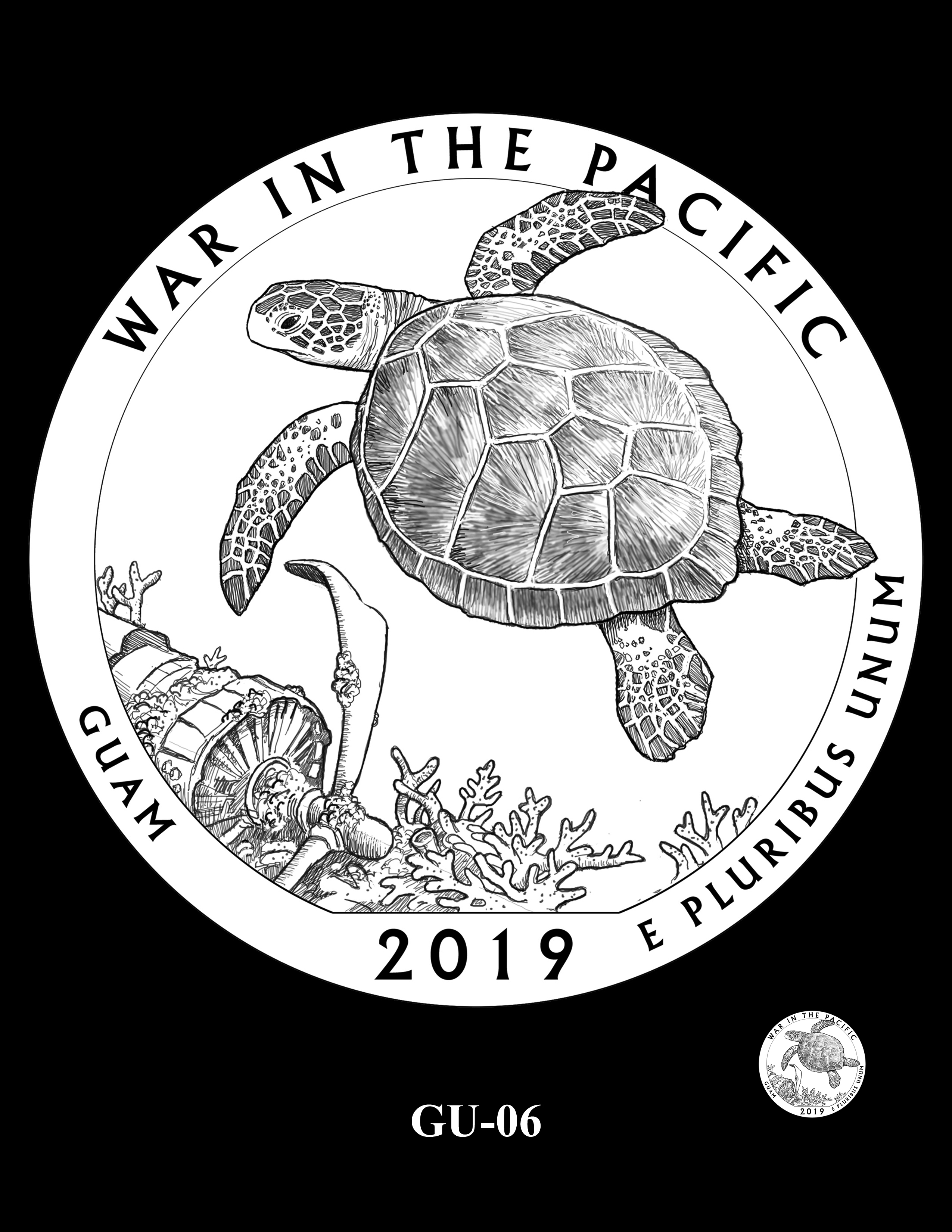 Member Erik Jansen called GU-06 “a provocative melding of two very different worlds.” Dr. Herman Viola, a U.S. Navy veteran, said that “biodiversity is nice, but not crucial or appropriate” to this coin. He spoke about the emotional connections that veterans feel when they visit military memorials. 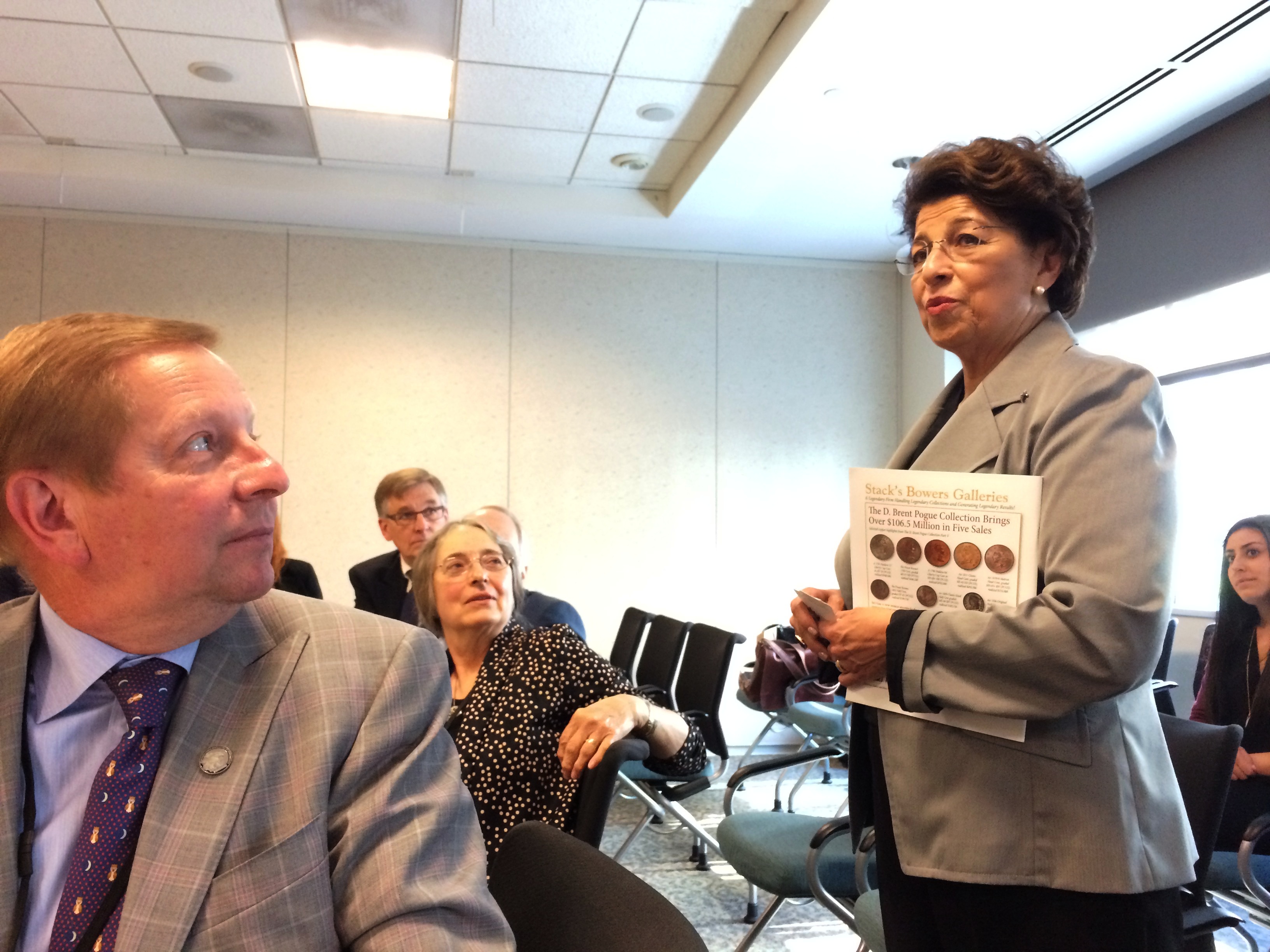 Member Jeanne Stevens-Sollman said that featuring animals would be a “frivolous” way to show what happened in Guam during the war. She singled out GU-03 for its artistic use of negative space and reflections. Member Thomas Uram would have liked to see a scene showing flags and land above, with water and sea life below. “I’ve voted for every turtle so far,” he noted, humorously observing that the Secretary of the Treasury has yet to approve a quarter with a tortoise or turtle, despite several CCAC recommendations. Uram gave his support to the National Park Service’s preference, design GU-02.

Member Robert Hoge, disagreeing somewhat, said, “I like the biodiversity aspect and would like to see it” on the coin. He called out design GU-06, showing both animals and the relics of warfare, although he suggested substituting something other than aircraft, since no downed planes actually rest in the waters of the park. Hoge sounded a warning about GU-03, noting that showing the water’s reflections could be difficult in coin form: “This is a sculpture, not a drawing, that we’re trying to convey.” 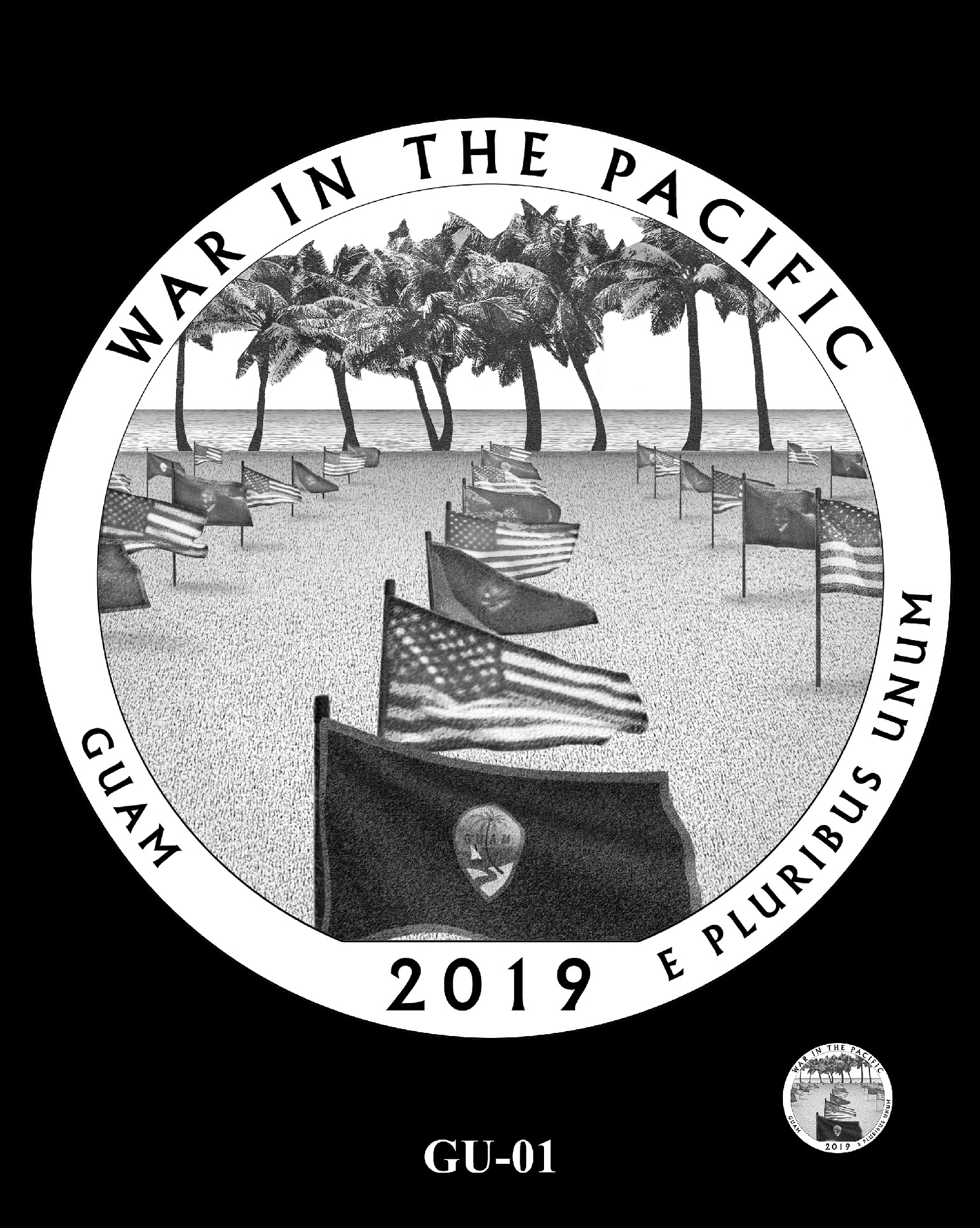 To the latter point, member Mike Moran, looking at design GU-01, had a message for the Mint’s Artistic Infusion Program artists: “Artful shading will not coin. Stop doing it!” This is something other committee members have noted in CCAC meetings. The grayscale and shading that impart detail in a pencil sketch are difficult to translate to die-struck metal. There are some things the Mint can do with laser texturing and other sculptural techniques to give the suggestion of shading, but the media are not equivalent. A design that depends on shading at the draft stage has a hard road to travel if it wants to become a coin.

Returning to the tension between military themes and scenes of natural splendor: Acting Chair Donald Scarinci gave an impassioned plea, saying that American coinage has “too much war.” “We look like all we do is make war,” he observed, giving examples of recent commemorative coins honoring the U.S. Army, World War II, Infantry soldiers, the Medal of Honor, and similar themes. World War II, he said, “was about protecting the planet, including animals,” and for that reason he preferred design GU-06 (although with a different war relic, for better historical accuracy). “Guam is more than World War II.” He also noted that “People like turtles, and the coin will sell well” in its silver bullion form. 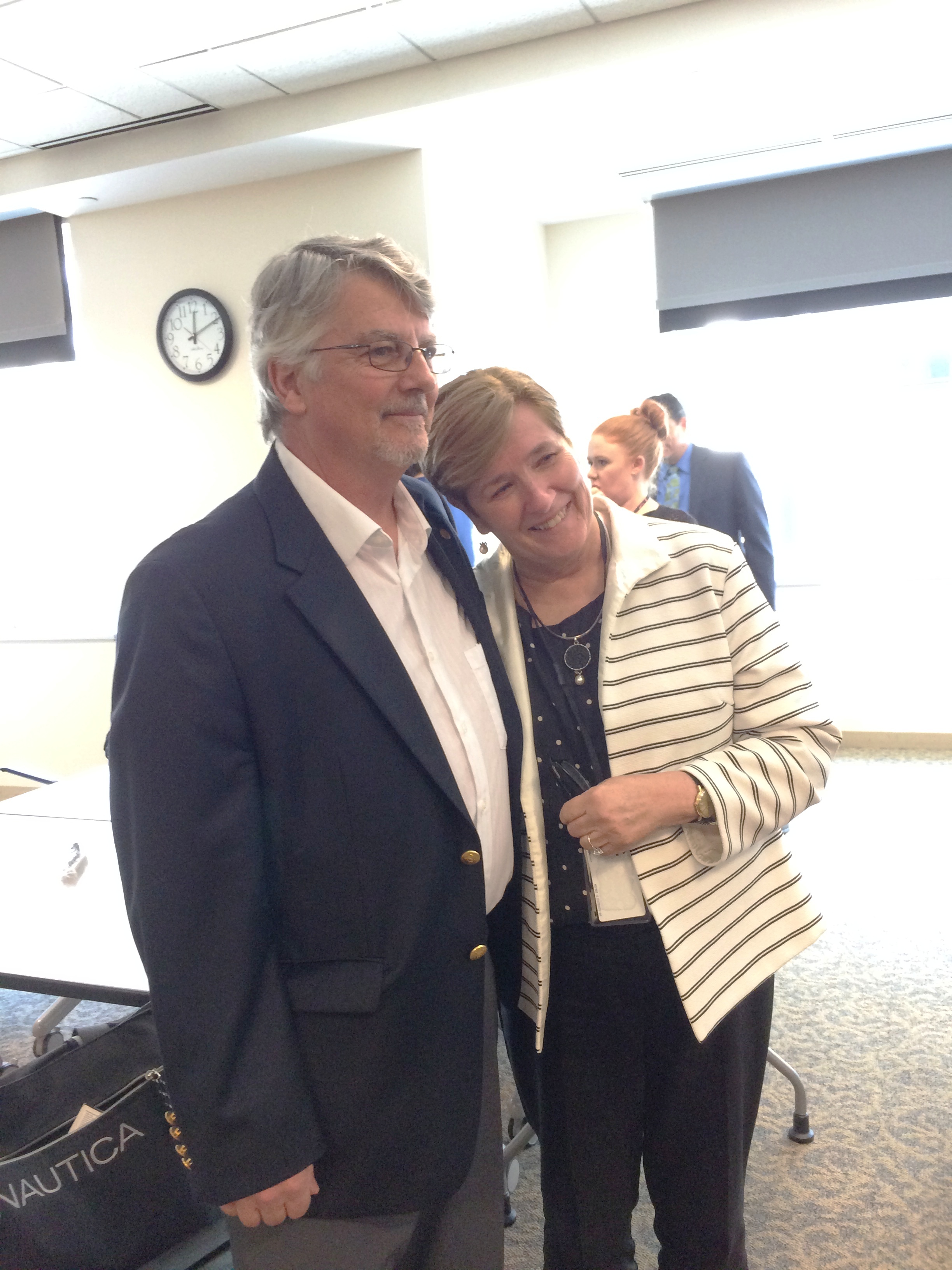 CCAC member Mary Lannin (right), with now-retired U.S. Mint sculptor-engraver Don Everhart, June 2017. Lannin is a noted expert in ancient coinage, a freelance editor for numismatic publications, and a volunteer on the Industry Council for Tangible Assets’ anti-counterfeiting task force. Her childhood love of coin collecting was rekindled when she purchased a Roman denarius once owned by President John Quincy Adams, himself a collector.

Member Mary Lannin said, “I was sold by Donald’s comments,” giving her preference to design GU-06, while also giving a nod to GU-03 for its depiction of quiet vigilance on the battlefield.

On the other hand, member Mike Moran pointed out that so far, none of the America the Beautiful quarters have depicted a modern war. The half dozen or so quarters with military themes honor national parks with battlefields from the 1700s and 1800s. 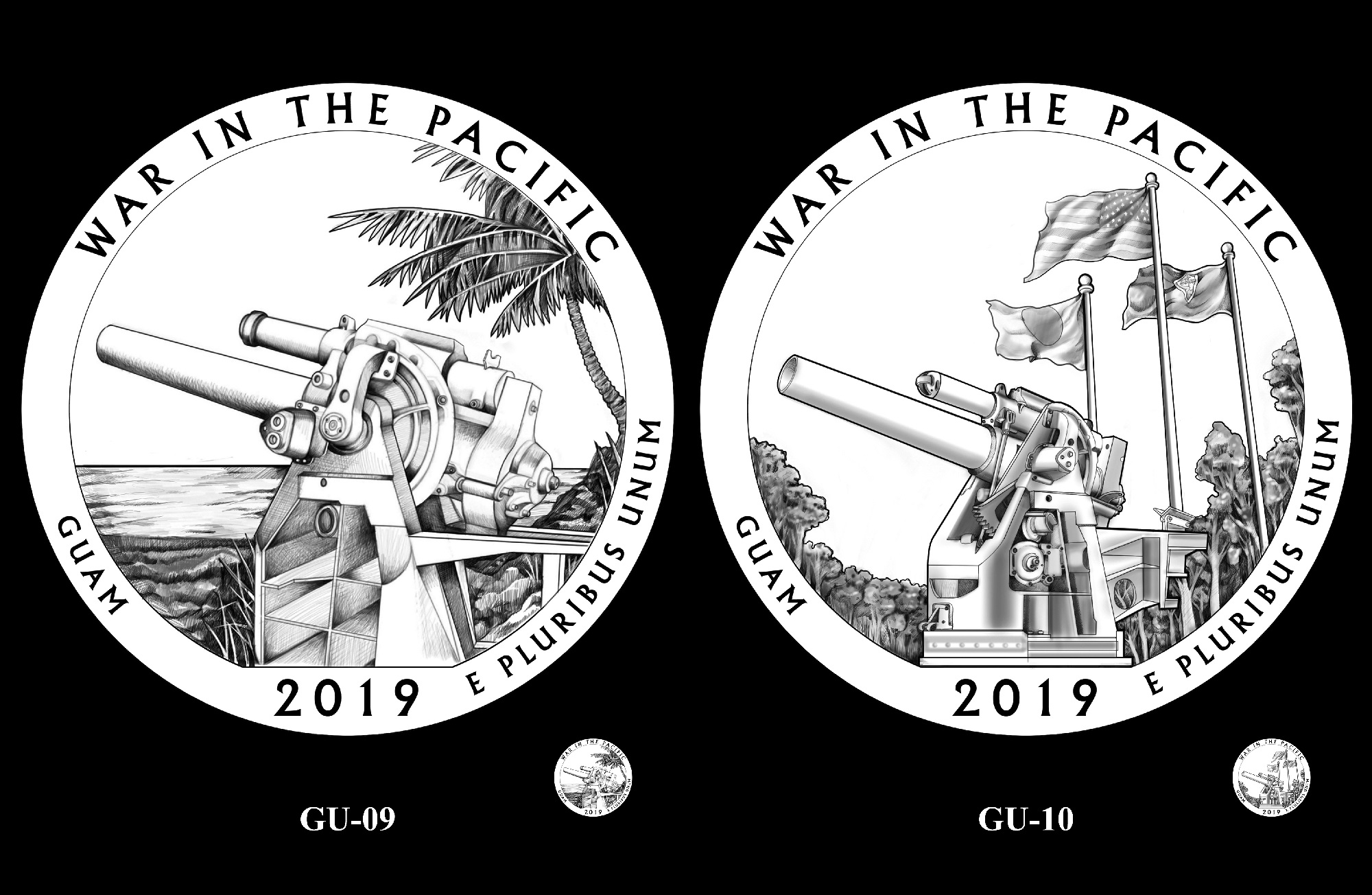 There was also general agreement that designs GU-09 and 10, showing a double-barreled cannon at Ga’an Point, nicely memorialize a significant military landmark. However, the fact that this is a Japanese armament makes it less appropriate for the coin, since we have other opportunities to focus on American and Allied war efforts.

Member Heidi Wastweet, president of the American Medallic Sculpture Association, observed that the creator of GU-02 was showing both the past and the present (a Marine from World War II, and a Memorial Day observance of today). She recommended some corrections to the Marine’s anatomy if this motif is chosen, but noted that it wasn’t her first choice. “I like this design,” she said, “but it doesn’t have the ‘wow’ factor.” As for GU-05 and 06, they have a resonance, Wastweet said, but she found the turtle and fish overpowering, and balancing them with more emphasis on the military relics would require a complete design change. Speaking as an artist, she declared GU-03 to be the strongest of the design portfolio. “Too much detail doesn’t work,” she said, “and this is an example of the solution to that.” She described the design as being pared down to essentials and shapes, allowing the viewer’s mind to fill in the rest. 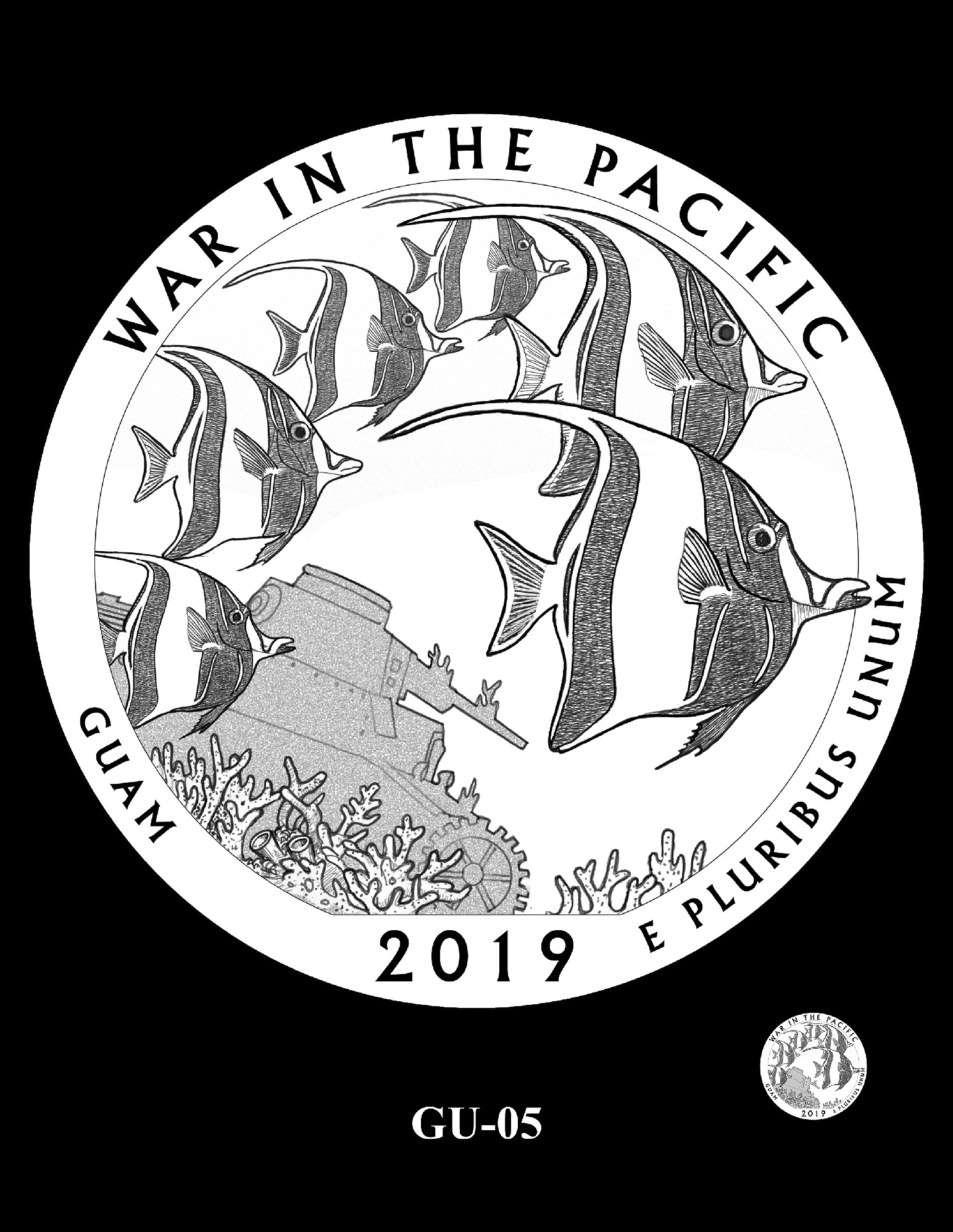 As examples she mentioned the merger of the water with the background soldier’s legs, and the suggestion of waves at top left, with the central polished fields giving contrast and visibility.

Our Vote for War in the Pacific National Historical Park, and Our Recommendation to the Treasury

Congress established the Citizens Coinage Advisory Committee as a public body qualified to advise the Secretary of the Treasury on themes and designs for circulating coins, bullion, and medals. We’re an 11-member committee with each member either specially qualified in a specific field, recommended by a member of Congress, or chosen as a representative of the general public.

Part of our process in coming to a recommendation for any given coin is to take a vote after we discuss and analyze its design proposals. In our voting for the War in the Pacific National Historical Park coin, each design candidate could earn up to 30 points. (10 members were present, and each could assign 1, 2, or 3 points to each design.) This is how our voting went: 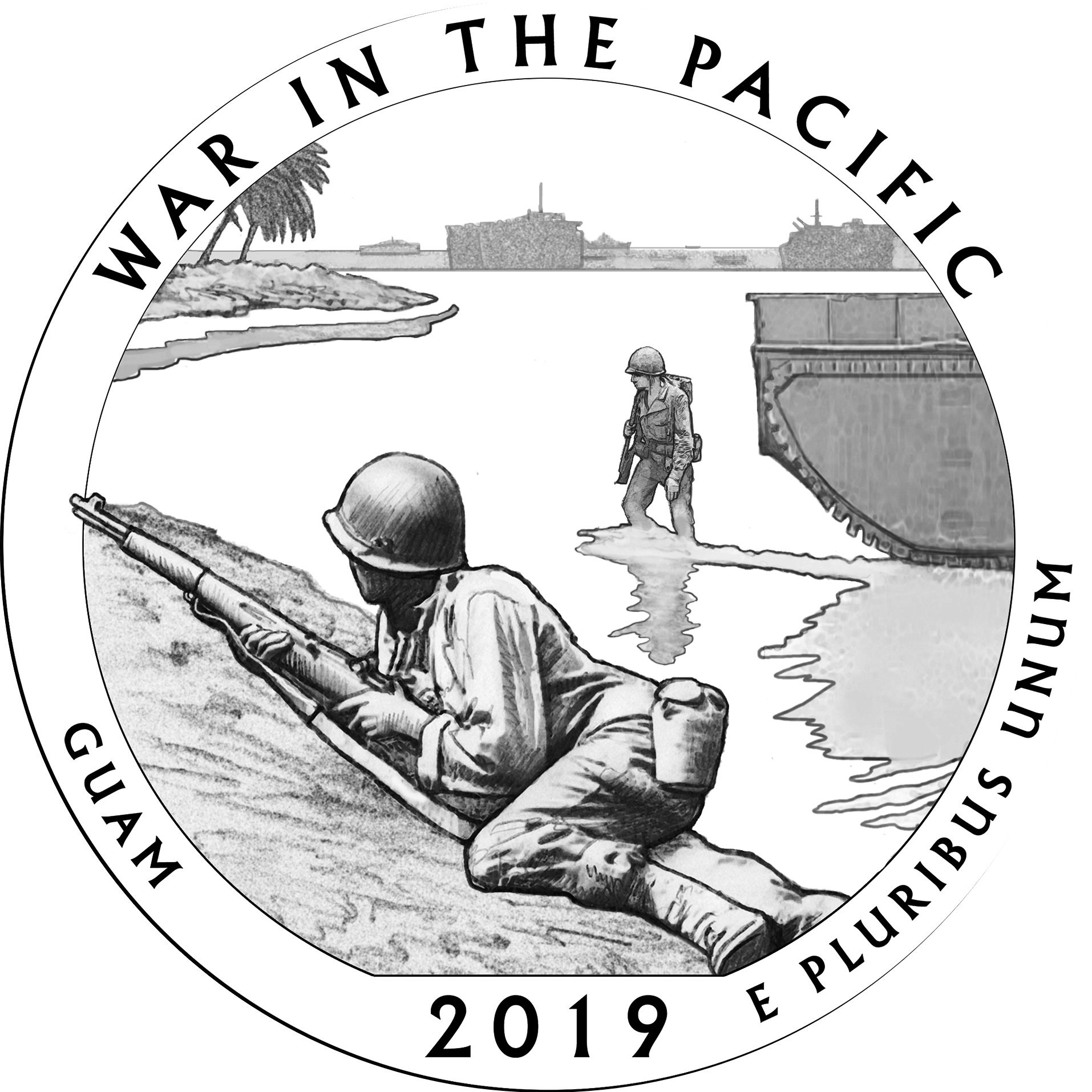 In a second tie-breaking vote with a simple show of hands, GU-03 won our recommendation 7 to 3. This will be the design for War in the Pacific National Historical Park that we formally recommend to the Secretary of the Treasury.