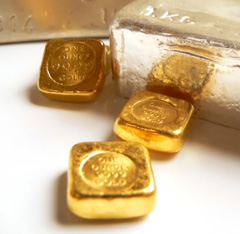 In my column of various ways that an investor could consider purchasing some form of gold or silver, I neglected to include some of the more recent options that have become available.  Several readers asked for my thoughts on some of them.  I am pleased to oblige.  Though I may not be fully aware of all the details of how they operate, let me share some of my observations.

In 2001, James Turk established GoldMoney.com in Jersey in the Channel Islands off the coast of Great Britain.  The concept is simple.  Someone can establish an account based on ounces of gold or silver, make purchases and sales, and even transfer funds in a variety of currencies.

I have met Mr. Turk a few times and have a high regard for his professional experience, his strong analytical skills, and the research he has done to try to develop a quality product with customer safeguards.

Account holders own allocated gold or silver, on which they pay reasonable acquisition charges and storage fees.  The company’s accounts are independently audited to verify the existence of the physical metal and proper accounting thereof.

This concept of establishing a bank account where the unit of account could be in gold or silver or a variety of currencies is an old idea.  R. W. Bradford, who founded Liberty Coin Service in 1971, the company I now own, investigated doing so in the late 1970s.  The State of Iowa had 31 state-regulated banks that were not subject to federal regulations.  Such banks would be allowed to establish accounts in units of precious metals or foreign currencies.  At the time, Bradford negotiated an agreement with me that if he could acquire one of these banks, I would become the bank’s president to implement these ideas.  Bradford found one bank in a small town owned by a very old man who had never married and had no descendants.  Unfortunately, the owner was simply unwilling to sell, so I never had the chance to initiate gold and silver bank accounts.  A couple years later, I became part-owner and chief operating officer of Liberty Coin Service when Bradford retired from day-to-day operations.

Would I recommend such an account?  I don’t know enough information to do that, so I would urge potential account holders to do their own thorough investigation.

There are two potential tax problems with Americans who own such an account.  First, if the account is with a non-US company such as goldmoney.com, it may be necessary to check the box on your federal income tax form acknowledging that you have such a foreign account.  Second, every time there is a reduction of the account balance, such as to transfer funds, that would constitute a sale.  Therefore, Americans would be required to report each reduction of the account balance on their personal tax return and figure the gain or loss for each “sale.”

[Editor’s Note: Please refer to the additional information provided by BullionVault in the comments to this article.]

A program offered by BullionVault.com (founded about 2005) is similar in a lot of respects to GoldMoney.com, but appears not to include a payment processing service.

This company seems to be set up mostly for larger accounts as gold holdings are in the form of good delivery 400 ounce bars.  It is possible to own smaller accounts, but they would only involve ownership of a fraction of a 400 ounce bar.

Physical delivery of the gold can be arranged, but only in units of 400 ounce bars.

I have not met the management or ownership of this company, so have no information on the caliber of them.  The management acknowledges their background as computer professionals rather than precious metals traders, so apparently make available a high level of disclosure for a small fee.  The company also claims that its holdings are audited on a daily basis to reconcile with customer accounts.

BullionVault.com is now a member of the London Bullion Market Association (LBMA), which normally would be a sign of financial strength.  However, LBMA contracts are theoretically 100% backed by physical metals.  At the Commodity Futures Trading Commission hearings on March 25, 2010, two different speakers testified that the LBMA now has only enough gold and silver in its vaults to cover 1-3% of its outstanding contracts.  I was unable to tell if some of BullionVault.com’s position consisted of LBMA contracts.  If you are considering an account with them, you should definitely get clarification on this issue.  If the position is backed in part by LBMA contracts, I would consider this to reflect only the ownership of paper metals, which I consider risky.

The premiums, commission fees, and storage fees look to be competitive but are most reasonable for those who trade in units of 400 ounce gold bars.  That points toward customers who can afford accounts of $600,000 in value or more.  Commission fees also decline if the account holder engages in frequent buying and selling rather than a sit and hold posture.

The same tax concerns that apply to GoldMoney.com also apply to this company.

So, Sprott established the Sprott Physical Gold Trust ETV (PHYS) and Sprott Physical Silver Trust ET (PSLV) so that investors could own shares backed by gold and silver bars that were stored at the Royal Canadian Mint.  Shares trade at varying premiums above the intrinsic value of the underlying inventory.  These premiums are often so high that it is possible to directly purchase physical gold and silver at a lower cost per ounce.

Generally, the Royal Canadian Mint (RCM) has a great reputation.  It is a Crown Corporation owned by the Canadian Government, so operations are not focused on meeting quarterly targets to satisfy shareholders.  The Mint also does not have a profit-sharing plan, so employees have no incentives to try to cut corners to increase their bonuses.  Instead, the focus is on producing top quality products.

My own company has sometimes shipped scrap gold to the RCM to be refined.  Still, the RCM did have a disappearance of $17 million of gold a couple years ago which was never clearly resolved despite a year of exhaustive investigations.  Since then, my company has not shipped gold scrap to them for refining.  Despite all the safeguards that the Sprott trusts have established (as have similar funds such as CEF) I would much rather pay a lower premium and get my own hands on the physical metals.

For short term holdings, these above accounts probably do not carry a high risk of default.  Still, I am biased toward direct possession of physical gold and silver to provide the greatest security that you really do own them.