Collectors have a little more than one day remaining to place their orders for the United States Mint’s 2013 West Point Silver Eagle Set. The product originally went on sale on May 9, 2013 with orders only accepted during a four week ordering window concluding tomorrow June 6, 2013 at 5:00 PM ET.

The special set is issued to mark the 75th anniversary of the West Point Mint and contains American Silver Eagles with a reverse proof and uncirculated finish. These are both struck at West Point and carry the “W” mint mark. The US Mint has specifically stated that these two coins will only be available within the set. 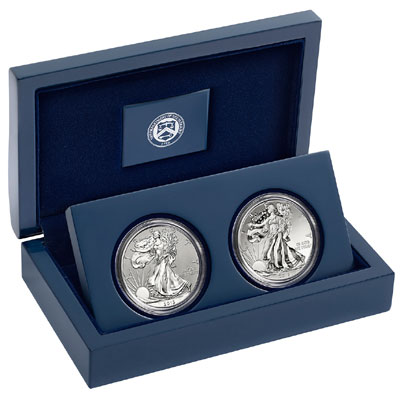 Rather than specifying a specific mintage limit, the US Mint will only accept orders during the indicated four week ordering window. The sets will be produced to meet demand for orders placed during the period.

Throughout the course of the offering, the Mint has posted an indication of the total units ordered on the product page. The most recent updated provided today shows that 243,226 sets have been ordered. The Mint indicates that this amount is an approximation of total units ordered through active sales channels. It is provided for informational purposes and should not be construed to represent accepted orders or actual sales figures.

Last year, a similar “sales odometer” was used to provide an indication of orders for the 2012 San Francisco Silver Eagle Set. The last reported figure was 251,302, which was subsequently adjusted downwards to a final unaudited sales total of 224,981 units.

The 2013 West Point Silver Eagle Set is priced at $139.95. The Mint has indicated that shipping for the product is expected to begin in mid to late June. Newly placed orders have an indicated shipping date of 09/30/2013.