There is a marked difference between bidding in a live, onsite auction as opposed to an online one on eBay, Proxibid, or another such portal. The advantage of bidding online is an array of coins that will satisfy any collector, from medals and exonumia to ancient and modern coins.

The downside, however, is steep. You must read the terms of service to see if the seller is bidding on coins, an unethical practice called shill bidding, which is not allowed on eBay, although sellers get around that restriction in untold devious ways (beyond the scope of this post), and is allowed on Proxibid as long as the seller acknowledges that in the terms of service. Then there are photographs. Many estate auctioneers are horrible numismatic photographers. Worse, some only show the obverse of a coin. Next there is shipping and all manner of fees, including buyer’s premiums on many estate and major auction sites.

Bidding basics begin with where you want to bid and for what items. While eBay by far offers the most variety, it also exposes buyers to the most competition. Rarely do you win holdered coins by PCGS and NGC under wholesale. And many raw coins are cleaned or damaged with no possibility of returns, although that varies from seller to seller.

If you bid on Proxibid, you’ll be facing these and other woes. Terms of service sometimes are ridiculous, as with this seller, who announces: “This is an online auction only. We do not ship items. Contact The Packaging Store … if you want items shipped.”

One has to wonder what business this seller has on the Internet. Shipping is fundamental with online auctions.

The beauty of bidding on Proxibid is the opportunity to snag valuable coins at giveaway prices, if you know what you are doing and can discern condition, mintage, potential flaws, and more.

Consider this beauty, won on Munda Auction with a bid of $250 plus 20% buyer’s premium: This graded almost uncirculated by NGC, worth more than $1,000. I visit it regularly in my bank box.

Read the terms of service. Be sure to study these thoroughly. Many eBay sellers do not accept returns, no matter what went wrong with the sale or delivery of the items. (You can  always open a dispute on eBay, but those rules can be complex on a case-by-case basis, with typically a weeks-long wait for any type of resolution.) Proxibid sellers may have other restrictions, usually “ALL SALES FINAL,” which many estate auctioneers believe applies to counterfeit coins (which it does not, according to the US Hobby Protection Act). You can open up a dispute on Proxibid if indeed a coin is counterfeit, which I have done more than a half dozen times successfully.

Only bid when photographs are sharp. Typically, eBay has better photos than Proxibid due to its selling rules: “Include a clear picture of the actual item being sold—don’t use stock photos.”

Over the years, photos on Proxibid have improved, but you can still find ones like this, which makes it impossible to tell condition: Before you bid on any coin, you must be able to discern its condition (if it is not graded by NGC, PCGS, ANACS [or ANA], or ICG). Treat any other slab as a raw or uncertified coin, no matter what the slab—even SEGS and older PCI—might say. If you’re a regular viewer of Coingrader Capsule, you should be able to make determinations about condition, readily identifying any number of common flaws. Read this Coin Update post about the 12 most common flaws in coins online.

OK. Let’s review some of the basics at this point:

1. Know where and on what you want to bid, eBay or Proxibid or some other portal.

2. Read the terms of service to learn about shipping, fees, buyer’s premiums, and other conditions.

3. Only bid on coins with clear photographs.

Before bidding in any online auction, identify sellers that have good ratings and varied coin selections. Both eBay and Proxibid have ratings data, although eBay’s is much more informative because you can see complaints spelled out concerning negative reviews. On Proxibid, you can see how many of five stars an auction company received and for what service. For instance, Munda Auction (which sold the ancient Corinth stater above) has about 4.75 out of 5 stars. 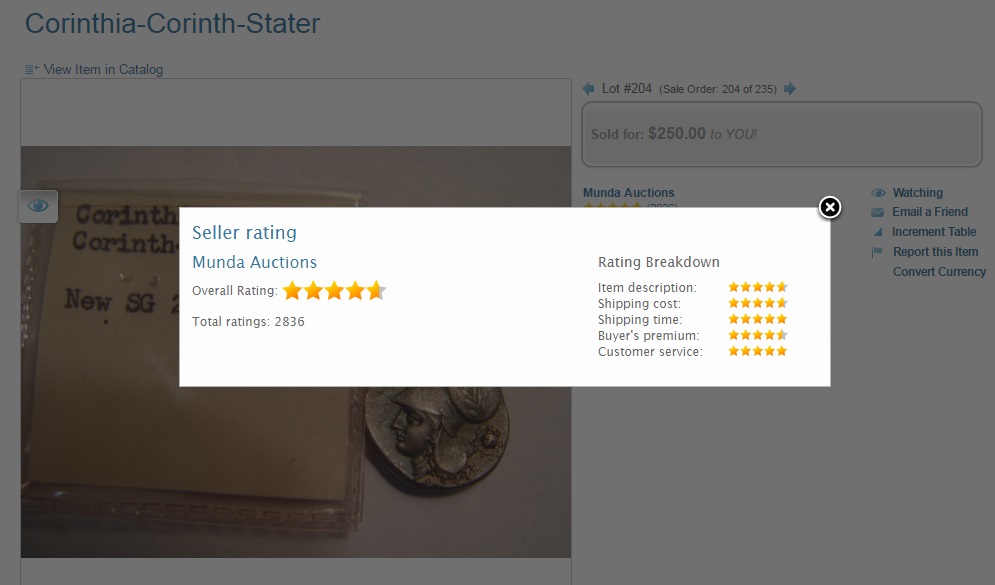 Now let’s review bidding basics covered so far. You can pre-bid your maximum on eBay and in many Proxibid auctions without the seller seeing it. Doing so lets you leave the bid unattended so that you don’t have to be online at the close of the lot, unless of course if you are outbid. Both eBay and Proxibid will inform you about that before the auction ends.

Think twice about bidding on coins with high reserves. Some Proxibid auctions open bidding at retail. Same goes for eBay “Buy It Now” auctions. Best to visit a coin shop. Don’t bid on these unless you really want the coin.

Many of the best coins are won during the closing seconds of an eBay auction or during a live session on Proxibid. Be advised that some eBay bidders use sniper programs such as EZSniper, which places maximum bids at the last second of a sale. Sniper programs are not used on Proxibid. You can have an advantage by attending the live auction because many Proxibid buyers simply rely on pre-bid maximums. So by going live you can win coins by one or two bids above those earlier placed pre-bids.

All this assumes you know what you should bid on, graded or raw coins. For starters, remember the point of an auction: that is, to get a coin on the cheap. My goal is to win lots under wholesale dealer prices. If the coin is graded by a major company, such PCGS, I never use online price guides that list retail values. I use PCGS CoinFacts to know auction sale values, which typically are about one-fourth to one-third lower than retail list prices. When it comes to raw coins, never believe what the seller states about the coin. Descriptions are usually hyped, and you want to be skeptical. If you think a coin is MS64, bid as if it were AU58. There are countless flaws that never show up in photographs, and if all sales are final, you have to live with that.

Here’s a perfect example. This Proxibid seller states the raw coin is deep mirror prooflike MS63. He is supposedly not allowed to state a numerical condition on a raw coin, according to Proxibid rules. But many sellers simply ignore that rule. (You can report it to Proxibid customer service or use the “report this item” link provided next to the lot.) The coin above seems to have milk spots all over it, which would disqualify it from a PCGS or NGC designation, especially if it was cleaned, which I think this is. I wouldn’t bid on it. But if I did, I would low-ball the figure, at $35 or so, rather than the PCGS stated retail value of $260. Sometimes you can win acceptable coins with low-ball bids, even if they are flawed, as this one probably is.

If you won a coin, you have to decide whether to use your credit card, PayPal or some other means such as a personal check. You’ll see how this is done when you read the terms of service. Many Proxibid sellers us Auction Payment Network, which I appreciate because of its secure nature. Some estate auctioneers on Proxibid want you to call the company with your credit card or debit numbers. I usually decline to do this because I don’t want my secure information stored on someone’s computer. Some Proxibid auctioneers will accept personal checks and even give a discount for that. But use of checks will delay delivery of your items until the check clears your bank.

Most eBay sellers use PayPal.

If you use a credit card, you should select one that provides cash rewards for purchases. You can get eBay bucks when you win lots in that venue.

One final review of bidding basics. Above we covered 1-3 (knowing where to bid, reading terms of service, and seeking clear photographs of coins). Next we covered:

To be sure, there are many more facets to bidding in online coin auctions. Share your experiences in the comment section below!   ❑