The U.S Mint has announced that it will begin selling the 2015 John F. Kennedy $1 Coin Cover at noon on Thursday, July 16. The Kennedy $1 Coin Cover is the 35th release in the cover series and includes two circulating finish presidential dollars, showcasing both the obverse and reverse of the coin.

As with other covers in this series, the coins are mounted on a display card that rests inside a larger envelope. The envelope features a U.S. Red, White, and Blue Forever stamp, postmarked with the date of the cover’s issuance and President Kennedy’s birthplace: July 16, 2015, Brookline, MA. The President’s portrait is featured beside the coins, placed over an image of the American flag. Beneath the portrait is mintage information stating that the dollars were sourced from the first day of production at two U.S. Mint facilities–one dollar was made on March 5 at the Philadelphia Mint, the other on March 3 at the Denver Mint. 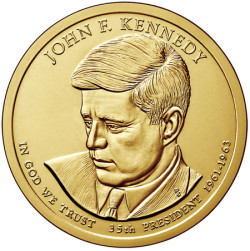