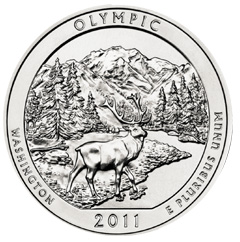 The United States Mint has provided details for the next release of the America the Beautiful Silver Bullion Coin Program. The 5 ounce silver coins featuring Olympic National Park will go on sale to authorized purchasers on May 23, 2011.

This will represent the third design released for this year. The prior two designs featuring Gettysburg National Park and Glacier National Park went on sale April 25, 2011.

As with other bullion coin offerings of the United States Mint, the coins will be sold in bulk quantities to a small group of primary distributors known as authorized purchasers. This group will be able to buy the coins based on the market price of silver plus a premium of $9.75 per coin. The market price of silver is determined on the London Silver Fix on first business day following the order. Once the coins are received by the authorized purchasers, they are distributed more broadly by reselling to other bullion dealers, coin dealers, and in some cases, directly to the public.

The Olympic National Park 5 Ounce Silver Coins depict a Roosevelt elk standing on a gravel river bar of the Hoh River, with Mount Olympus visible in the background. This was designed by Susan Gamble. The obverse features a portrait of George Washington designed by John Flanagan.

The US Mint has indicated that they will make an initial quantity of 126,700 coins available for the Olympic National Park release. The 2010-dated issues each had a significantly lower mintage of 33,000 per design. The first two 2011-dated issues had a mintage of 126,500 each. The US Mint intends to have a minimum of 126,700 coins available for the subsequent 2011-dated designs.