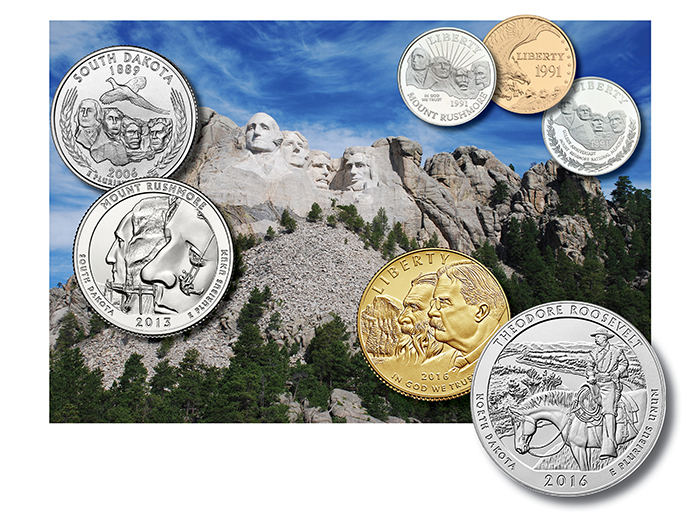 America’s national parks have been the subject of the America the Beautiful® Quarters Program since 2010, when the Hot Springs National Park quarter kicked off the series. This month sees the convergence of a president, Theodore Roosevelt, and one of the national monuments with which he is most strongly associated—Mount Rushmore.

On October 31, 1941, the final work on a national icon was completed. Now, 75 years later, the Mount Rushmore National Memorial in South Dakota celebrates a monumental (no pun intended) birthday in conjunction with the centennial celebration of the National Park Service.

Rearing 60 feet in height, the faces of Thomas Jefferson, George Washington, Theodore Roosevelt, and Abraham Lincoln took 14 years and more than 400 workers to complete. Construction began in 1927 under the direction of Gutzon Borglum and his son Lincoln. Initially, Doane Robinson, who is credited with coming up with the idea for the memorial, intended to feature heroes of the West such as Lewis and Clark and Buffalo Bill Cody. Borglum overruled, however, deciding the memorial should feature national figures, and the four presidents that we see today were chosen. They are duly appropriate—the founding fathers George Washington and Thomas Jefferson are names every student of American history knows; Abraham Lincoln earned his renown with his leadership during the Civil War and the abolition of slavery; and Theodore Roosevelt was a champion of conservation and national parks and forests. More than two million visitors are attracted to the site every year. The memorial has appeared many times in numerous works of fiction (both as it is and with alterations) and in popular culture. It was featured by the U.S. Mint in 1991 on a series of commemorative coins, including a half dollar, dollar, and gold $5 coin. There was even a rock band in the 1960s with the name Mount Rushmore. (Text continues after the slideshow.)

Roosevelt himself, one of America’s earliest conservationists, remains in the spotlight this month for collectors of modern Mint coinage. The Theodore Roosevelt National Park 2016 three-coin quarter set was released October 3, and the 5-ounce Uncirculated silver coin on October 6. 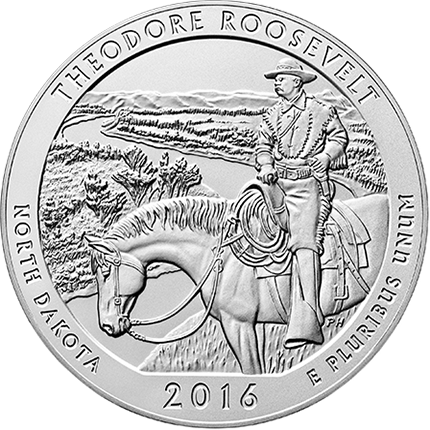 The Roosevelt National Park bullion coins went on sale to authorized purchasers (along with bags and rolls, to the general public) on August 29, a few days after the National Park Service’s 100th anniversary. The federal agency was established on August 25, 1916, by an Act of Congress for the purpose of managing all U.S. national parks and monuments, as well as for managing the conservation of other historical properties such as forests and waterways. The Mint produced a three-coin commemorative series in honor of the milestone, with the $5 gold coin featuring profiles of Roosevelt and one of America’s foremost conservationists, John Muir.

The celebrations for both anniversaries have been in full swing all year long, starting with the New Year’s Day parade in Pasadena, California, where South Dakota decorated its float with embodiments of the state’s history and culture, including a large recreation of the faces of Mount Rushmore. Individual events in each of the national parks around the country have also been taking place throughout the year, and on October 22, the Mount Rushmore Society will host the Black Hills Symphony in presenting the Mount Rushmore Suite in Rapid City, South Dakota. The featured performance will be Michael Daugherty’s Mount Rushmore.

There’s still time to take part in the festivities, either by visiting a nearby national park, making a trip out to Mount Rushmore itself, or trying to find one of the Mount Rushmore quarters in circulation.