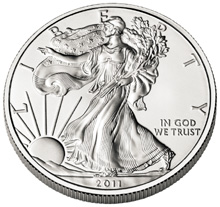 The month of October 2011 will include a number of new product releases from the United States Mint, as well as several coin conventions.

The United States Mint has recently scheduled the 2011-P Olympic National Park Five Ounce Silver Uncirculated Coin for release on October 25, 2011. This will be the seventh numismatic release for the large sized silver coins.

Many collectors are looking forward to the Perth Mint’s upcoming numismatic releases for the 2012 Year of the Dragon Silver Coins. The new products on sale October 4, 2011 will include colored versions, gilded versions, gemstone versions, and a typeset collection. Additional information about these coins is provided in this article.

From October 13-15, 2011, the ANA National Money Show will be held in Pittsburgh. Both PCGS and NGC will provide on-site grading and an auction will be conducted by Heritage. Later in the month, the Silver Dollar & Rare Coin Expo will be held in St. Charles, Missouri.