When I was first introduced to obsolete paper money, I was initially struck by their size, their complexity, and their color. I loved the bright overprints and tints, the deep red end panels, the intricate dies and lathework. The fact that there were thousands upon thousands of variations also impressed me – there seemed to be no limit to the designs and images found on these pieces of paper money that used to be so commonplace. Today we look at these treasures under glass cases or in slabbed holders for protection. We think about who signed them, who engraved them, who must have spent them on a horse or a pound of flour or a new coat.

But in the 19th century they would have been crumpled in pockets, stuck in wallets, passed from hand to hand. These would have been as much a part of everyday life as our own bills are today, and possibly taken as much for granted. It seemed amazing to me, thinking of it this way, that anyone could take these artistic and vivid notes for granted. But then, I had to admit that I do the exact same thing to the money in my own wallet, easily using it to purchase shampoo or bread or movie tickets without a single thought given to the design or the history. What interesting people may have held this very note that I pass to the cashier? Perhaps it was involved in some scandalous bank robbery, or given as a gift to a grandchild miles away, or sought as the last bill needed to make a dream come true. 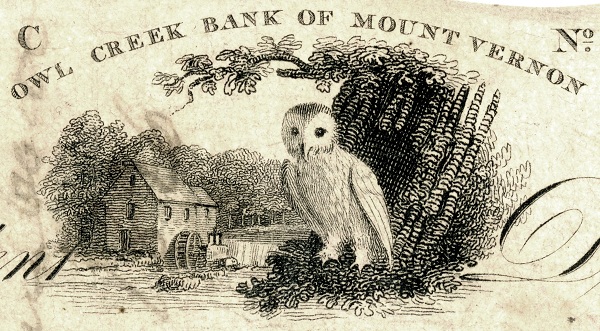 The owl of the Owl Creek Bank, Ohio.

Red end panels found on a note of the Southport Bank of Southport, Connecticut.

I soon began a small “mental” collection of my favorite vignettes and note features as I analyzed the images I saw – thousands and thousands of listings in the Whitman Encyclopedia of Obsolete Paper Money, authored by Q. David Bowers and a project I have the deep pleasure of working on as an editor at Whitman Publishing. I became fond of the red end panels I mentioned before, found on notes of the Southport Bank in Southport, Connecticut. The “cross-eyed buffalo” became a good friend whom I always reserved a chuckle for whenever he passed my way. His wild, curly hair and slightly angled eyes give him a ridiculous expression that mixes somewhere between fearsome and comical. The portrait of Solomon Downer, found on notes of the South Royalton Bank in South Royalton, Vermont, was extremely entertaining when I stumbled across it – the bank director certainly seemed to live up to his name.

The “Cross-eyed Buffalo” here seen on a note of the State Bank of Illinois, Illinois. 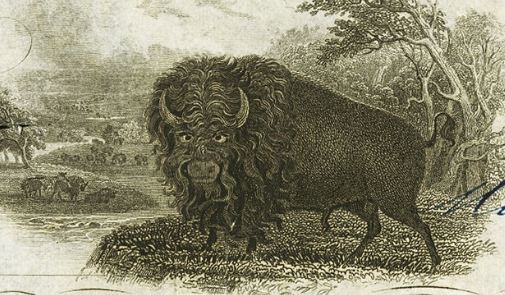 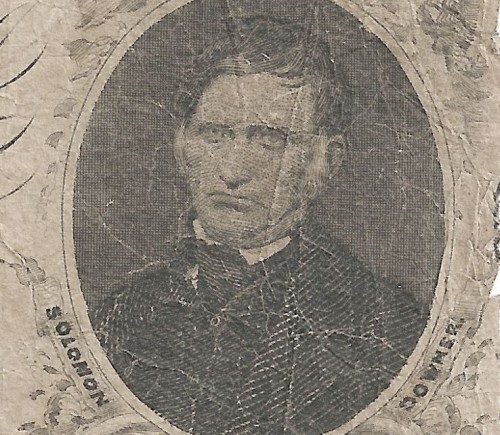 Solomon Downer’s portrait appears on a note of his bank, the South Royalton Bank, Vermont.

I then decided that if ever I were to obtain some obsolete paper money specimens for myself, I would probably concentrate on animals. Animals have always been a delight to me. When I was a small child I wanted to be a veterinarian, but I quickly decided the surgery aspect of the job would be too much for me. And so I drew animals incessantly, I read Jack London’s White Fang and Call of the Wild as well as the well-beloved books by James Herriot. It is natural then that the vignettes featuring animals on paper money should be my favorite. The artistic portrayals of animals on obsolete paper money are exquisite – even the crude portrayals are beautiful in their own way. Horses, stags, ducks, dogs, cattle, buffalo, eagles, frogs, even polar bears, dragons, owls, and whales can be found on these pieces of paper.

A collector could make an endless journey attempting to gather all the different animals found on obsolete paper money. The “cross-eyed buffalo” being my favorite, perhaps I will make a start with him. Who knows then where I’ll go?