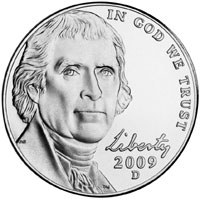 Will the increased cost of base metals finally bring about a change to the composition of coins? President Obama’s recently submitted 2011 Budget includes a proposal to allow the United States Mint greater flexibility in the material composition of coins for the purpose of reducing production costs.

Since 2006, it has cost the US Mint more than face value to produce and distribute the penny and nickel. This has led many to debate the merits of eliminating the lower denominations or at least altering the compositions.

In 2008 a bill was introduced known as the Coin Modernization and Taxpayer Savings Act of 2008. This bill had proposed changing the composition of the cent to steel, although it would be treated to impart a copper color. The bill would have also provided the Secretary of the Treasury with authority to change the metallic content of the five cent coin. This bill was passed in the House, but never voted on in the Senate.

The 2011 Budget revives the issue and expands the scope to include the dime, quarter, and half dollar, in addition to the penny and nickel. The Department of the Treasury would have authorization to approve alternative weights and compositions for any of these five denominations.

Based on information in the United State Mint’s 2009 Annual Report, the cost of the penny for the most recent fiscal year was 1.62 cents and the cost of the nickel was 5.79 cents. The annual loss for these two denominations was $22 million.

See related story: US Mint Cost to Produce the Penny and Nickel

The cost of producing the other denominations remained below their respective face values. Across all circulating coin denominations, the US Mint earned $427.8 million in seigniorage on $777.6 million worth of coins shipped to Federal Reserve Banks.

Rather than prescribing specific compositional changes, the 2011 Budget provides the Department of the Treasury with greater flexibility in the composition of coinage.

The Budget enables the Department of the Treasury to explore, analyze, and approve new, less expensive materials for all circulating coins based on factors that will result in the highest quality of coin production at the most cost-effective price. Such factors may include physical, chemical, metallurgical and technical characteristics; material, fabrication, minting, and distribution costs; materials availability and sources of raw materials; durability; effects on sorting, handling, packaging and vending machines; and resistance to counterfeiting.

According to the budget, the use of alternative materials could save $150 million annually after an initial period of development and capital adjustments. At this point, the budget still remains a proposal. The budget and this section may undergo changes before being approved by Congress.