(Atlanta, Georgia) — Four award-winning numismatic authors will appear as guest speakers at the Pennsylvania Association of Numismatists Fall Coin Show, Thursday through Saturday, October 27–29, 2016. Clifford Mishler, Douglas Mudd, and Dennis Tucker are featured in the PAN Lecture Series, a free program starting Friday at 1:00 p.m. In addition, John Mercanti will speak at a dinner Friday evening. The show will be held at the Monroeville Convention Center outside Pittsburgh. 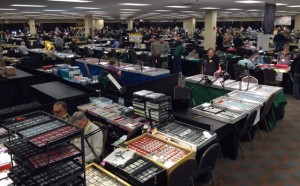 John Mercanti, retired chief engraver of the United States Mint, is the author of American Silver Eagles: A Guide to the U.S. Bullion Coin Program, recently released in its third edition to celebrate the 30th anniversary of American bullion coinage. In addition to dozens of other coins and medals, Mercanti designed the reverse of the American Silver Eagle. He will be on the bourse Friday, October 28, to autograph copies of his book. He will also be the featured speaker at the PAN banquet Friday evening at the LeMont Restaurant, a Five-Diamond venue overlooking Pittsburgh’s skyline.

Lecture Series speaker Clifford Mishler is the retired CEO of Krause Publications, a leading publishing firm in antiques and collectibles. He has written and edited numerous standard references and other books during his long professional career. His most recent book for Whitman Publishing is Coins: Questions & Answers, now in its fifth edition. Mishler will discuss “Numismatic Publishing: Past, Present, and Prognostication.”

Speaker Dennis Tucker has been the publisher at Whitman Publishing since 2004. He serves as the numismatic specialist of the U.S. Treasury’s eleven-member Citizens Coinage Advisory Committee. Tucker is the author of the best-selling American Gold and Silver: U.S. Mint Collector and Investor Coins and Medals, Bicentennial to Date. He will speak on “Hidden Profits in Modern U.S. Mint Silver and Gold Medals.”

Speaker Douglas Mudd, curator and museum director of the American Numismatic Association’s Edward C. Rochette Money Museum in Colorado Springs, served as manager of the Smithsonian’s National Numismatic Collection from 1991 to 2004. He is a published author, most recently of All the Money in the World. Mudd will discuss “The Olympic Games: History and Numismatics.”

More details about the show can be found online at www.PANcoins.org.