Today the U.S. Mint began taking orders for the 2016 Betty Ford First Spouse Gold Proof and Uncirculated Coins. The issues have a combined mintage limit of 10,000 pieces, and there is no household order limit in place.

The launch of the Betty Ford First Spouse coins comes after the release of the 2016 Gerald R. Ford Presidential dollar, which debuted on March 8. The Ford coins are the second pair of First Spouse issues released this year, following February’s Nixon releases. The final coins in the First Spouse series will feature Nancy Reagan and are due for release this summer.

The costs of all available First Spouse coins are currently set at $815.00 for Proof versions and $795.00 for Uncirculated issues. Prices may be adjusted in accordance with the the changing market value of gold, per the Mint’s pricing chart for products containing precious metals. The current prices will stay in effect as long as the value of an ounce of gold stays between $1,200.00 and $1,249.99. 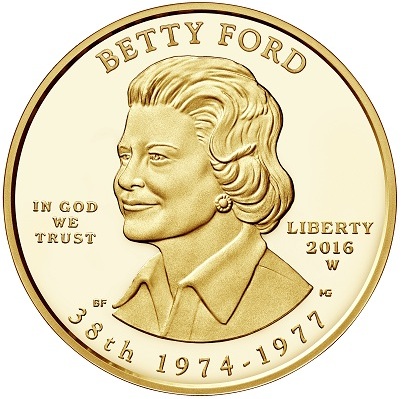 The obverse of the Betty Ford coin bears an image of Mrs. Ford with the inscriptions BETTY FORD, IN GOD WE TRUST, LIBERTY, 2016, 38th, and the dates of her time in the White House, 1974-1977, included in the field near the rim. The West Point Mint’s “W” mint mark is also included below the year. This side of the coin was designed by Barbara Fox and sculpted by Michael Gaudioso. 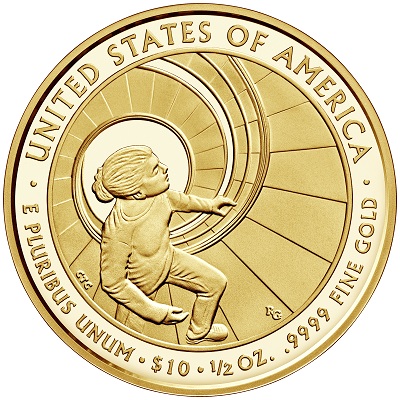 The reverse, designed by Chris Costello and sculpted by Renata Gordon, features an image of a young woman climbing a staircase, symbolizing Mrs. Ford’s “openness and advocacy regarding addiction, breast cancer awareness, and the rights of women,” according to a press release. The inscriptions UNITED STATES OF AMERICA, E PLURIBUS UNUM, $10, 1/2 OZ., and .9999 FINE GOLD are included along the rim.