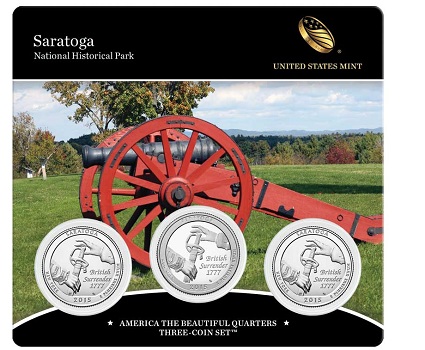 On December 1, the U.S. Mint released the 2015 Saratoga National Historical Park Quarter 3-Coin Set. The set includes two Uncirculated quarters respectively minted at the Philadelphia and Denver Mints, as well as a Proof quarter struck at the San Francisco Mint. There are no production limits listed for this item, which retails for $9.95.

The reverse of the Saratoga National Historic Park quarter features a depiction of British General John Burgoyne’s surrender to American General Horatio Gates at the Battle of Saratoga in the fall of 1777. The victory is remembered as a turning point in the Revolutionary War, giving the Americans critical momentum in their battle for Independence. Inscribed in the field beside the image is BRITISH SURRENDER 1777, with SARATOGA, NEW YORK, 2015, and E PLURIBUS UNUM placed along the rim.

The obverse features John Flanagan’s portrait of George Washington, with the inscriptions UNITED STATES OF AMERICA, LIBERTY, IN GOD WE TRUST, QUARTER DOLLAR, and a mint mark. The coins come in a protective plastic container that bears an image of the park and a certificate of authenticity.

The Saratoga quarter is the final America the Beautiful release of 2015. The next issue in the ATB series will be the Shawnee National Forest quarter, which has its launch event scheduled for Thursday, February 4, at Southeastern Illinois College in Harrisburg, Illinois.