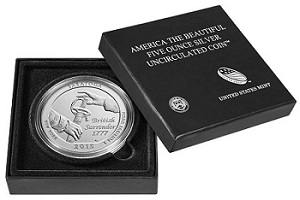 Today, December 3, the U.S. Mint released the 2015 Saratoga National Historical Park 5 oz. Uncirculated Coin, which is composed of five ounces of 99.9% silver and costs $149.95. It measures 3 inches in diameter and is .165 inches thick. This issue also carries the Philadelphia Mint’s “P” mint mark and an Uncirculated finish, differentiating it from the bullion version of the coin.

The obverse shares its design with other coins in the America the Beautiful series, which feature John Flanagan’s portrait of George Washington with the inscriptions UNITED STATES OF AMERICA, LIBERTY, IN GOD WE TRUST, QUARTER DOLLAR, and a mint mark.

The reverse of the quarter features a depiction of British General John Burgoyne’s surrender to American General Horatio Gates at the Battle of Saratoga in the fall of 1777. Inscribed in the field beside the image is BRITISH SURRENDER 1777, with SARATOGA, NEW YORK, 2015, and E PLURIBUS UNUM placed along the rim. 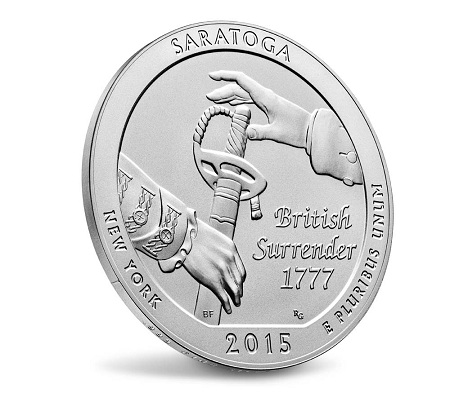 As noted on Mint News Blog, this issue will be limited to a maximum of 20,000 pieces, despite its listed mintage limit of 30,000. This is because the Mint has already sold 45,000 bullion issues of this coin, and the maximum total mintage across bullion and Uncirculated issues is 65,000. The other four 2015 ATB 5 oz. Uncirculated releases have each sold between 16,219 and 20,112 units so far.