The Royal Canadian Mint have launched (27th October) their latest Gold crown within the Bi-annual “Coat of Arms” series. The eighth issue, this double Gold Crown features Canada’s oldest coat of arms, that of Nova Scotia. 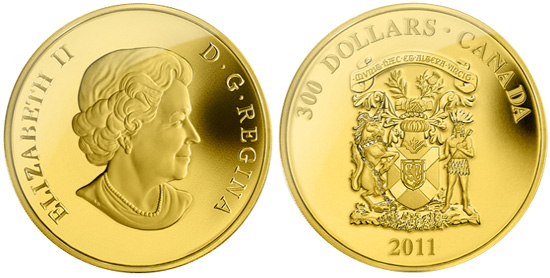 One of the Maritime Provinces, Nova Scotia was granted its own coat of Arms by H.M. King Charles in 1625 which reflected the population of settlers who were mainly from Scotland, one of Canada’s founding cultures. The Cross of St. Andrew features on the actual shield, the royal lion and crowned unicorn from the Royal Arms of Scotland are also prominent along with a thistle and a laurel sprig. Many believe the armoured hand symbolizes protection under the king himself while the bare hand foretells the challenges to be met colonizing Nova Scotia. The Aboriginal man to the right of the shield represents the province’s first native peoples. The motto above reads “MUNIT HAEC ET ALTERA VINCIT” (One defends and the other conquers). These Arms fell out of use when Nova Scotia joined Confederation in 1867, but were reinstated in 1929.

The obverse of the coin includes Canada’s own effigy of H.M. Queen Elizabeth II in use on circulation and commemorative coins since 2003. The reverse depicts a rendition of the reinstated version of the coat of arms along with the coin’s denomination of 300 Dollars and the year of issue, 2011.

This impressive coin is struck in .583 fine gold (14 ct) with a weight of 60 grams and a diameter of 50 mm. Struck to proof quality, the mintage of this coin is limited to just 500 pieces. Shipment of this coin will commence from the 1st November.

For more information on this and other coins offered by the Royal Canadian Mint, please visit their website at: http://www.mint.ca/store/product/product.jsp?itemId=prod1190001