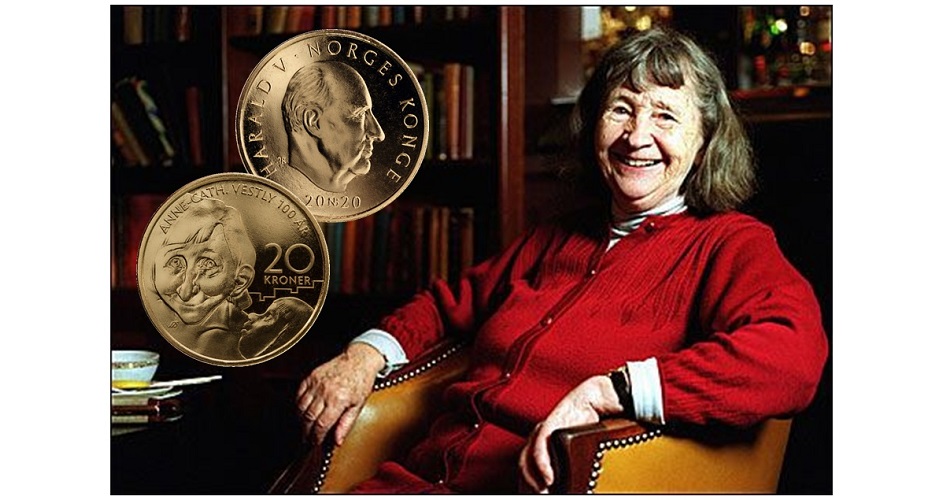 The Norges Bank has issued 20-kronor (USD 2.20) commemorative circulation quality coins to mark the 100th anniversary of the birth of the eminent author Anne-Cath Vestly, who was born on the 15th February 1920. A popular and honoured artist in her native Norway, Vestly’s picture books were aimed primarily at a young audience and have been translated and published in a host of European countries as well as the former Soviet Union.

Born Anne Catharina Schulerud in the village of Rena in Eastern Norway, her father was a pharmacist and owned a hardware store, while her mother was a school teacher. After graduating her studies, she studied acting at Studioteatret in Oslo and worked as an actress for five years. However, Vestly eventually decided that she would rather write and began to compose books for children. The first of her books was published in 1953, and her literary career spanned until 2004. Vestly’s most popular series of books focused on a grandmother who looked after and shared numerous adventures with a flock of eight children.

Through her writings and experiences as a young girl during and after World-War II, Vestly put into words what it was like for girls and boys to grow up in post-war Norway. Her approach to writing at a level for young people was regarded as not speaking down to her audience, which earned her a lot of admiration both in academic and psychological communities. Her best-known works in English-speaking countries is Eight Children and the Aurora series, which Vestly was praised for her warm humour, believable characters, and original treatment of everyday themes.

These series became wildly popular in her home country and abroad, which also included a 1977 a film adaptation of the Eight Children series entitled Mormor og de åtte ungene i byen (“Grandma and the eight kids in town”), with Vestly herself playing the role of the grandmother.

Among the many awards Vestly received during her lifetime was first the most prominent from Norway’ Ministry of Education in 1955. She received the Peer Gynt Prize in 1980 and the Save the Children-Rainbow Prize in 1989. Vestly was named a Knight of Honour by the Artists’ Association in 1991 and was created a Knight First Class of the Order of St. Olav by HM King Harald V in 1992. Anne-Cath Vestly died on the 15th December 2008, at the age of 88 years at her home in Mjøndalen, and was survived by her two sons Jo and Haakon Vestly. 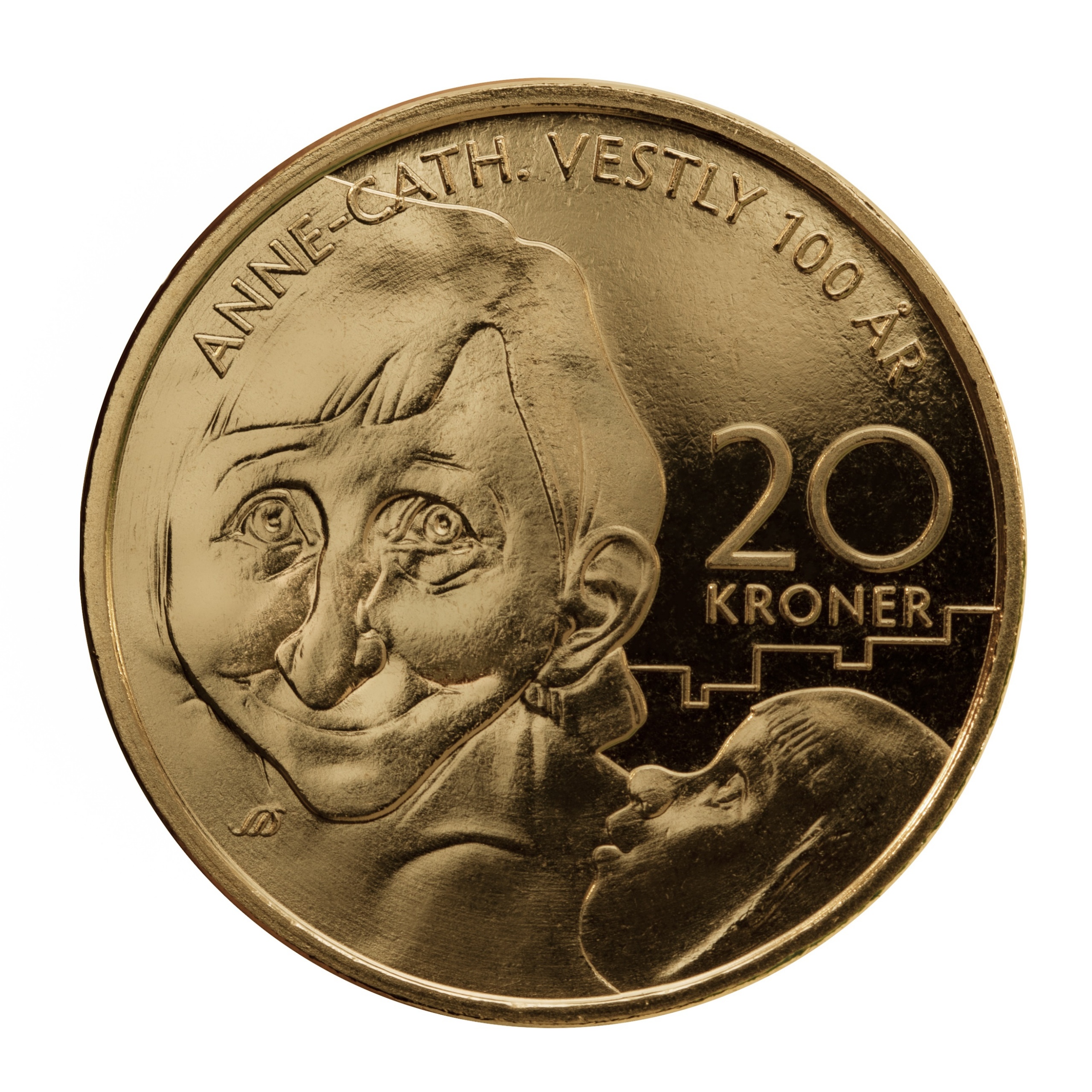 Det Norske Myntverket AS produces the anniversary coins — the Norwegian Mint at their facilities in Kongsberg and are designed by illustrator and newspaper cartoonist Siri Dokken. The motif shows Anne-Cath. Vestly as if she is looking directly at the viewer, creating an immediate contact. The design is inspired by the word “Listen,” which was synonymous with Vestly since she was often described as not addressing the child, but that she listens to the child and is in turn inspired by them. In the background is a “city skyline,” which is a reference to the damaged cities and towns which many children lived in after the Second World War. 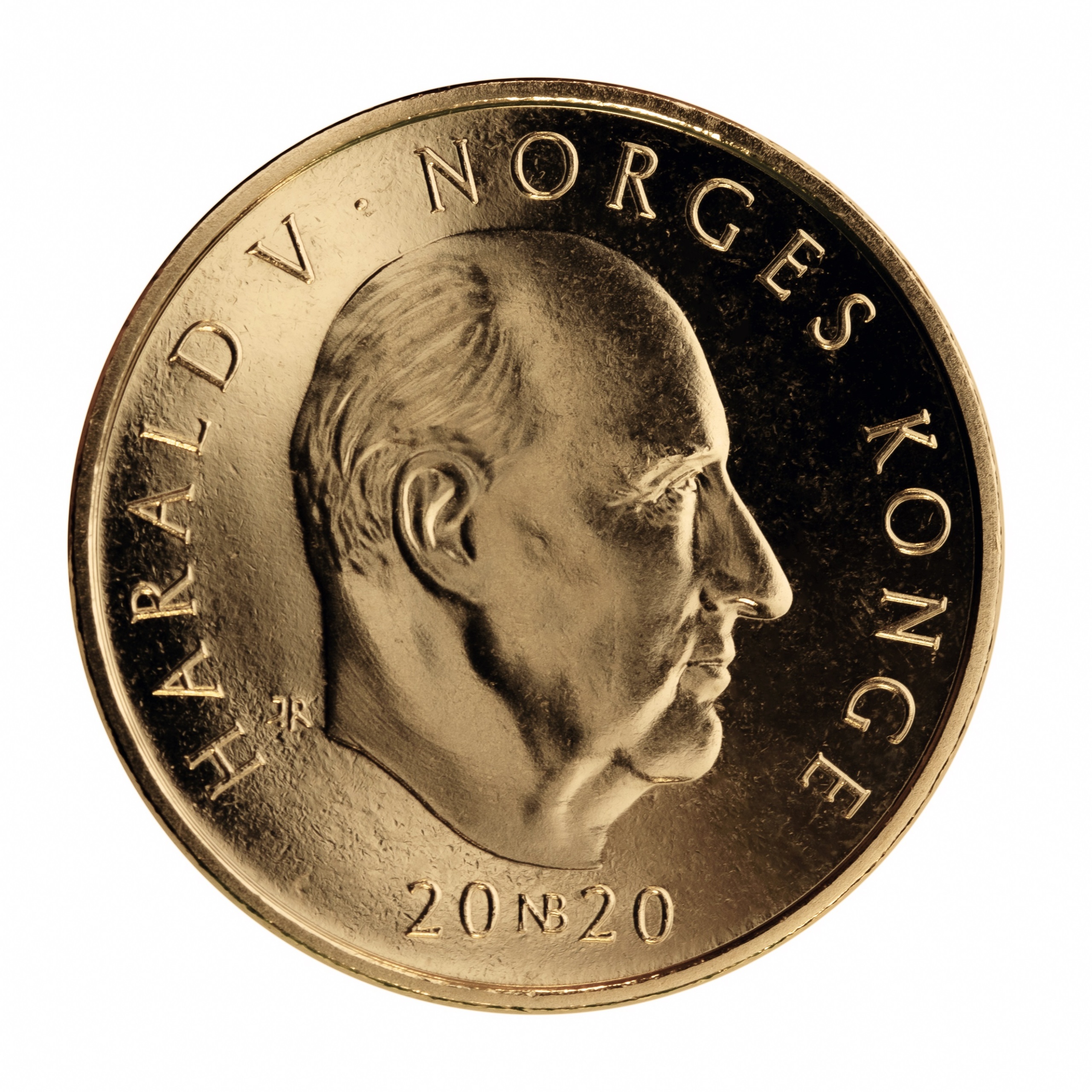 The obverse depicts an effigy of HM King Harald V that was designed by Ingrid Austlid Rise, a designer at the Norwegian Mint.

The commemorative coins replace the ordinary circulation type coins for 2020. A two-piece Proof set is available and is presented in a colourful folder that includes both the Vestly 20-kronor commemorative coin and the Norwegian Mint’s official annual medal in Proof plated with 99.9% pure gold honouring the 75th anniversary of the Liberation of Norway. For additional information, please visit the Norwegian Mint’s retail partner.