The United States Mint will officially launch the Northern Mariana Islands Quarter on December 10, 2009. The sixth and final quarter in the DC & US Territories Quarters Program was first released into circulation on November 30, 2009. For some coin releases, the official launch ceremony is held on a different date than the circulation release. 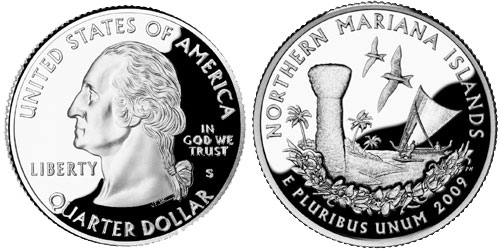 The Mistress of Ceremonies will be CNMI Quarter Commission member Catherine Perry Anderson. A free Northern Mariana Islands Quarter will be given to more than 1,000 children expected to attend the ceremony. Other attendees will have the opportunity to exchange currency for rolls of the new coins at face value.

On the evening before the launch, a public coin form will be held from 6:30 PM to 7:30 PM at American Memorial Park Visitor’s Center. The public and news media are invited to the forum where they can learn about US Mint coin programs and ask questions about future coinage.