The next commemorative half dollar to be discussed in our series is another 1936-dated coin. This one, however, was not authorized until mid 1937, even though it commemorated an event (two events actually) whose 300th and 200th anniversaries did take place in 1936. This might sound confusing, but it is another example how collectors were taken for their money through the issuance of commemorative coins in 1936 and 1937. The commemorative in question is the Norfolk Commemorative Half Dollar. It commemorated both the 300th anniversary of the original Norfolk, Virginia land grant and the 200th anniversary of the city of Norfolk as a borough. While both events were certainly of local importance it could hardly be considered of national importance let alone worthy of a commemorative issue, but this was exactly what happened, and the 1936 Norfolk Commemorative Half Dollar is now an integral part of American coinage.

Let’s start at the beginning. While Virginia is now mostly famous for Jamestown, the first permanent English settlement in what would become the United States it was only 15 years later that the first Englishman settled in the area that would later become the city of Norfolk. This person was Adam Thoroughgood of King’s Lynn, Norfolk, England who had become an indentured servant at the age of seventeen to pay for his fare to the United States. After his servitude ended he returned to England, and was granted a land grant in the colony of Virginia. He convinced 105 people to return to Virginia with him and settled along the Lynnhaven River. Thoroughgood named the new settlement after his hometown in England and the city would be known as Norfolk.

The issuance of the land grant was the first event commemorated on the Norfolk Commemorative Half Dollar. The second occurred exactly a century later, in 1736. Norfolk had been incorporated as a city in 1702 and in 1736 it became a borough. It was the last of a series of administrative changes that made the city as it still is today. Both events were considered worthy of a celebration, even though the coin commemorating both events would not be conceived and struck until a year later. The reason given to collectors was that a 1936 bill was unclear whether to strike a medal or a commemorative coin for the celebrations. If this was true remains unclear; most likely the issuance of a coin was hindsight and the party’s involved wanted to profit from the commemorative craze that continued into 1937.

The Act of June 28, 1937 authorized the issuance of up to 25,000 Norfolk Commemorative Half Dollars. Designed by the husband & wife team of William Marks Simpson and Marjorie Emory Simpson the coin’s design can be considered one of the filling of all designs ever placed on a United States coin. Not only are there five different dates on the coin (but none that indicate the year that the coins were actually struck), there are also a total of ten different legends, mottoes and the denomination. 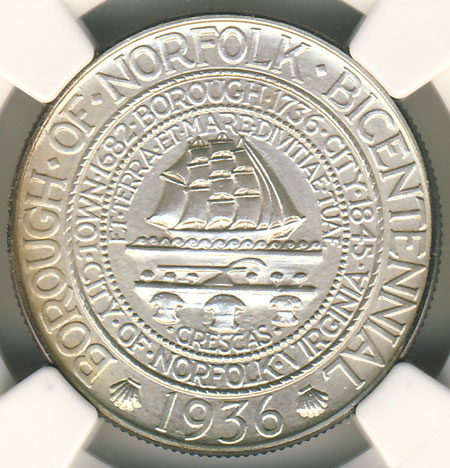 We’ll start at the center of the obverse, which features the seal of the City of Norfolk. A large three-master ship is seen above stylized waves. Under the waves is a plow, and below that are three sheaves of wheat, and under all this is the Latin word CRESCAS, which means as much as “Thou Shalt Grow”. This is the official motto of the City of Norfolk. Above the ship is another Latin Legend, ET TERRA ET MARE DIVITIAE, which is translated as “Both by Land and by Sea the Riches are” and appears in the city seal as well. An enclosed continuous border in which is placed the following legend encloses all this: “TOWN 1682 BOROUGH 1736 CITY 1845 CITY OF NORFOLK VIRGINA”. All this is enclosed by yet another circle, in which is placed “BOROUGH OF NORFOLK BICENTENNIAL”. The 1936 date of the celebrations already passed is seen at the bottom, enclosed by two scallop shells. 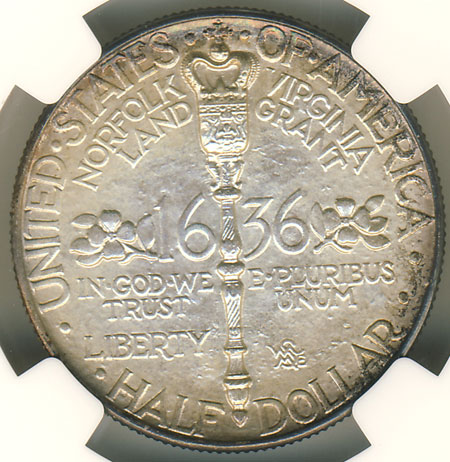 That’s just the obverse. The main design element on the reverse is the Royal Mace, with the British Crown on top. The 104 ounce silver mace is a traditional British piece of Royal Authority. Norfolk, Virginia was the only American city in colonial times that received such a mace and it is now considered to be an important part of the city’s history. The mace is flanked, near the center, by the date 16-36. To the left and right of the date are two sprigs of dogwood. Below the 16, on the left part are the mottoes IN GOD WE TRUST and LIBERTY. To the right, below 36 is E PLURIBUS UNUM and the designer’s initials, filling up what would have been just about the only empty space on the coin. At the upper part of the design is NORFOLK-VIRGINIA/LAND-GRANT placed in a curved way. All this is enclosed by UNITED STATES OF AMERICA / HALF DOLLAR, with large dots placed between the words. Finally, to top it all of, the empty spaces in the design have a somewhat rough look, making it almost impossible to find any plain fields as are so common on virtually all other coins.

Production of the commemorative started at the Philadelphia Mint in September of 1936, and 25,000 pieces were produced along with thirteen coins for assay purposes. The Norfolk Advertising Board and the Norfolk Association of Commerce sold the coins locally for $1.50 each. Mail orders were also accepted, with the first coin costing the collector $1.65 and each one after that $1.55. The coins were mailed in leaflets highlighting the history of the city and the coin’s design. Total sales were less than the total number authorized, and a total of 8,077 coins were later returned to the Philadelphia Mint and melted. This leaves a net mintage of 16,923 coins.

For collectors, the busy design has given them something not easily found with many other commemoratives: hits and other flaws are easily hidden, and high-grade pieces up to the MS-68 grade level are relatively easy to find. Even if there are marks on a coin it would take almost a microscope to notice them in this design. As a result there is vary little difference in value between circulated pieces (which are rare) and MS-67 graded pieces, which cost less than $500. Both PCGS and NGC have graded hundreds of pieces MS-68, which are very appealing and often come spectacularly toned (a result of the leaflets in which they were mailed). Both PCGS and NGC have each graded a single example as high as MS-69, which even in the commemorative series is a true rarity.