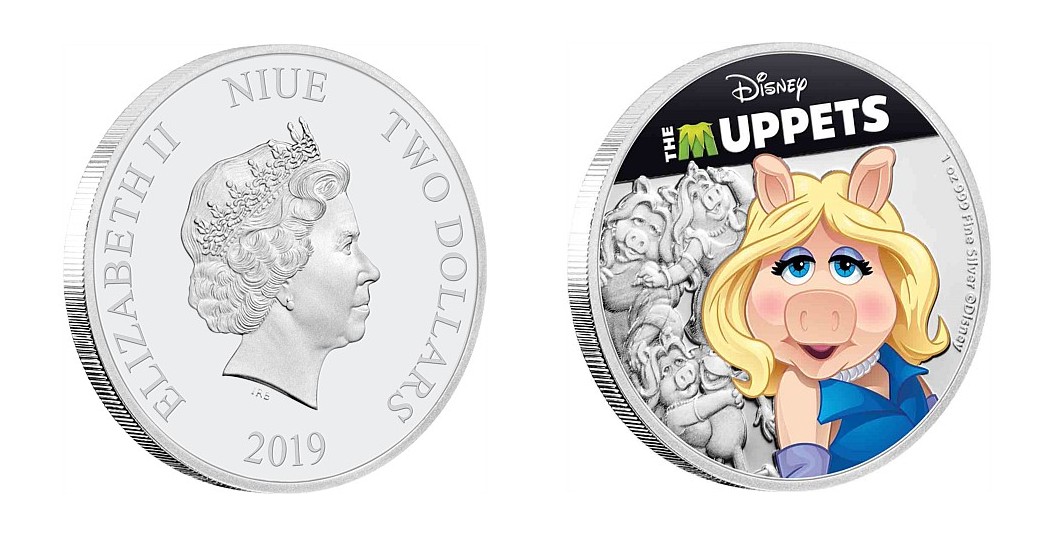 The government and treasury of Niue have launched (6th August) new silver Proof and colour collector coins which feature one of the puppetry world’s most well-known and glamorous figures: The indomitable Miss Piggy.

She joins other familiar Muppets characters in the series, from Fozzie Bear to Kermit the Frog, and now it’s Miss Piggy’s turn to turn heads and “wow” her adoring public. Also a creation of Muppets inventor Jim Henson (1936 – 1990), the character made her television debut initially in 1974 alongside the famed trumpeter Herb Alpert and the TJB. She would later join the other well-known characters on the Muppet Show which ran from 1976 until 1981 with a worldwide audience.

The inspiration, in terms of her long blonde hair and sultry manner, was suspected to be the singer Peggy Lee. However, this connection was confirmed with The Muppet Show episode 106, and Piggy is referred to by her full name “Piggy Lee.” Her primary belief is that she is convinced she is destined for stardom, and nothing will stand in her way. She has a capricious nature, at times determined to convey an image of feminine charm, but suddenly flying into a violent rage, accompanied by her trademark karate chop and “hi-yah!” shout. Whenever she thinks someone has insulted or thwarted her, watch out, for Miss Piggy has something of a stony-faced glare which she will aim the victim’s way. Kermit the Frog, Piggy’s love interest, has learned this all too well. When she isn’t smothering him in kisses, she’s sending him flying through the air with a karate chop. It was confirmed in 2015 by the creators of the Muppets that the unthinkable had indeed happened: Kermit and Piggy did indeed break-up, not dissimilar to the famed Brad and Angelina split. Her career is diverse, and she even appeared on the silver screen in all the Muppet films and television series following The Muppet Show.

The coins are produced by the New Zealand Mint at their facilities in Auckland, on behalf of the treasury of Niue. The reverse side of the silver Proof and colour coin includes a depiction of Miss Piggy “striking a pose,” while additional images of her and Kermit the Frog are part of the background and relief imagery. Above the primary design is a banner with the Muppet’s logo that also includes the Disney logo. The obverse side includes an effigy of HM Queen Elizabeth II created by sculptor Ian Rank-Broadley. The denomination of TWO DOLLARS and the issuing authority of NIUE are seen in the legend surrounding the Queen’s likeness with the year of issue, 2019, placed below.

Each coin is encased in a square-shaped Perspex or lucite container which frames and houses the coin, allowing for easy display of both sides. The packaging contains a uniquely numbered certificate of authenticity, and the outer box has been designed to complement the Muppets series and theme. For additional information about this coin and others issued by the treasury of Niue, please visit the website of the New Zealand Mint.