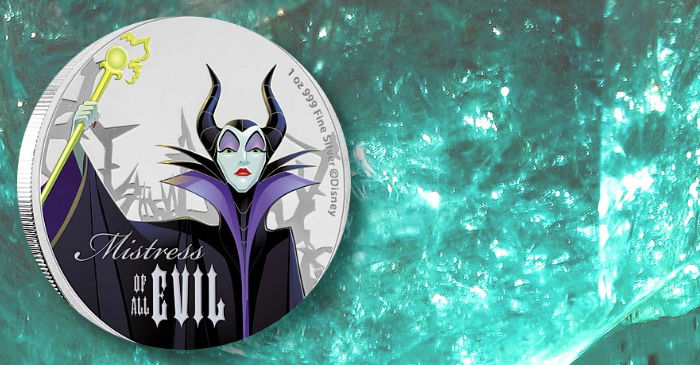 The government and treasury of the island of Niue have issued (25th July) the second coin which is part of their ongoing series entitled “Disney Villains.” The numismatic series highlights the villains who test the strength and fortitude of the heroes featured in the charming and beloved Disney full-length animated movies. The second coin in the series features the diabolically devious, Maleficent, who is one of Disney’s most iconic villains seen in the animated film Sleeping Beauty, first released by Disney Studios in 1959.

In a first for a Disney villain, Maleficent was also featured in her own Disney live-action film entitled Maleficent, which was released in 2014.

According to the story, Maleficent cruelly places an irrevocable curse upon Princess Aurora which will cause a deep sleep. The story was written by Charles Perrault (1628–1703) and formed part of his works published in 1697 entitled Histoires ou contes du temps passé or Les Contes de ma Mère l’Oye (Stories or Fairy Tales from Past Times with Morals or Mother Goose Tales.)

In the 1959 animated version of the story released by Walt Disney Studios, she is responsible for all misfortune in neighbouring King Stefan’s realm, having taken offense at not being invited to the christening of Princess Aurora. Maleficent attempts revenge on King Stefan and the queen by placing their newborn daughter under a curse:

Aurora will grow in grace and beauty, but before the sun sets on her 16th birthday, she will use her finger to touch the spindle of a spinning wheel and die. . .

According to the curse, Aurora is destined to die on her 16th birthday, but with the help of her three guardian fairies, she will only fall into a deep sleep. The curse can be ended with a kiss from her betrothed, Prince Phillip. As King Stefan remains fearful for his daughter’s life, he orders all spinning wheels in the kingdom to be burned. The three guardian fairies do not believe that his actions will be enough to keep Aurora safe, and spirit her away to a woodcutter’s cottage in the forest until the day of her 16th birthday. Years later, Aurora emerges as a young girl renamed Briar Rose, who has grown into a beautiful young woman. On the day of her 16th birthday, she coincidentally attracts the attention of Prince Phillip, now a handsome young man, and both instantly fall in love, unaware that each was once betrothed to the other.

Briar Rose is thrilled to tell her guardian fairies she met a man and fell in love. Unaware that the young man is in fact her Prince Philip, they tell Aurora the truth about her royal heritage. Telling her she must never see the man she met again, Aurora is heartbroken while Phillip tells his father of a peasant girl he met and wishes to marry in spite of his prearranged marriage to Princess Aurora. King Hubert tells his son such a marriage could never happen, leaving Philip in equal disappointment. Later that night, the fairies take Aurora back to the castle and leave her alone in a room to wait for her birthday celebrations and to once again see her parents. Maleficent then appears and magically lures Aurora away from the fairies, eventually tricking the princess into touching the spindle of an enchanted spinning wheel where Aurora pricks her finger, completing the curse.

As a means to prevent the prince from ever rescuing Aurora, Maleficent kidnaps and imprisons Prince Philip. The good fairies are the last hope to free Phillip so that he can awaken Aurora. They find and release the prince, arming him with the magical Sword of Truth and the Shield of Virtue. Maleficent tries to stop Phillip by surrounding Aurora’s castle with thorns, but when this move fails, she then transforms into a gigantic dragon. Encircling the castle to thwart his attempts to rescue the princess, eventually, Phillip throws the sword blessed by the fairies’ magic directly into Maleficent’s heart, causing her to fall to her death. At last, Phillip awakens Aurora with a kiss, breaking the spell and thereby waking everyone in the palace. As Aurora is happily reunited with her parents, the royal couple descends to the ballroom where they meet Prince Philip’s father King Hubert, who is confused about how the two young people met in the first place. Two of Princess Aurora’s guardian fairies initiate an argument over the colour of Aurora’s ball gown, magically changing it from blue to pink while the happy couple waltzes. The scene then fades to Aurora and Philip dancing on a cloud. 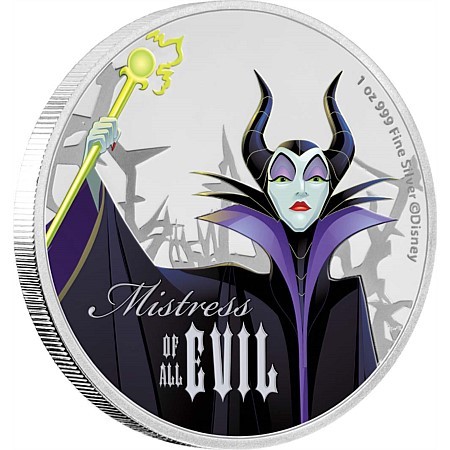 The coin is produced by the New Zealand Mint at their facilities in Auckland on behalf of the treasury of Niue. The reverse of the coin features a full-colour image of Maleficent who is depicted against an engraved background and is accompanied by the phrase, Mistress of all Evil, seen in a variety of stylised scripts. 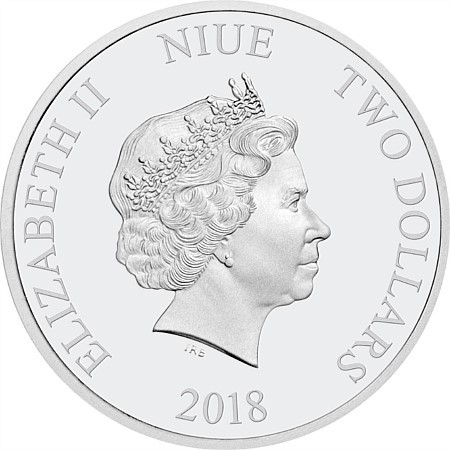 The obverse includes the Ian Rank-Broadley effigy of HM Queen Elizabeth II. The legend around the coin includes ELIZABETH II NIUE TWO DOLLARS, which are the issuing authority and the coin’s denomination, respectively. The year of issue, 2018, is placed below the Queen’s effigy. 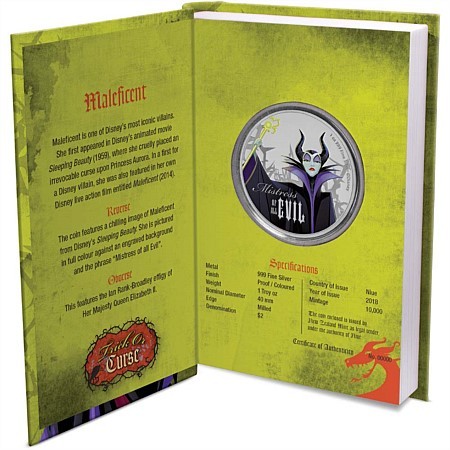 The encapsulated coins are presented in complementary, fairy-tale hardcover book-style packaging. The design on the coin case is in keeping with the Disney Villains theme, while the certificate of authenticity is printed alongside the coin. It is expected that there will be two more Disney Villains featured in this series, which will be issued either this year or in 2019. For additional information about this coin and other coins issued by the treasury of Niue, please visit the website of the New Zealand Mint.