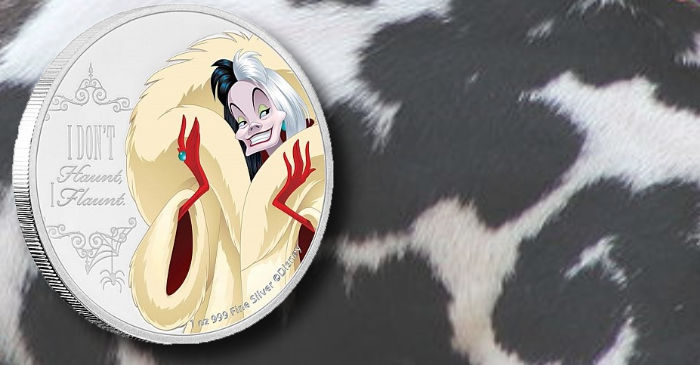 The government and treasury of Niue have issued (1st October) the third coin which is part of their ongoing series entitled “Disney Villains,” who are the characters in the many animated Disney feature films you would most likely not want to encounter. The numismatic series highlights the villains who test the strength and fortitude of the heroes featured in the charming and beloved full-length movies — with the third character featured being the ruthless Cruella de Vil, an enigmatic villain who appeared in the classic film 101 Dalmatians, which made its debut in 1961.

Longing to make coats of dalmatian puppy fur, Cruella arranges to have the puppies stolen and taken to her sinister-looking home, Hell Hall, to await their fate. It all begins with the handsome dalmatian Pongo, who becomes tired of his bachelor-dog life while living a carefree life in London with his human friend and master Roger. One day, he spies the lovely Perdita and maneuvers Roger into meeting Perdita’s owner and fellow human friend, Anita. As it happens, the two dog lovers themselves subsequently fall in love and marry, which also unites Pongo and Perdita too. After Pongo and Perdita become proud parents to a litter of 15 puppies, Anita’s old wealthy, but wicked former school friend Cruella de Vil appears on the scene and curiously declares that she wants to buy them all. Roger, sensing something afoot, declines her offer, and as a result, Cruella hires the criminals Horace and Jasper Badun to steal them — all because she covets a fur coat she wishes to make from the dalmatians.

The puppies are “dog-napped” and brought to her crumbling estate in the country, where 84 other dalmatians are also being held captive, and with Pongo and Perdita’s 15 puppies, Cruella has her requisite 99 dalmatians. All attempts by the police to find the missing puppies fail, so the desperate Pongo and Perdita appeal to the dogs of London, via the “twilight bark.” Led by the Colonel, an indomitable shaggy dog, and a cat named Sergeant Tibbs, all dogdom comes together in an all-out effort to rescue the puppies, and, aided by geese, cows, and horses, they track down the missing puppies.

Pongo and Perdita arrive in the mansion and distract the two Badun brothers long enough for the puppies to escape to the shed where Captain, the Colonel, and Tibbs live. Pongo decides that the 84 extra puppies will go with them as well as they head back to London. After spending the night in the barn, a friendly labrador, who is aware of their plight (thanks to the “twilight bark”), explains that a moving truck in the area is heading back to London and that they can all sneak aboard. However, just after they arrive, Cruella and the crooks arrive, certain the dogs are in the shed. Watching two of the puppies playing in some soot, Pongo decides that they’ll all roll in the soot, making them look like labradors and disguising their spots. However, one puppy gets covered with snow and becomes un-sooted. Pongo manages to get the last puppy on the truck before it starts up, with Cruella and the crooks giving chase.

Trying to force the truck off the road, Cruella veers off the road and into a ravine. But the chase doesn’t end there, as she maneuvers the car back up onto the road, she fiercely tries to stop the truck, eventually getting caught in its bumper. As Cruella is careening behind the truck in an effort to get it to flip over, she finally meets her own end when Horace and Jasper collide with her destroying both her car and their van — ending the chase.

With both Roger and Anita in London, they are preparing for Christmas, though lamenting the loss of their beloved pets. However, a knock on the front door is heard, and to their utter delight, they find Pongo, Perdita, and all 99 puppies safe and sound. Roger is overjoyed, and much to Anita’s worry, decides to keep them all with plans to move to the country and start a dalmatian plantation. 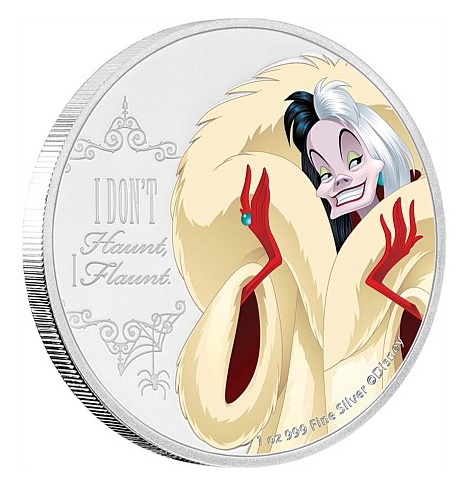 The coin is produced by the New Zealand Mint at their facilities in Auckland on behalf of the treasury of Niue. The reverse side of the coin features a full-colour image of the aptly named Cruella de Vil seen in her inimitable style. The quote I DON’T Haunt, I Flaunt is engraved as part of the design and placed to the left of a full-colour depiction of Cruella. 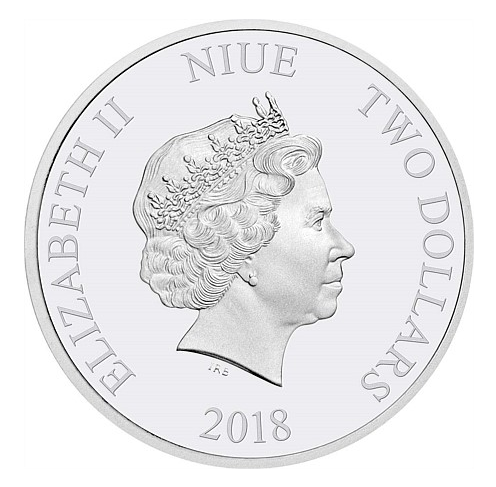 The obverse side includes the Ian Rank-Broadley effigy of HM Queen Elizabeth II. The legend around the coin includes the text ELIZABETH II, NIUE, TWO DOLLARS. The year of issue, 2018, is placed below the Queen’s effigy. 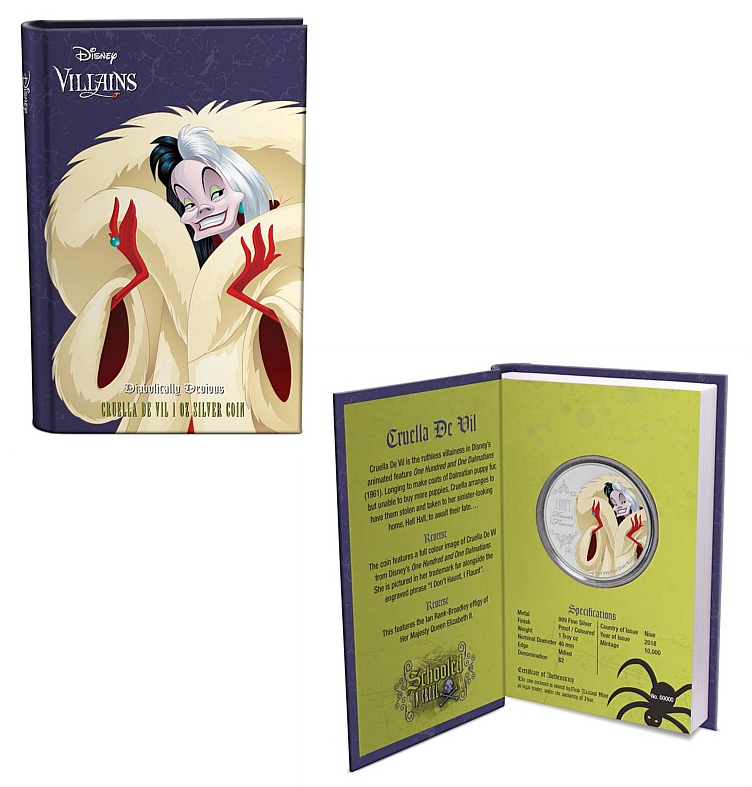 The encapsulated coins are presented in complementary fairy tale hardcover book-style packaging, and the design on the coin case keeps with the Disney Villains theme. The certificate of authenticity is printed alongside the coin. One more Disney Villains in the series is expected to be issued either by the year’s end or early in 2019. For additional information about this coin and others issued by the treasury of Niue, please visit the website of the New Zealand Mint.