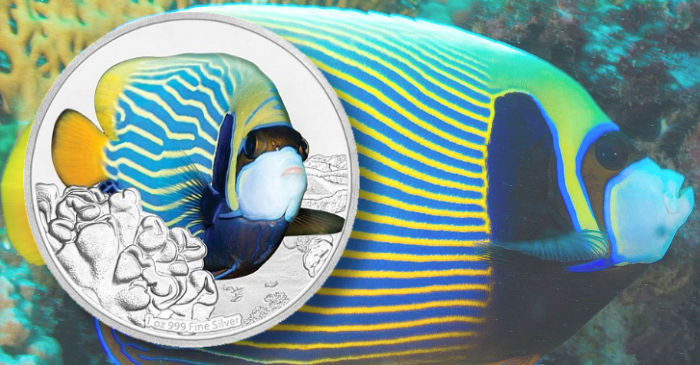 The treasury of the South Pacific Island Nation of Niue has released their second coin which is part of a new series entitled “Reef Fish.” The series features some of the marine life prevalent in and around the Pacific Ocean. The second coin highlights another very colourful inhabitant of the local waters, the emperor angelfish. Well known for its bright colours and patterns, the emperor angelfish, or Pomacanthus imperator, is typically found in shallow reefs.

Despite the fact that the name “angelfish” is shared by both freshwater and marine species, there are many different kinds of angelfish and they come in all shapes, sizes, and colours. Scientists have deduced that this species of fish were all originally a silver colour, however, selective breeding has created many varieties from blue to zebra-striped — and everything in the middle.

This particular species is incredibly colourful with vivid markings and a bold, blue body covered with bright yellow horizontal stripes, culminating in a bright yellow to orange caudal fin. A striking blue-black mask covers the eyes and a similarly coloured vertical band extends from the pectoral fin two-thirds of the way up the body. This band is highlighted in sapphire-blue in front, and bright yellow caudally, with the mouth and surrounding region usually being white in colour. These colourful fish can be found anywhere from the East and West Indian Ocean to the waters of Australia and north to Japan. Curiously, this species is classified as “hermaphroditic,” meaning that it is capable of changing gender under specific conditions when a male is needed. This means that a female can change gender and take on the role of a male for the purpose of breeding. Emperor angelfish are carnivorous and prey upon invertebrates mostly, such as shrimp, worms, and insects — but seem to also dine on vegetative material such as marine algae or bits of seaweed. The emperor angelfish, when fully grown, can reach a maximum length of 40.0 centremetres (15.7 inches), and when they are young, these fish are black with white and blue markings — eventually growing into their remarkable colour markings. It is because of their beautiful colours that this specific breed of fish is highly sought after for aquariums and other places where aquatic displays are required. 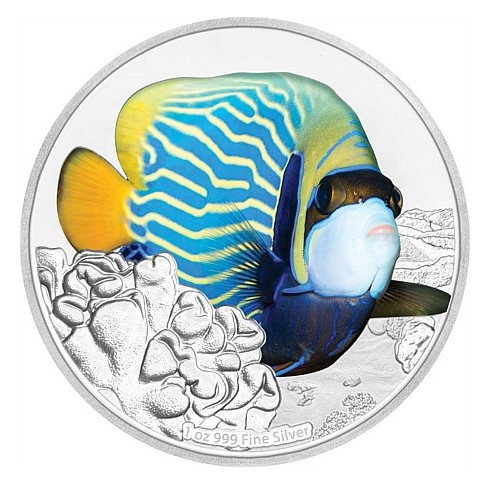 The coins are produced by the New Zealand Mint at their facilities in Auckland, on behalf of the treasury of Niue. The reverse side of the silver coin features an exquisitely coloured emperor angelfish peeking out from amongst engraved coral in its native reef habitat. The design also incorporates an ultra-gloss effect to give the featured design of the emperor angelfish a unique “wet” look. 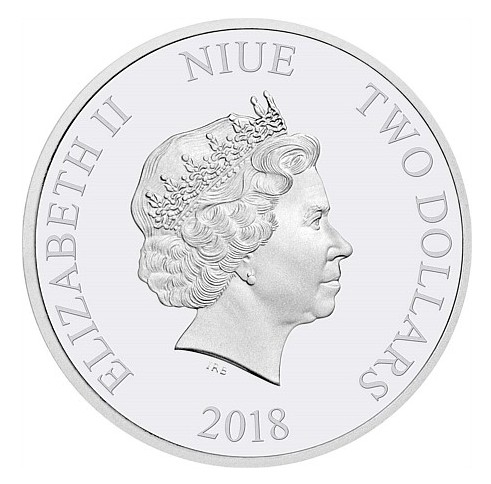 The obverse side includes an effigy of HM Queen Elizabeth II created by sculptor Ian Rank-Broadley. The denomination of TWO DOLLARS and the issuing authority of NIUE are seen in the legend surrounding the Queen’s likeness. 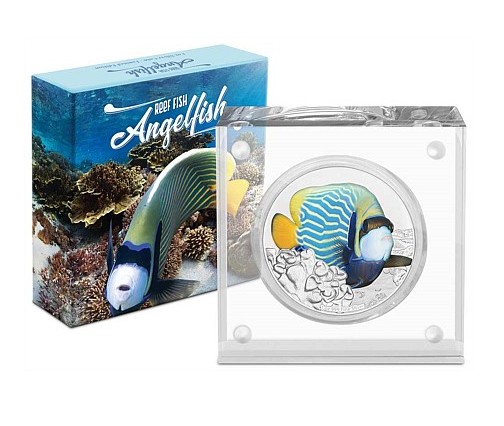 Each coin is encased in an innovative Perspex or lucite container in the shape of a block which frames the coin and allows for easy display. The packaging contains a uniquely numbered certificate of authenticity and the outer box has been designed to complement the Reef Fish series and theme. For additional information about this coin and others issued by the treasury of Niue, please visit the website of the New Zealand Mint.