The Mint of Poland, on behalf of Niue Island, has produced the first coin in a new series, Artificial Intelligence. The 99.9% fine silver coin, named Code of the Future, combines the well-known 1’s and 0’s of binary code with familiar motifs from the greatest science-fiction movies and adds selectively applied, fluorescent coloring to produce an otherworldly effect. 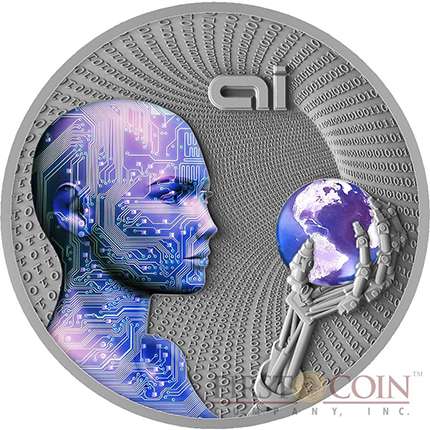 On the reverse of the coin, a female android in eerie, glowing blue contemplates the planet Earth in the palm of her hand—or rather, its armature. The android’s articulated finger bones strongly resemble the denuded digits of the original Terminator, as played by Arnold Schwarzenegger. In the background a stream of 1’s and 0’s flows into a curving tunnel, as if into a wormhole. Above the android are the lowercase initials “ai,” representing the name of the series. 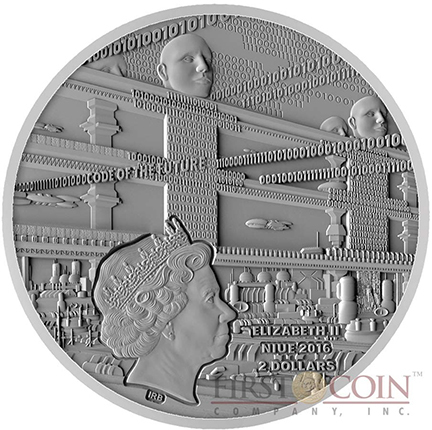 On the obverse, the 1’s and 0’s stream through the air in a cityscape—or is it a massive factory?—reminiscent of Blade Runner. At the top of massive columns are perched giant bald heads; in the background, tiny spaceships cruise at high altitude. On the ground, a series of strange machines suggest a machine room or factory with a strange, unknown purpose. We are reminded that this is a coin by a small, off-center profile portrait of Queen Elizabeth II, designed by Ian Rank-Broadley. To her right, in three lines, are the legend, date, and denomination: ELIZABETH II / NIUE 2016 / 2 DOLLARS. The words CODE OF THE FUTURE stream through the air above the portrait’s head, almost hidden within the code itself.

Given the approaching Christmas season, this luminous collector coin would be an ideal gift for a science-fiction enthusiast, gamer, or cosplayer.

Specifications for this limited-mintage coin are as follows:

The Artificial Intelligence $2 silver coin can be ordered from First Coin Company for $226.90. International shipping is free.

Fond of Niue Island issues? Check out these glimmering offerings at APMEX.
Share: