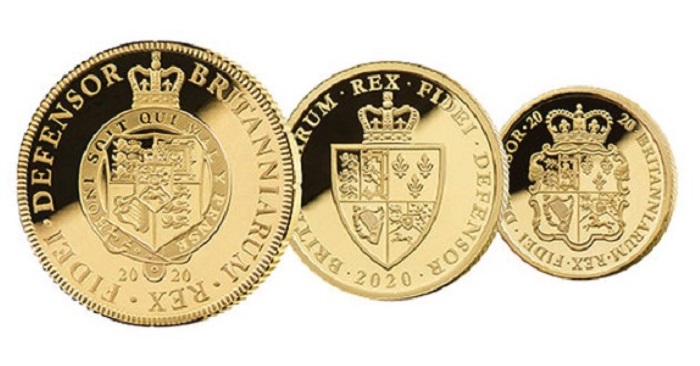 The East India Company Bullion Ltd, a subsidiary of the East India Company, in partnership with the treasury of the government of St. Helena, have released 2020-dated gold Proof guinea coins in remembrance of the end of the reign of King George III. The new collector’s gold guinea 2020-dated Proof quality coins are issued in three historic denominations associated with the guinea gold coin, that of 1, 1/2, and 1/4 guineas, and feature classic reverse motifs used on one-guinea coins during the reign of King George III. 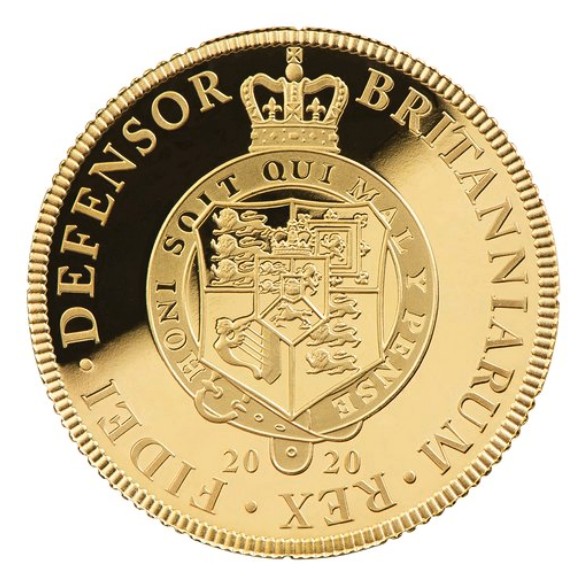 With reverse designs skillfully recreated and minted to the exact specifications of the last guineas produced, the one guinea (£1) denomination features the famous military design minted for only one year in 1813 and is considered one of the rarest guineas. Minted specifically to assist the Duke of Wellington in his search for Napoleon, the last guinea coins ever to be issued became known as the military guinea. The design features the shield of the Royal Arms surrounded by a garter reading HONI SOIT QUI MAL Y PENSE (“Shame on him who thinks this evil”). The legend around the primary design reads BRITANNIARUM REX FIDEI DEFENSOR, meaning “King of the Britains, Defender of the Faith.” The military guinea was issued initially in 1813 as a one-year-only design and is one of the world’s rarest British numismatic pieces. It was estimated that a total of 80,000 pieces were minted, but this mintage was not confirmed. The coins’ design is attributed to Nathaniel Marchant (1739–1816) noted gem engraver and medal designer. 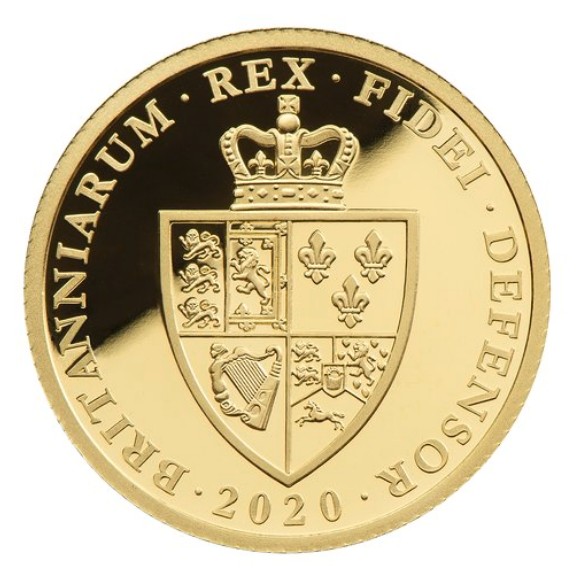 The half guinea (50-pence) coins depict the distinctive Coat of Arms included on the well-known spade guinea minted from 1787 to 1799 and representing the realms within the United Kingdom during the near 60-year reign of King George III. Featuring one of the most recognised guinea designs, the original featured a crowned shield of the Royal Arms. Introduced in 1787, these coins were struck until 1800 and earned the nickname “spade guinea” due to its resemblance to an old long-handled spade or shovel. It noteworthy to mention that the coin’s reference to a “spade” may have also alluded to the nickname of King George III who was known colloquially as “the Farmer King.” The spade guinea’s design is the work of Lewis Pingo (1743–1830) 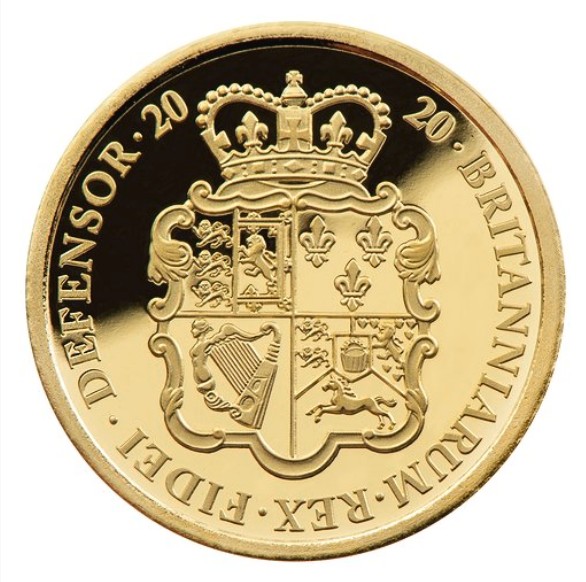 Finally, the quarter guinea (20-pence) coins highlight the rose crown design minted initially from 1761 to 1786. The quarter guinea denomination was only ever issued twice, once in 1716 and later in 1762. The coins’ small size meant it was prone to loss, which made it unpopular. The last mintage featured the ornate crest representing England, Scotland, France, Ireland, and the German possession of the Hanoverian dynasty. Commonly referred to as the rose guinea (it was due to the shield’s shape), which was compared to a rose-like form. A minting masterpiece of its time, the design was continued from one-guinea coins minted from the reign of King George II beginning in 1727. A total of 1,135,000 quarter-guineas were struck in 1762, and the design was seen on one-guinea coins from 1761 to 1786. The rose shield’s design is attributed to engraver John Croker (1670–1741).

The guinea, equal to 21 shillings, is especially significant to King George III, as they were last minted during his reign in 1813. Historians remember King George III as the King who lost the colonies, when, in 1776, many of Britain’s American colonies were soon lost in the American War of Independence. Despite this fact, the guinea coins minted during his reign were in plentiful supply in the United States and may have been the inspiration for America’s new five–dollar, or half eagle, gold coin first struck in 1795. Produced in .9167 gold and containing 8.75 grams with a diameter of 25 millimetres, it closely resembled the guinea, which was also minted from the same gold alloy. With the introduction of the Great Re-Coinage Act of 1816, the guinea coins were discontinued in favour of a new gold pound coin, or sovereign, of 20 shillings that same year. 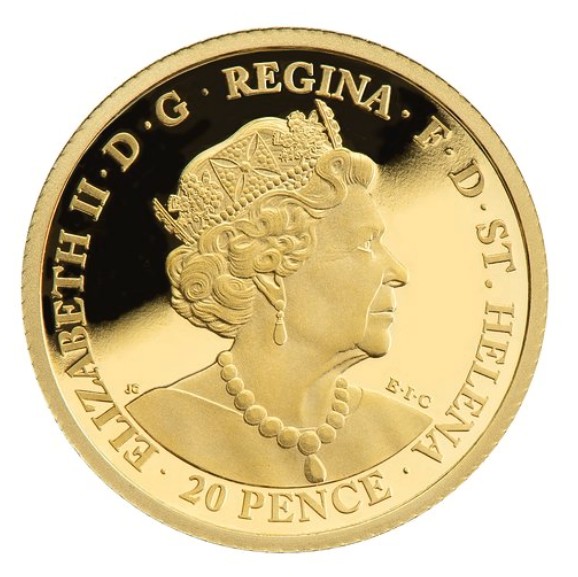 The obverse bears the newest commonwealth effigy of Her Majesty Queen Elizabeth II created by engraver Jody Clark. The text around the Queen’s portrait includes the name of issuing authority of St. Helena and the decimal denomination placed below the Queen’s likeness. Each coin also features the EIC provenance mark also shown on the obverse.

The East India Company Bullion Ltd — in association with the treasury of St. Helena, are pleased to offer the one-guinea Proof quality coins as an individual purchase, or a three-coin set including all denominations is available with a strict mintage of just 200 sets worldwide. Presented in polished hardwood custom cases, the one-guinea and three-coin set is accompanied by a certificate of authenticity. Additional information is available from the website of the East India Company.

King George III has the distinction of being the first monarch of the Hanoverian dynasty to have been born and raised in Great Britain. Unlike kings George I and George II, he spoke English as a first language, and although he was elevated to the status of king of Hanover in 1814, he never visited his subordinate realm.

King George III was the first monarch to have been crowned king of the United Kingdom of Great Britain and Ireland on the 1st January 1801 when the two kingdoms were officially united as one realm until his death in 1820.

In 1761, King George III married Princess Sophia Charlotte of Mecklenberg-Strelitz (1744–1818), and although it was a marriage of great diplomatic value, their union was also known to have been a love match. They welcomed 15 children: Nine princes and six princesses. Most likely unaware of Queen Charlotte’s death at the age of 74 due to his own infirm state, George III would survive his wife by just 14 months.

Shortly after the king’s marriage, he bought Buckingham House, known today as Buckingham Palace, in 1761 for his new bride. Located close to St. James’s Palace, the seat of the British court, the new residence was used as a family home and was known then as the Queen’s House.

It was during the reign of King George III that Great Britain became regarded as a significant world power, having defeated France in the Seven Years’ War.

Further wars against revolutionary and Napoleonic France from 1793 concluded in the defeat of Napoleon at the Battle of Waterloo in 1815, ultimately resulting in Napoleon’s downfall.

George III was colloquially known as “the farmer king” or “farmer George” due to his agricultural interests and, in part, was a playful pun.

The king was known to suffer severe bouts of illness in 1788-89 and again in 1801, becoming permanently mentally ill in 1810. As he was declared unfit to rule in the last decade of his reign, a regency was established under his eldest son as prince-regent, and later George IV, in 1820. It is widely believed that George III’s mental instability was caused by a hereditary physical disorder called porphyria.

The coinage of Great Britain underwent the most significant changeover in 1816. At this time, the guinea, equal to 21 shillings, was last minted in 1813, and a new gold pound coin of 20 shillings was introduced in 1816.

Until the reign of his granddaughter Queen Victoria (1819–1901), his life and reign were longer than those of any of his predecessors. George III lived for 81 years and 239 days and reigned for 59 years and 96 days and is presently the third longest-serving British sovereign.