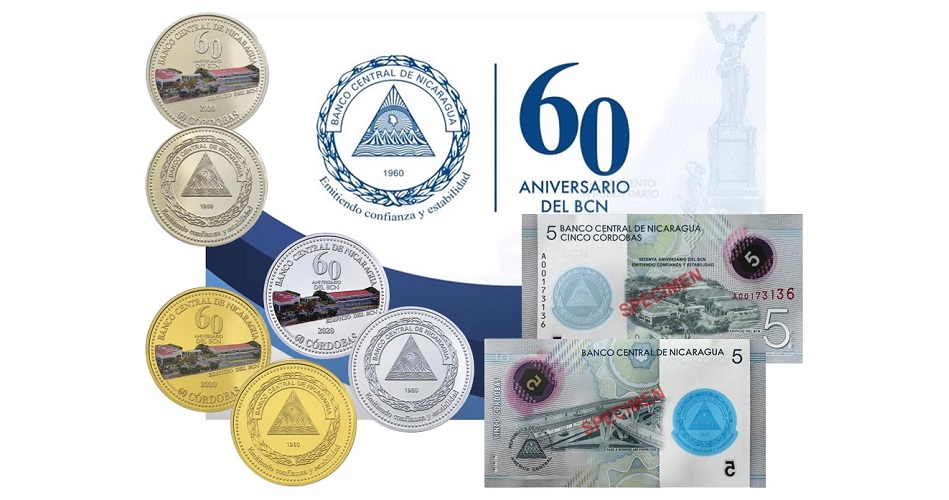 The Banco Central de Nicaragua has released into circulation (1st October) new commemorative five-cordoba (U.S. $0.144) banknotes that are part of the celebration of the 60th anniversary of the founding of the Central Bank of Nicaragua, which came into being on the 16th September 1960. Successors to the Banco Nacional de Nicaragua, a commercial entity founded in 1911, the Banco Central was reorganised as the national reserve of the Central American country following changes in government structure. With its formation, Nicaragua became the last Central American country to inaugurate a central bank. Their activities commenced from the 1st January 1961, which included the issuance of currency, taking over from the Banco Nacional. 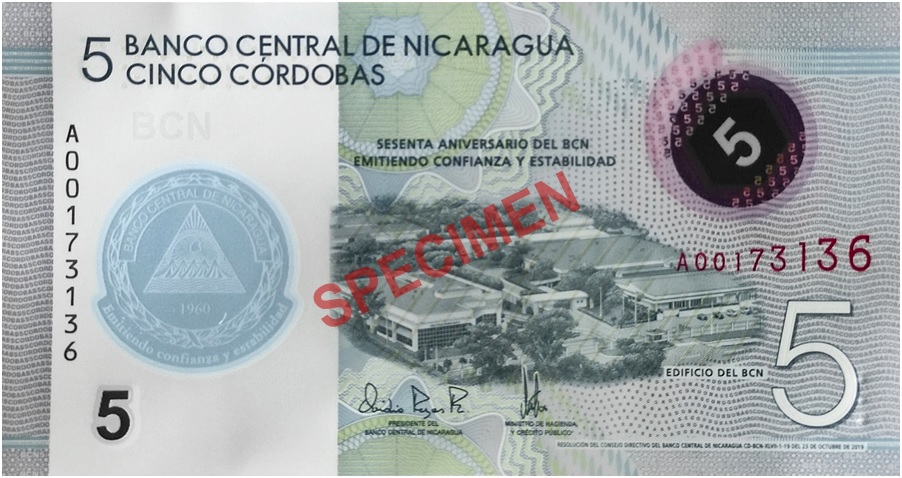 The new five-cordobas is the first issue as a banknote since 1995. The denomination was replaced with a coin of the same face value in 2000. The new note is printed on polymer and is grey in colour, measuring 126 by 67 millimetre. Depicted on the face side is the compound of the Banco Central de Nicaragua with ornamental guilloche designs in the underprint. 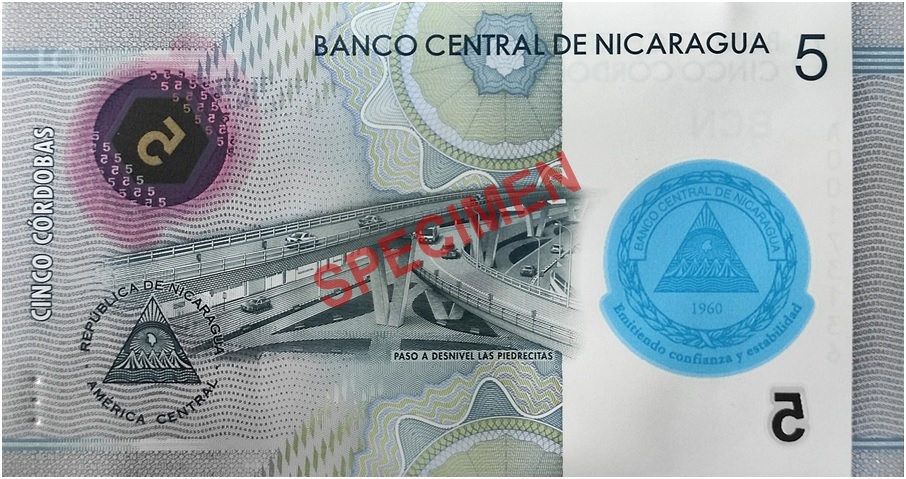 The back side includes a depiction of Managua’s Las Piedrecitas Desnivel Pass, considered as one of the country’s exemplary engineering and architectural projects representing a showpiece of Nicaraguan construction. In addition, the BCN logo is displayed on both sides of the banknote, which also serves as a transparent window.

Engraved print: On the face side, the design of the Banco Central and text at the top of the note is printed using an engraved process. The raised print can be felt by the fingertips.

Tactile application: From the face side, a series of three dots in a vertical direction is located on the lower-right corner and was added to aid visually impaired persons to identify the note.

Watermark: A watermark effect can be seen towards the upper-left corner viewed from the face side; the initials BCN is visible when the note is held up to a light source.

Iridescent strip: Viewed from the back side, a vertical strip containing the numeral in triangular shapes can be seen when the note is viewed and tilted under a light source.

As part of the 60th anniversary of the Banco Central, new collector coins have also been issued. Produced by the Mint of Poland at their facilities in Warsaw, the gold, silver, and base metal coins are all denominated as 60 CORDOBAS and share the same obverse and reverse designs. 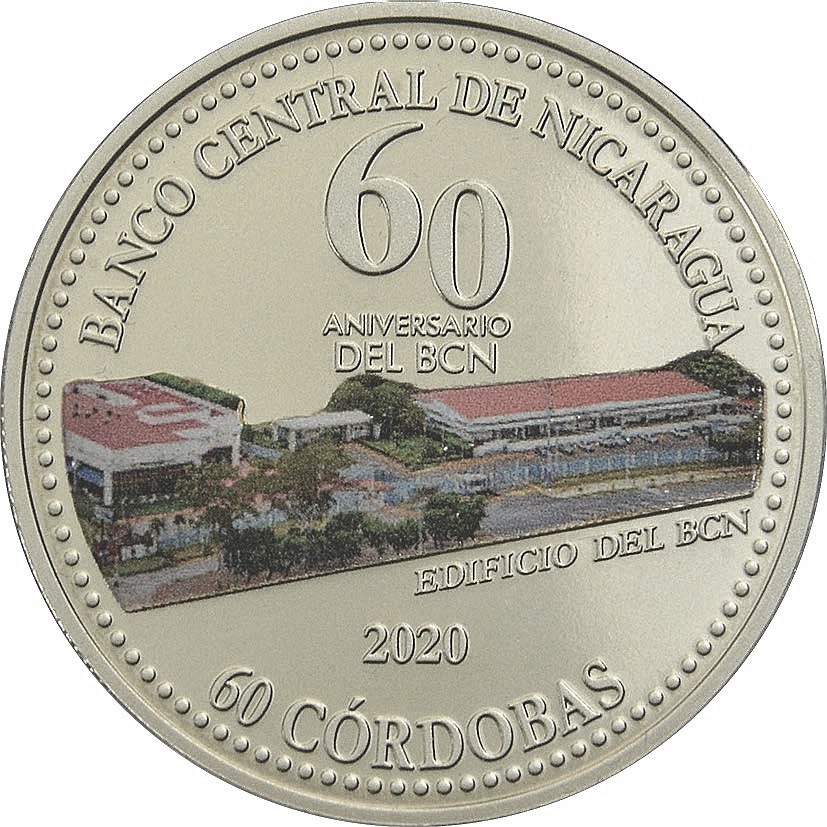 The obverse side includes a colour illustration of the Banco Central de Nicaragua located in Managua. The commemorative 60th-anniversary logo is placed over the bank with the text BANCO CENTRAL DE NICARAGUA positioned over the primary design along the edge. The year of issue, 2020, and the denomination of 60 CORDOBAS are seen just under the bank’s image. 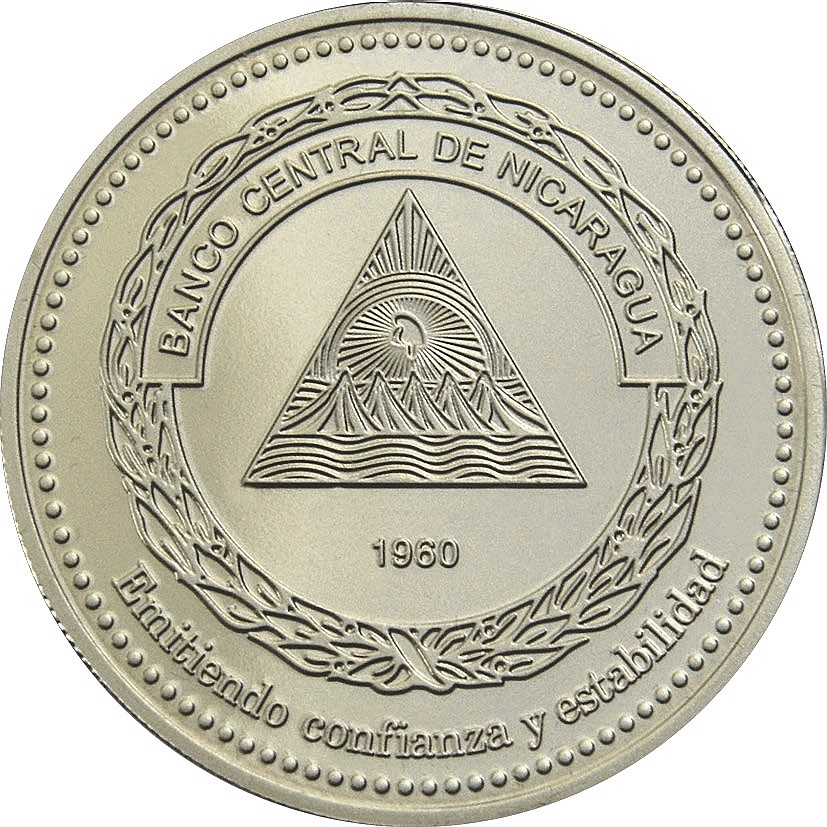 The reverse side includes the official insignia of the Banco Central, which resembles the country’s own crest consisting of a triangle signifying equality, while the rainbow signifies peace, the Phrygian cap symbolises liberty, and the five volcanoes represents the union and brotherhood of all five Central American countries. Below the crest is the year of the Banco Central’s establishment, 1960, and the text EMITIENDO CONFIANZA Y ESTABILIDAD (“Issuing Trust and Stability”).

The five-cordobas banknotes are available from commercial banks and are intended for general circulation. The commemorative coins will be sold at the BCN retail windows from the same date of the release of the commemorative banknotes. The gold Proof quality coins are encapsulated and presented in a hardwood natural finish case, accompanied by a certificate of authenticity. The silver coins are encased and presented in a black matte vinyl case, accompanied by a certificate of authenticity.

A catalogue of banknotes and collector coins available from the Banco Central de Nicaragua can be downloaded here.