Each year about this time the main holdering companies announce changes to fee structures, typically trying to hold the line for hobbyists while ensuring their own bottom line. Last year, for instance, PCGS announced a “Gift to the Hobby,” ending the annual $149 subscription fee to www.PCGSCoinFacts.com. This year, Numismatic Guaranty Corporation (NGC) and Numismatic Conservation Services (NCS) have made submission options more flexible with some modest but important savings.

The most important, in my view, does not concern NCS conservation changes. According to its news release this week:

The most important hobbyist and dealer changes are linked to NGC grading tiers and services. The inconvenient five-coin minimum submission has been removed from the Modern Tier, expanded to all U.S. or world coins, 1955 to present, as well as from the Specialty Gold, Gold, and Economy tiers.

To be honest, that five-coin minimum requirement was ill conceived from the get-go and prompted me to send many of my coins to PCGS, especially when they dealt with toned coins, smaller gold, and scarcer modern condition rarities. Why the Sarasota-based business required this had always been a mystery to me because it sent a subtle message, intended or not, that graders’ time was not worth the price of submission unless at least five coins were on the table.

Regular readers of Coin Update know that I repeatedly criticized NGC for ending crossover service for all but PCGS coins, even though the NGC Registry accepts PCGS while PCGS doesn’t accept NGC, as in this article.  That, too, sent me and other hobbyists to PCGS, which capitalized on that NGC shortcoming by offering specials on crossovers, most prominently in front of high-end collectors at the Long Beach Expo. 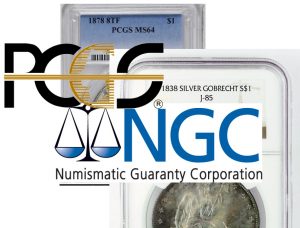 Coin Update, one of the few numismatic publications that reviews coin-holdering operations, has criticized and praised both NGC and PCGS in the past. In the main, PCGS gets cranky when tested but makes changes nonetheless, as it did when we criticized services, dropping fees for plus grades and allowing Secure labels on Economy submissions; NGC remains rather stubborn. Here’s one of my more high-profile examples, concerning labeling of Proof “details” coins.

NGC offers a range of imaging services but also takes photos of graded coins without charging fees; it copyrights them, oblivious to the fact that collectors have been making screen shots for years. But this is definitely a grading plus for the company. PCGS has offered its excellent TrueView photography in the past as a quarterly special, but can do more to promote the imaging service on a regular basis, as the company offers great digital amenities, including online albums for sets.


While it is true that NGC policies have sent me and others to PCGS, the latter has had slower posting of submissions and turn-around times, especially in the summer. For instance, one of my Economy submissions that posted on July 21 shipped on Sept. 19. More recently, two of my submissions that were received on Nov. 26 posted on Dec. 2. Yes, I know about holidays and business days; but PCGS needs to quicken the grading process. Its slow times have sent me back to NGC on nine submissions since August, and the company did a thorough and speedy job on each submission, allowing me to send coins to auctions.

In the end, NGC’s press release is good news for the hobby. Despite my demurrals about the two top grading services, I would be lost without them. And we need two of them, too. Take it from an old reporter who worked for years for United Press International, the chief rival to the Associated Press. We competed as ardently as NGC and PCGS, and the news consumer was served in the process. No need stating how the quality of news has eroded without mainstream competition. I’m just grateful that our holdering services compete with the interest of the hobbyist in mind. (Yes, I know that comment inspires alternative views about fees, grading disputes, and other concerns; but I accept that, as collectors are a testy lot.)

What are your views? As always, sound off in the comments section!  ❑