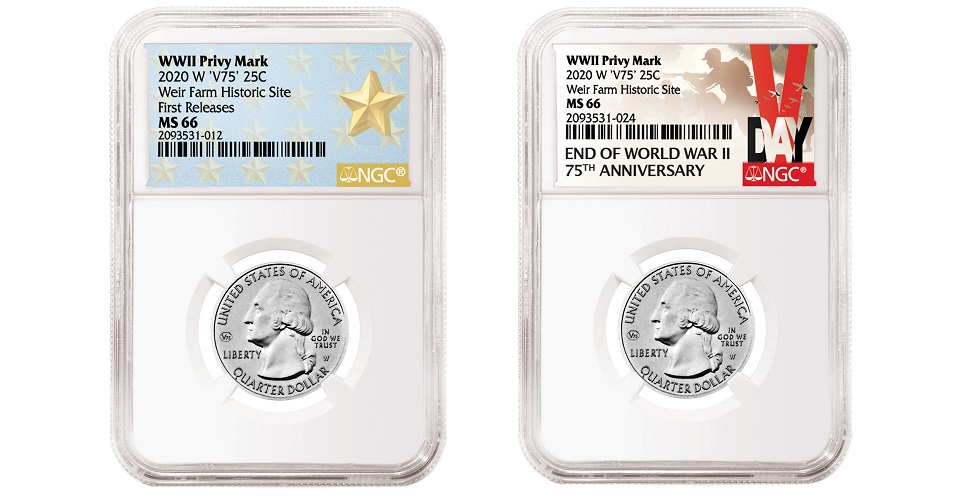 Sarasota, Florida (April 6, 2020) — Starting in April 2020, the U.S. Mint will release a limited mintage of 2020-W quarters directly into circulation. Significantly, these quarters feature a V75 privy mark to commemorate the 75th anniversary of the end of World War II. It is extremely unusual for a U.S. coin to have a privy mark, especially a circulating U.S. coin.

Numismatic Guaranty Corporation (NGC) has created a bold new certification label to celebrate the release of the 2020-W quarters with the V75 privy mark, provided for no additional fee by default for all submissions. The popular NGC West Point Gold Star Label is complimentary by request. A special grading fee of $20 per 2020-W quarter includes the popular NGC Early Releases or First Releases designations, if applicable.

NGC graded more than 28,000 2019-W quarters — the first quarters to ever feature the “W” mint mark of the West Point Mint. Indeed, the 2019 program was extremely popular, as collecting from circulation is a storied tradition in American numismatics. Experienced and novice collectors alike enjoyed hunting for the 2019-W quarters, and high-grade Mint State examples have become especially desirable. A 2019-W San Antonio quarter graded NGC MS-68 is currently valued at $700 in the NGC Price Guide.

As for the V75 privy mark, it is notable because circulating U.S. coins rarely feature a privy mark. Historically, the purpose of privy marks was to identify an aspect of a coin’s origin or to prevent counterfeiting. For modern coinage, privy marks are design features used to honor a special event — in this case, the end of World War II.

September 2, 2020 marks the 75th anniversary of the end of the Second World War, which began in 1939 with the invasion of Poland by Germany and culminated with the capture of Berlin and surrender of Japan in 1945. Because privy marks are so uncommon on U.S. coins, the V75 privy mark is a fitting tribute to this singular event in history.

NGC is one of the world’s largest and most trusted third-party grading services for coins, tokens, and medals, with more than 45 million collectibles certified. Founded in 1987, NGC provides an accurate, consistent, and impartial assessment of authenticity and grade. Every coin that NGC certifies is backed by the comprehensive NGC Guarantee of authenticity and grade, which gives buyers greater confidence. This results in higher prices realized and greater liquidity for NGC-certified coins. To learn more, visit here.