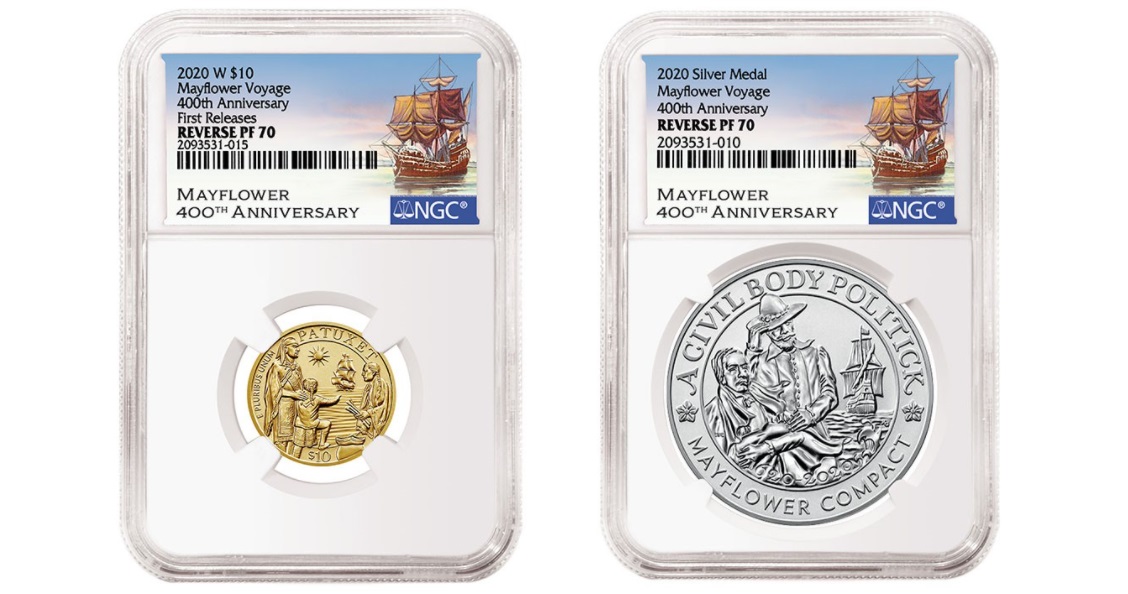 The coin and medal beautifully represent the momentous Mayflower voyage that brought the Pilgrims to America.

On November 17, the U.S. Mint is releasing a Mayflower 400th Anniversary 2020-W gold coin and silver medal, both with a Reverse Proof finish. This special finish distinguishes the coin and medal from their companion pieces featured in the 400th Anniversary of the Mayflower Voyage gold and silver sets, which are a collaboration between the U.S. Mint and the Royal Mint of Great Britain. For more information about submitting the sets, click here.

To celebrate the Mayflower 400th Anniversary gold coin and silver medal, Numismatic Guaranty Corporation (NGC) is offering its attractive Mayflower 400th Anniversary Special Label by default for no additional charge. Featuring a full-color rendering of the Mayflower as it approaches shore, the label enhances the thoughtful narrative told by the coin and medal. The popular NGC Early Releases and First Releases designations and labels are also available for coins and medals received within the first 30 days of release.

The 2020-W Reverse Proof gold coin, struck at the West Point Mint, portrays a Wampanoag family watching the Mayflower sail toward them on the obverse and a Pilgrim man and woman on the reverse. Both depictions represent cultures on the precipice of change — uncertain, curious, and hopeful.

The 2020 Reverse Proof Silver Medal, struck at the Philadelphia Mint, shows a Pilgrim family on the obverse, whose grim expressions tell of their hardships, while the Wampanoag man and woman on the reverse farm the land and enjoy a successful harvest, which they will soon share with their new neighbors.

The following designations are available for this coin and medal:

The following labels are available for this coin and medal:

NGC’s First Day of Issue designation and labels are available for select bulk submissions only. To qualify for First Day of Issue, coins must be purchased within one day of the first day that a mint makes a new coin issue available for sale and must be received by NGC or an NGC-approved depository within one week of the release date. NGC will require that the submitter provide adequate evidence (including purchase receipts) to demonstrate the date when the coins were purchased.