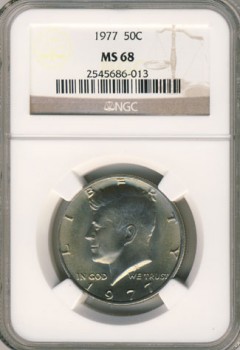 When PCGS announced a new fee structure and revised and upgraded services in November 2012, detailed in this post, I asked NGC if it, too, planned to hike fees as well.

At the time the company had not nailed down specific increases but suspected that it, too, would follow suit soon after the PCGS announcement.

So when the NGC email blast arrived this week, I had anticipated dollar-for-dollar increases to keep in lock step with PCGS and was pleasantly surprised at what I learned from the Sarasota-based company. This will be especially good news for dealers or club members who send in bulk submissions, as we shall see.

Changes are minimal in the most popular submission categories of Economy ($17 per coin), Modern ($14) and Early Bird ($30). The fees remain the same–no hikes per coin. A small change occurs in the Economy category, which retains its $300 maximum per coin but now excludes gold bullion. (The only gold bullion that might conceivably be included would be the $5 coin, so again, no big deal.) Another slight change occurs in the Modern and Modern Special categories, which now set maximum value per coin at $2,500.

A minor change occurs in the High-Value Walkthrough category, which retains its $250 per coin for 24-hour turnover, but now sets the maximum at $250,000 rather than a half million.

Also, more convenience has been introduced with one submission form for both US and World coins. This does not mean, of course, that you can mix US and World Coins on the same form, as they must be kept separate. Collectors Society members and dealers will use the same submission form, too.

The big news about the NGC price hike is how it compares with the PCGS hike, which took effect on Jan. 1, 2013.

With margins in the coin business so narrow, those types of savings quickly add up. NGC also typically has quicker turn-around times for submissions, meaning dealers can get their coins to shop and auction quicker.

PCGS turn-around times have slowed to a glacier pace, with current stats showing 41 business days for U.S. Economy and a whopping 72 for World Coins. NGC turn-around times for U.S. Economy are 21 days and 24 for World Coins. (My own PCGS Economy Submissions are taking two full months at present, which impacts cash flow for coins that I have to resell because they do not grade higher than ones in my set registries. I can only imagine what the slow PCGS pace is doing to dealers who have coin shop overhead and other expenses.)

All in all, the revised fee structure at NGC is good news for dealer and hobbyist alike. What are your thoughts?