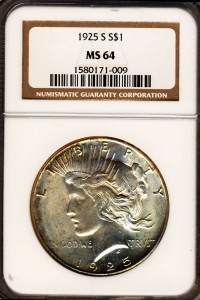 The above title–“NGC ‘Plus’ Earns a ‘Star’ Over Insecure PCGS Plus”–pains me to write, as I am a member of PCGS’s Collector Club and for many years preferred its grading to NGC in the latter’s “body bag” days when every fourth submitted coin seemed to earn that defeatist designation. Then PCGS came out with its “Genuine” label, and NGC followed suit, slabbing problem coins and spelling out details rather than obscuring them with numerical codes.

Now it seems every fourth coin from PCGS is genuine (but I digress).

Last month I criticized “The Big One” announcement by PCGS concerning the company’s “Secure Plus” designation in articles published in Coin Update, one titled “PCGS Secure Plus Makes Me Feel, Well, Insecure” and the other, “Take 2 on PCGS Secure Plus: Imagine a New Numismatic World.”

To summarize, I criticized the separate price list to receive a plus designation by PCGS. Also, as I am director of a communication school at a research institution, I thought the marketing of Secure Plus was elitist and self-serving, with scant mention of PCGS using its new computerized system and grading protocol to analyze and fix previous erroneous grades. Instead, the Marketing Department focused on “coin doctors” re-submitting coins.

What irked me more concerning promotions for “The Big One” was the PCGS “We’re Number One” theme–subtle but omnipresent. Go to its “PCGS Secure Plus™ – Frequently Asked Questions” site and see that thread running through simple questions and answers by company President Don Willis, such as No. 63:

Q: What will happen if I spend $5 K on an NGC coin in a Heritage auction and I send it to you with cross at any grade – (can you do the scan through the slab? it needs to be cracked out, doesn’t it?)

DW: Crossovers are not accepted in PCGS Secure Plus. You can crack it out and take your chances, or stick to buying PCGS-graded coins. Same as always.

But enough about PCGS. Why does NGC earn a star for its promotion of its “plus” program? Well, to begin with, the promotion is about the customer rather than the corporate reputation. It did the right thing by allowing PCGS to announce the Big One and then using Internet to get feedback on what its own plus program should be. 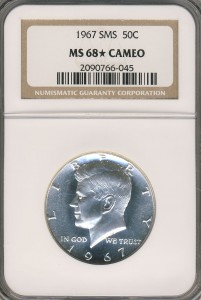 One of the best articles on that was in the April 13 Coin Update, titled “Recommendations for NGC Plus Grading” by Michael Zielinski. I agree with him on all counts, and so did NGC, for the most part. Zielinski believed the company should designate plus grades not only for classic coins up to 1964 but also for moderns. (NGC has excluded moderns from its program.)

By letting PCGS take the spotlight last month, NGC also allowed its rival to take some heat. NGC seemingly analyzed complaints (including several that I and Zielinski made) and devised a customer-friendly program that:

You can read NGC’s press release about the new service here and frequently asked questions about star and plus designations here.

My one quibble with NGC using two symbols, plus and star, is its claim that the plus designation will be used for coins that “must have above-average eye appeal.” Nah. Use the plus for strike and condition and the star for eye appeal. A Morgan dollar with average luster but with an outstanding strike and few, if any, bag marks should be able to earn a plus symbol.

If a coin can qualify for a plus and a star, let’s not have overlap in what they mean. It’s confusing; more to the point, it is inaccurate numismatically.

That’s about all that I can criticize about the NGC plus program.

That’s the major difference between the two services and why NGC earns a star for its plus.