In past columns, club meetings and coin shows, I have questioned grades and attributions of third-party companies that too often seem focused on profitability rather than on predictability, as evidenced in the first-strike fiascos that resulted in litigation and trademark issues.

My take is more journalistic than numismatic in that these appear to be attempts to redefine through rhetoric a profitable marketing concept, for as long as collectors are willing to pay a premium for the attribution, companies will provide one.

As for premiums, I’m willing to pay more for a coin with NGC’s “star” designation.

NGC puts a star on coins with “exceptional eye appeal” or other enhancing characteristics such as an MS-65 proof cameo half “not necessarily close to the PF 66 grade” but almost an ultra cameo one.

I have several NGC graded coins with a star on the label. Rather than use them as the basis for this column, I strove to be more objective and purchased from three different online sellers three 1956 Type II Franklin halves graded as PF67, PF67 cameo, PF67 cameo star.

Here are pictures of the coins. 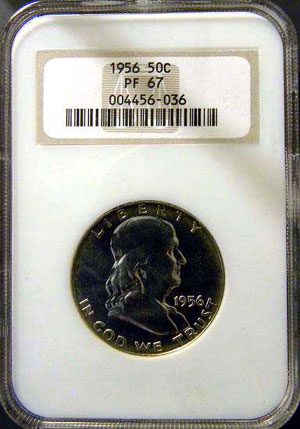 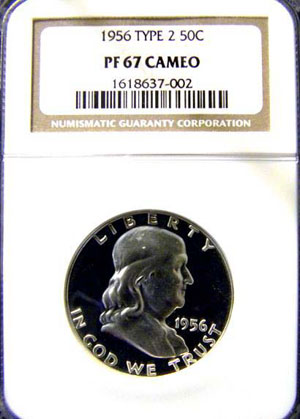 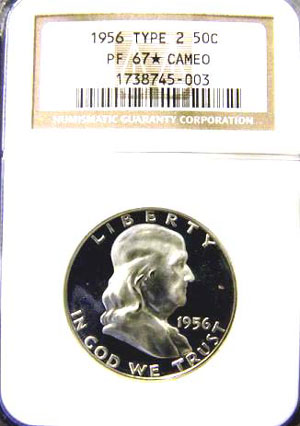 Even in photos you can see the surfaces of each coin merit the relatively high PF67 grade. The cameo coins feature frosted devices on observe and reverse (not shown here because of space considerations). The starred cameo has a richer “caked” appearance.

You won’t be able to see from photos that the starred cameo also has clear fields on both sides whereas the non-starred cameo has tiny pinpoints of distracting tone at the rims.

I agree with each NGC designation.

Moreover, I checked other NGC stars in my collection. Some featured magnificent rainbows, suggesting superior eye appeal. (Toning depends on color and patterns, for better or worse.) Better to have clear fields and sharply defined cameoed devices than speckles, mottles or other distracting tonal patterns.

NGC claims that no other “innovation in third-party grading has ignited the spirits and delighted the fancy of rare coin collectors quite like the NGC Star Designation.”

You may disagree with that marketing claim, but also acknowledge that a star trumps an early release or first-strike designation.