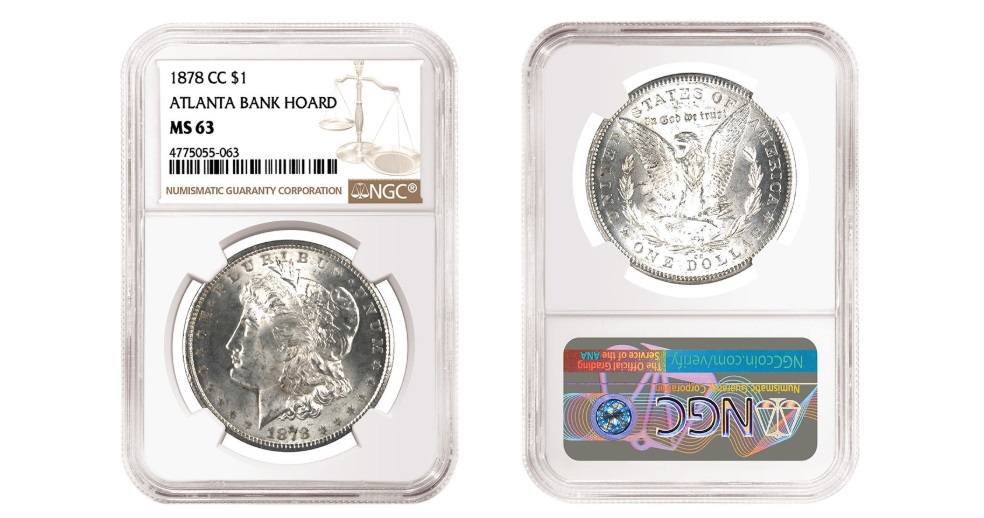 The hoard included many rare dates and coins with similar and appealing toning.

Numismatic Guaranty Corporation (NGC) recently certified more than 250 Morgan silver dollars from a cache amassed at the Atlanta Federal Reserve Bank during the 1950s and 1960s. The hoard includes many rare dates and coins with similar and appealing toning.

A discovery of a previously unknown hoard of coins is always exciting for numismatists. To distinguish these Morgan dollars, NGC has given each coin the pedigree “Atlanta Bank Hoard.”

“We were very pleasantly surprised by the quality of the Atlanta Bank Hoard coins,” commented Mark Salzberg, NGC chairman and grading finalizer. “The group contains many rare dates, and most of the coins are also attractively toned.”

The Atlanta Bank Hoard was discovered by Bob Harwell of Hancock & Harwell, a rare coin and precious metal brokerage firm based in Atlanta. A woman called him one day and said that she had hundreds of Morgan silver dollars that her father had collected at the Atlanta Federal Reserve Bank. His father (her grandfather) had worked at the bank, and on Saturdays, he took his son to work with him and let him look through bags of silver dollars for the most valuable coins.

“When the owner of the Atlanta Bank Hoard gave me an overview of how the collection came to be, it brought back many fond memories. When I was collecting coins during the 1950s and 1960s, my future partner’s father would take us to the bank, lock us in the vault and let us hunt through bags of coins,” shared Harwell. “The amazing thing about this hoard is that while most of the coins are circulated, they all have gorgeous toning. I was impressed.”

Harwell contacted Jeff Garrett, president of Mid-American Rare Coin Galleries, to help with the research and sale of the hoard. Garrett submitted the coins to NGC for certification to ensure that the coins were accurately graded and their pedigree was preserved.

When Bob told me about the Atlanta Bank Hoard, I knew that the first step would be to get the coins certified by NGC to both preserve them and maximize their value. As always, NGC did a fantastic job with its grading, attributions and encapsulation.

Now that the coins have been certified by NGC, Morgan Dollars pedigreed to the Atlanta Bank Hoard can be found in the free NGC Census.